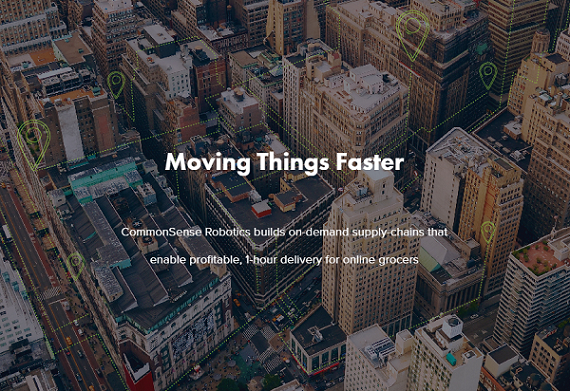 If you had asked me a few years ago if I'd be willing to have someone else select my groceries for me, and deliver them to my door, I'd have said, "No way, I don't want someone else picking my fruit for me!" Now it's something I do fairly regularly, but not as often as I'd like to, simply because of the price. The store I use has a $50 minimum, plus a delivery fee, so it's not a service I'm going to more than once a week, at most.

The high cost is just one of the problems with online grocery delivery, Ran Peled, Head of Marketing at CommonSense Robotics, a company that uses AI to allow grocery retailers to offer sustainable, affordable one-hour delivery to their customers.

"We think that something is broken with the supply chain of food. We think that we are not getting food delivered fast enough, cheap enough, in a range that we’d like, in a quality that we’d like to our homes to accommodate our busy lifestyles and and the shrinking amount of time we have to wander around the supermarket, as we all did 20 years ago. As consumers, we look at it as something is just not serving right type of demand that is has been created in the past few years in Western countries. People want on demand, high quality, fresh produce," Peled told me in an interview.

"The other problem is that online grocery is a losing business for every retailer that we speak with. From the largest ones to the smallest ones, 90 percent of them losing a few dollars for every order that comes through the Internet because it’s an industry that used to rely on a consumer finding two hours in a day, taking his own car, putting money into fuel, walking around the store, picking everything himself, putting it in his trunk and then driving back home. Now the consumer doesn’t want to do that anymore but how do you keep a sustainable business if you don’t have those consumers walking for you anymore and you need to start serving them?"

CommonSense Robotics solves these problems by automating the process of selecting items, thereby reducing the cost and time associated with online delivery. The company, which has currently has one fulfillment center in Israel, is already on its way to expanding to Europe and the U.S. so on Thursday it announced that it raised $20 million in Series A funding to help make that happen.

The round was led by Playground Global and includes previous investors Aleph VC and Eric Schmidt’s Innovation Endeavors. This round bringing its total funding to $26 million.

Founded in 2015, the Tel Aviv-based company works directly with retailers, providing them with fulfillment as a service. CommonSense gets the inventory directly from the retailer, and when a customer submits an online order, CommonSense puts it together and then interfaces with a third party delivery company to take the order directly to the consumer.

While CommonSense can deliver anything a store offers, from dry goods to paper products to cleaning supplies, it puts an emphasis on fresh produce, and there are two reasons for that, Peled told me.

"First, our technology allows us to shrink the facilities into city units. That means we can get very close to the consumer, in terms of distance, and by being very close, we can fulfill fresh produce in high quality because it doesn’t get rotten, heated or squashed. Usually when you want fresh product you want it fast, and the dry goods you don’t really mind getting them tomorrow or in two days," he said.

"Second, a lot of online orders are today limited by their frequency by the consumers because they are mostly dry. According to a Nielsen study, about 84 percent of people who don’t order online said they don’t trust anyone to pick their produce for them. So I think there’s a major trust issue in fresh produce in the mind of the consumer, and if we are able to tap into that challenge and convince consumers that we can deliver high quality, fresh produce every time then I think we’d probably touching a large opportunity for our clients."

The most innovative thing about CommonSense is it's use of AI and automation, which help reduce the time to fulfill an order, cutting it from the 20 to 30 minutes it would take a person to just three and four. That then allows stores to send out more shipments. The company also reduces costs for the retailer by charging them a fee for each delivery, which Peled says is less than what they would have to pay a person to do the same job.

All of this results in a profit on each order for the retailer in a space where they are currently losing money on each order.

"Normal physical retailers operate at about 3 percent operation on margins, and our model shows that we can put them above that. It's like what you saw happen to banks: once they understood that an online customer is worth more than an offline customer, you started seeing banks closing branches and moving customers online. The first step of the ROI building will be to help the retailer mitigate loses and turn a profit from online, and then, a few years down the line, we believe that profitability will be higher than it is in a physical store."

The new funding will go, in part, to getting those new facilities off the ground, as well as to hire. A year ago the company was 20 people, and now its 70. In addition, the company will also be using the new funding to continue to develop its AI capabilities.

"The simple angle of it is that we will always try to improve our operations and efficiencies, meaning producing robots that can have lower costs and lower maintenance, and having the AI system increase the efficiencies of our hardware. Imagine that after a year of running with retailers, you know quite well how orders are being put through and what are the best selling products every week and day and month and every hour. Then you could have your AI really improve the efficiencies of storing and fulfilling the goods. This is the simple angle; we want to advance those robotics and AI to allow us to eventually offer lower prices for our retailers, to allow them make higher margins online and then to boost the entire online space into the tipping point that we are all waiting for," said Peled.

"The more sophisticated angle is that right now we are architecturally what you'd call a 'goods to person,' meaning that robots are bringing tons of products to areas where human beings are  then taking them from a box to a bag. We have humans picking and bagging. We will probably be able to help our clients more when we can automate those areas as well. We can have a robotic hand that can deal with 40,000 or 50,000 different products that an average supermarket has. A hand that can pick tomato or a bottle of Coca Cola or a bag of chips, with the knowledge this is what it's dealing with. We want to introduce those kinds of solutions that are, right now, not in our product."

Despite the low percentage of sale that comes from online delivery currently, that  number doesn't tell the whole story. In fact, a sizeable percentage of households in the U.S., around 23 percent, are already using these services. With the advancements made by CommonSense, the company believes that it can grow those numbers significantly by improving the cost and quality.

"Customers understand the challenge but they don't like the experience or maybe the offering wasn't cheap or fast enough, or the quality wasn't good enough. The percentage of sale should go from 3 percent to 23 percent in a matter of three to five years because we think that if you look at all the other industries around grocery, they are becoming quite advanced. Grocery is lagging behind and as the consumer will become more and more demanding in terms of time and quality and prices, so I think it will take grocery a shorter amount of time to close that gap than it took other industries as they've already paved the way," said Peled.

"There will be a dramatic shift and the share of wallet going to online is going increase dramatically, as will the percentage of households. CommonSense is positioned right now to be at the right place to allow us to scale once the consumers are ready."