When Venmo was young: the early years

Venmo was acquired only months after launching publicly, and is now owned by PayPal

This segment is on Venmo.

Founders (ages at the time): Andrew Kortina (26) and Iqram Magdon-Ismail (26)

Founded: Venmo is incorporated in Delaware on April 9, 2009

Initial company description: Kortina and Magdon-Ismail, who had been freshman roommates at the University of Pennsylvania, begin to work on startup ideas together in early 2009.

One idea is to make Web-based point of sales software that turns any laptop into a cash register. Another is to allow users to buy MP3s through text message.

"This was getting closer to the Venmo concept we ultimately arrived at, and the detailed wireframes we constructed for this definitely informed a lot of the original Venmo service," Kortina writes in a blog post in 2014.

The idea for a peer-to-peer payments platform comes when Magdon-Ismail is visiting Kortina, but accidentallu leaves his wallet in Philadelphia. Rather than paying by check, or via PayPal, Magdon-Ismail and Kortina come up with the idea of being able to send payments electronically via mobile device.

"Venmo enables anyone with a mobile device to send and receive payments via text message, creating a dialogue between buyers and sellers," the company says in its Executive Summary from October 2009.

"The shift to mobile payments requires a service that captures the subtle gestures involved in everyday cash exchanges. Venmo transactions are personal, with SMS notes that make payments feel like conversations. Venmo's medium for maintaining these social nuances along with the ability to make payments, allows Venmo to take the stress out of exchanging money. The ubiquity of cellphones plus Venmo's magic will create an impenetrable network effect, making Venmo the preferred way to pay for everything."

The name Venmo comes from the the Latin root vendere, which means “sell” and mo for mobile. It was also cheap and available on GoDaddy.

Product, at four months from founding: In August 2009, the Venmo product goes online. The original version of the service occurs over SMS, with the recipient receiving a notification of payment via text message.

The company had been having trouble raising funding, as it was unable to convince them of the product's viability, Magdon-Ismail explains in a 2016 keynote address.

"Our adviser, Sam Lessin, helped us conceptualize the notion of trust, where you could create a circle of friends on Venmo and, basically, share money with them. It's like a shared bank account; any time you charge someone the charge goes through automatically. We were able to garner excitement from investors and then we quickly raised $100k, which allowed me and Kortina to go full time and, on top of that, hire our first engineer," he says.

Product, at eight months from founding: In December 2009, Venmo launches its iPhone app.

During their presentation, Kortina and Magdon ask the audience to try the product by making live donations to the Relief Foundation, an organization sending a delegate of 120 people to Haiti to build an orphanage following the earthquake that occurred earlier that month.

In less than a week, the Relief Foundation raises over $15,000 through Venmo text message donations, $600 of which comes in the three minute demo during the presentation.

Press coverage, at 10 months from founding: In February 2010, Venmo is profiled for the first time, in an article on Gigaom.

“We have the audacity to redo it even though it’s been done many times. We think we can do it better,” Kortina says in the article, speaking of other companies that have done peer-to-peer payments.

Press coverage, at one year from founding: In April 2010, Kortina is interviewed by Rocketboom Tech.

Second funding, at one year and one month from founding: In May 2010, Venmo raises a $1.2 million seed round. RRE Ventures is the lead investor, along with betaworks, Lerer Ventures, Founder Collective, Dustin Moskovitz, Dave Morin and Sam Lessin.

Third funding, at one year and two months from founding: In June 2010, Venmo raises $400,000 in debt financing from one investor.

Product, at one year and three months from founding: In July 2010, eight months after its debut on the iPhone, Venmo launches its Android app. "The result is that you never have to worry about sending money to a friend who is new to Venmo," Kortina tells Mashable. "If you're at dinner and send a friend 50 bucks, she can sign up, instantly verify her account, request a cash out, and the money will show up in her checking account tomorrow — that's way faster than writing/cashing a check or using PayPal."

Launch, at two years and 11 months from founding: On March 20, 2012, Venmo comes out of beta and is released to the public.

“We were waiting to perfect the payment experience before releasing it to the public,” Magdon-Ismail tells the New York Times. “We feel good about opening up now. We’re anticipating lots of volume and we have the right team in place to handle that.”

Traction, at two years and 11 months from founding: Venmo is processing around $10 million in payments every month, and is growing 30 percent on a monthly basis. The company expects to process a total of $250 million in 2012.

Product, at three years and two months from founding, three months from launch: In June 2012, Venmo launches the modern version of its app. It becomes more social, includes the homescreen feed and adds user profiles.

Acquisition, at three years and four months from founding, five months from launch: On August 16, 2012, it is announced that Braintree, a company that specializes in mobile and web payment systems for ecommerce companies, has acquired Venmo for $26.2 million.

The deal with Braintree comes about thanks to Sameer Ghandi, who had invested in both companies and introduced them. Venmo had been looking to be acquired due to increased costs that were about to put the company out of business.

"We felt the product was ready, however, our costs were growing exponentially as our transaction volume was growing. So we were spending lots and lots of money. It would have required hundreds of millions of dollars from investors in order to sustain Venmo, even to the point where it was break even. We had plans to earn revenue but nothing was promising, we had no promising traction, profitability was nowhere near us and everyone was kind of getting antsy. So we started to explore acquisition possibilities because nobody wanted to continue to invest in Venmo," Magdon-Ismail says in 2016.

When Venmo is acquired it is just two weeks before the company is about to go bankrupt.

Traction, at three years and eight months from founding, nine months from launch: In the final quarter of 2012, Venmo processes $59 million in mobile transactions.

Traction, at three years and 11 months from founding, one year months from launch: In the first quarter of 2013, Veno processes $81 million. On September 26, 2013, Braintree was acquired by eBay for $800 million. Both Braintree and Venmo then became part of PayPal, which was owned by eBay at the time. Venmo was leveraged to help to contribute to PayPal’s mobile payments capabilities.

The company recently began monetizing beyond its initial revenue stream, taking a 3 percent fee for when users pay with a credit card. In January of 2016, Venmo announced it was going to allow its platform to be used for payments in mobile apps, meaning online merchants would be able to include a Venmo button, which would attach a user's Venmo account to the app.

Venmo's initial merchant partners included Munchery and Gametime. One month later, it served $1 billion in a single month for the first time. 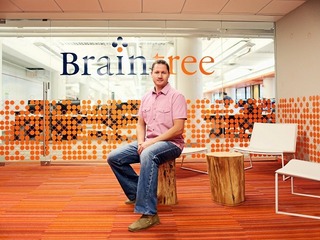 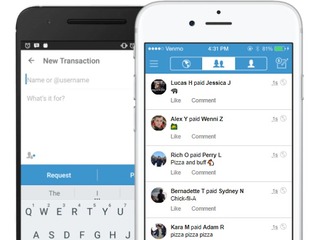 How does Venmo make money?