The company tracks customers with cameras, and automatically charges them as they walk out the door 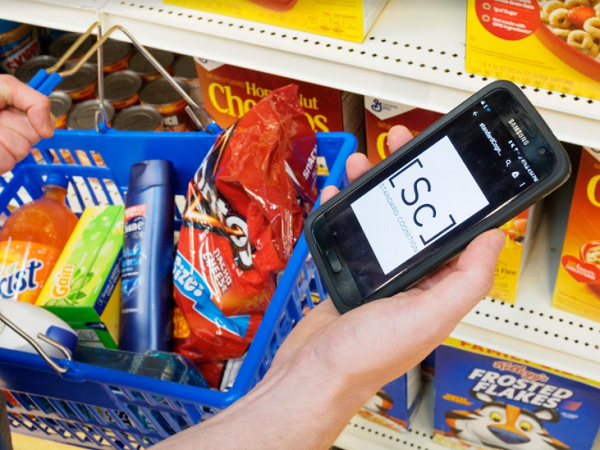 While online shopping offers a convenient and quick experience, one where buyers can get what they want, when they want it and have no hassle in getting it, it still only accounted for 8.5 percent of all retail in the first quarter of this year, according to the U.S. Census Bureau.

But that percentage will continue to climb because nothing kills off-line shopping quicker than standing in a line. We've all been stuck behind an old lady counting her pennies. It's murder.

That's where the solution from Standard Cognition comes in. The company, which wants to entirely eliminate the checkout experience through automation, announced on Tuesday that it raised a $5 million seed round led by CRV (Charles River Ventures), with participation from Initialized Capital, Y Combinator and several smaller firms and angels.

Including this round, the company has now raised a total of $6 million.

Launched in August, Standard Cognition is an artificial intelligence-based system that lets consumers shop and pay without scanning or stopping to check out. It's meant to help retailers reduce their labor costs, improve the customer experience, and increase profit margins by up to 100 percent, while giving consumers a quicker, easier shopping experience.

"We saw a huge problem in the retail area in a few components. One is customer service and customer experience isn't what it can be, given today’s technology. Another one is, smaller retailers are looking to, not just improve their overall experience, but just to stay afloat with rising costs, especially labor costs. Smaller retailers are having a really hard time competing," said Michael Suswal, Co-founder and Chief Operating Officer of Standard Cognition, while box retailers want to give customers a better experience.

"From the consumer perspective, we hope that we can help retailers understand better about what products do well in retail setting, and ultimately lower pricing of goods."

The real driver of all, though, is the hatred Suswal has for waiting in line.

"We're trying to create a world where there are no lines. If we can get rid of that, we believe that people will wind up spending more money, because they'll enjoy shopping better, but also they wont hesitate to run into a store because they'll know they can get out in 30 seconds. They won't have to wait 20 minutes in a line."

The way the solution works is that shoppers are monitored by cameras as they walk throughout the store, and which use machine vision to know what people taking off the shelf in order to know what to charge them for. The customer would then pay one of two ways: either they'd have the Standard Cognition app, or the retailer's app, and they'd automatically be charged for what they walk out with. Or, if they don't have an app or phone, or if they want to pay with cash, they'd be able to easily pay with a machine as they walk out. In either case, no objects would have to be taken out and individually scanned.

"What we want the experience to be is: you walk in, you grab stuff, and literally you just walk out. Or you might start eating something in the store or you might slip something into your jacket, pick something else up, and then walk out. None of that should be seen as bad behavior. We really want to make the stores much more comfortable not just in convenience and time but in how you interact with the space," said Suswal.

For the retailer, installing the cameras is a relatively painless process, one that Suswal says is much less invasive than other similar processes.

"It's a very easy installation process and that was designed on purpose. If you take a look at a system like Amazon has, for example. They use what they call 'sensor fusion,' which requires things like floor sensors, shelf senors, RFID tags, they use BLE. They have a variety of systems to try to accomplish what we’re doing. Because of that, while I'm sure it works very well, it makes it really impossible for installations to occur, at least with any rapidity, into other stores. They'd have to close down the store. rip up the floors, change all the shelving, whereas for us, it's really just putting cameras up on the ceiling, and that's it."

All data is stored on a computer in the back of the store, rather than on the cloud. There's no Internet required to process people so people can check out anonymously and not have to depend on having a good Internet connection.

Opening its own pilot store

You might be wondering how Standard Cognition convinces retail owners to install a system that allows shoppers to walk out of a store without paying for anything. One way it's going to prove it to them is by opening its own store in the next six to eight months. In addition, it will also be launching pilots with select retailers, who will be able to keep their regular cashiers, allowing them to compare their books to see what impact the system has.

In addition to opening its store, the company will also be using the new funding to expand its team by hiring new engineers. The company currently has seven employees and plans to double that a year from now.

"All of our product development hire comes from hiring more engineers and then also what will use our store for. Building out our store and building out our lab really will expedite how quickly we can get to production. Really the spend of the money down comes to hiring talent, building out our pilot store, and buying the compute power necessary to the process go as fast as possible. There are ways to do it with less compute, but if we use more compute power then we can develop faster," Suswal said.

The impact of automation

If a solution like Standard Cognition were to become mainstream, it would no doubt have a major impact on the retailer sector and its workforce, who are already afraid of their jobs being automated. A Pew study from last week found that 72 percent percent of people are worried about a future where robots and computers can do human jobs. A report from last year found that the majority of Americans already think that a robot will eventually take their job.

Suswal acknowledged those fears, but downplayed how much of an issue his solution will actually have pn workers in the industry. While cashiers will eventually disappear, as have so many other jobs in the past as technology came along, he believes that many of those workers will find themselves in other roles in the store, specifically as customer service representatives.

"In this country, when you talk to big retailers, they talk more about hiring specialized people and better service people to take care of customers. They refer to it as a repurposing of labor to make their stores better. Ultimately, they're trying to compete and experience is what everyone's after right now," Suswal told me.

"When I talk to apparel companies, they get excited about taking their best cashiers and letting them go out and get experience and take wings, so to speak, by going onto the floor and helping people answer questions. It's so much easier to purchase when you can hand something to a customer and say, 'Have a great day.' It's a way better experience for the customer and it also gives the store a chance to display and talk about the goods that are in their store."

Ultimately, Suswal wants Standard Cognition to be in every store in the world, but he also envisions the technology being used in numerous other settings and use cases.

"As we get there, there are so any new things we can explore in terms of machine vision in the retail space and outside the retail space. We'll pursue some other low hanging fruit initiatives like security. For example, in the retail space, if we can tell the difference between green t-shirt and a bag of Doritos, or a bottle or motor oil from a a bottle of shampoo, we can also recognize that there's a handgun involved, or a knife involves, or simply violent behavior, recognizing it and alerting the appropriate authorities immediately. We'll be able to know within 1/30th of a second that something like this is happening," he said.

The company has also been contacted by sports stadiums who want to use the technology to identify if bags have been placed and untouched for a certain number of minutes. In another potential use case, a refrigerator would be able to assist shoppers, telling them what they have, what they need, even helping them around the store and allowing them to get items more efficiently.

"Any time you can have a computer understand the physical world digitally, it really unlocks humans to respond better to humans because they're not acting like a computer anymore. They're acting like humans should, and making decisions for humanity, rather than trying to simply track something."