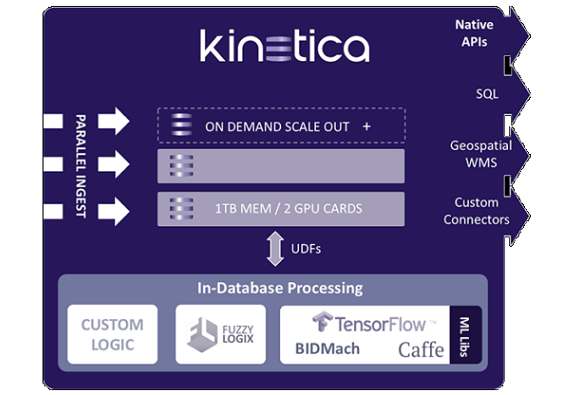 The world is being saturated with data, especially as the Internet of Things, which use sensors generating torrents of streaming data, continues to grow. Of course, businesses want to be able to take advantage of that stream of information, and are looking for a platform that can ingest data and turn it into something useful for them. The problem is how to actually do that, since there's so much of it and a good amount is coming in real time.

That is where Kinetica comes in. It deploys a graphical processing units (GPU) database that is optimized for running machine learning and deep learning models. The result is that it can process data, the company says, 100 times faster than a legacy database, and at a tenth of the cost.

That kind of processing power, and potential savings, has caught the eye of investors, who have just put another $50 million into the company, it was revealed on Thursday. The round was co-led by Canvas Ventures and Meritech Capital Partners, with participation from new investor Citi Ventures and existing investor Ray Lane of GreatPoint Ventures.

This funding comes after Kinetica raised a $6 million round in September of last year, and brings the company's total fundraising to $63 million.

The San Francisco-based Kinetica was founded in 2009, when the United States Army Intelligence and Security Command, which were looking for a way to tracks terrorist and other national security threats in real time. Amit Vij and Nima Negahban created Kinetica from scratch as the solution to that problem.

"Our project was ingesting over 200 types of data feeds that were coming in at a very high velocity. This included drone data that was tracking every asset that moves in foreign nations, metadata coming from various mobile devices every few seconds, and social media, including Twitter and Facebook. The mission of our project was to kill or capture terrorists in real time, so it was finding that needle in the haystack, where you didn't necessarily know what query to ask, or you couldn't index your way out of it," Vij told me in an interview.

"We saw many of the pros and cons leading of the leading technologies that hear about today. Through that, we created a whole new database from the ground up using GPUs."

Starting out as a computation engine, and then a distributed database, Kinetica has now evolved into "a converged unified platform that acts as a data warehouse for enterprises, allowing them to run analytics, do their business intelligence, and to render pictures and videos on the fly."

"You see Apple and how easy it is to use in the commercial market; we're trying to provide a similar solution to the enterprise," Vij said.

"Organizations, many times, have to duct tape five to 10 different open source technologies that are loosely coupled, and take several months, if not years, to put into production. The big advancements that organizations get from us is the ability to process high velocity data feeds, being able to simultaneously run complex analytics on those feeds and to visualize the results in real time."

Kinetica now has about two dozen customers, and is growing quickly. It only began hiring its salesforce last year, and, prior to that, had just three or four customers. Those organizations using the platform now include GlaxoSmithKline, PG&E, US Postal Service, IronNet Cybersecurity, and one of the world’s largest retailers.

Use cases for Kinetica vary depending on the industry they are being used in. PG&E, for example, uses it to be more efficient in terms of replacing old utility poles and to handle analytics from smart meters.

The Postal Service, meanwhile, initially used Kinetica for route optimization, after giving its carriers mobile devices that emitted breadcrumbs once a minute, which was too much data for them to keep up with. Thanks to Kinetica, if a postal carrier calls in sick, the company is able to help redistribute their mail load on the fly, making it so that the mail would still delivered accurately and on time.

"We enabled the USPS to see their entire mobile workforce in real time and to determine the most optimal route from a distribution center to the delivery point, or what they call 'last mile.' We enriched that route path through other types of data feeds as well, so they could do predictive delivery of when the mail will be at a specific person's house within an hour's notice," said Vij.

For its retail customer, Kinetica is able to provide data to optimize supply chain management, allowing it to see how much inventory for a specific product it has in a specific distribution center.

"Where it takes them several hours, if not days, to compute that, we can do that as things are changing in just a few seconds," Vij told me.

The ROI for these companies comes in the form of cost savings, not only from optimization thanks to the data, but from the amount of power it takes to run the hardware, which is considerably less than other solutions.

"Because we're using the massive parallelization that GPUs provide to us, in turn, organizations can save an incredible amount of money. When we compare us to CPU-based technologies that are not parallelizations, we're usually one tenth of the cost and one twentieth the amount of power that's consumed. Organizations will usually get around 100x performance gain compared to any other memory databases that are on the market right now," said Vij.

Kinetica considers its greatest competition to be the traditional solutions in the space, such as Oracle and SAP HANA, which Vij says the company has now displaced.

"These are major commercial technologies that have failed in the government, and are failing commercial enterprises today. The fact is that these technologies have survived on data models that were created two decades ago. We created a database from scratch using GPUs, where each GPU has 4,000 to 5,000 cores per device. In a single service, you can put four GPUs, so you have 10,000 to 20,000 cores operating for you per server. We have racks of this at certain customers. Creating a database from scratch, using the advancements of hardware accelerator, these organization have not done that yet," he said.

"We're also running this on a distributed manner, on commodity hardware, so I don't need very expensive scale up machines that cost $1 million a rack. I'm running on pizza boxes that have GPUs in them. That's how these organizations get better performance at a fraction of the cost."

Kinetica will use the funding to expand its team, hiring additional engineering, sales, and marketing talent. It currently had between 75 and 80 employees, and it plans to be north of 100 by the end of the year. The funding will also go toward expansion, as the company plans to open new offices around the world, though Vij wouldn't specify which markets it is currently looking at.

In addition to the new funding, it was also announced that Gary Little and Paul Madera, partner at Meritech Capital Partners, will join Ray Lane, Amit Vij, and Nima Neghaban on Kinetica’s Board of Directors.

"They’re tremendous guys. They've had such great achievements, and they're very humble in nature as well. The same thing with Ray, who I talk to on a daily basis. All of these three guys, they're extremely hardworking, very hands on and operational and also very nice and humble as well," said Vij.

"Gary Little and Paul Madera worked at with each other on the board at Mulesoft, which had a great outcome with a  successful IPO. Paul gave Mark Zuckerberg was part of the initial round at Facebook. There's a number of different success stories that these folks have been a part of and they see us as the next evolution of technology."

Ultimately, Vij has a pretty big goal in mind with Kinetica: getting rid of his competitors, including companies like Oracle and SAP.

"We have our sights set on tacking those technologies and destroying them. That's the goal of the company and I hope to achieve that in the next four to five years," he said.

"Or leadership is comprised of industry experts in database solutions. Ray Lane used to be the right hand man for Larry Ellison, when Oracle was losing billions of dollars, and he turned the organization around and actually made it profitable and so successful. Gary Little invested in the Series B of TimesTen, which was procured by Oracle and was their solution for in memory database computing. Paul Madera, our other new board member, invested in very early in Matisse and gave them their first $15 million round with Meritech. Matisse has had a great outcome as well. We're surrounded by great leadership, and I feel with their mentorship we definitely are in a good position to complete our goal."