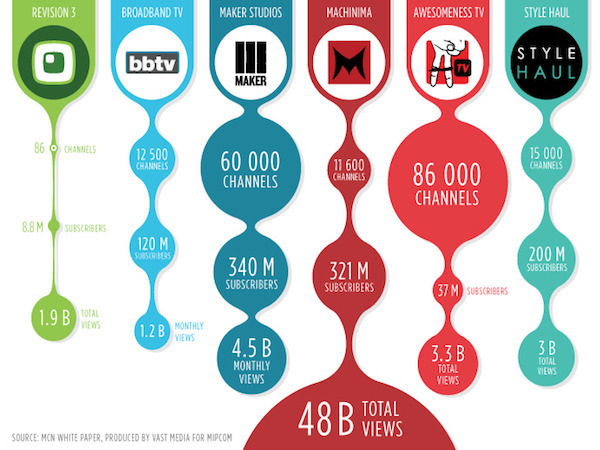 MCN sprouting almost every other day (In Asia specifically) with large content holders (studios) to small independent agencies buying into the trend. Most of these MCNs are predominantly attached at the hip to the popular video platform YouTube. Their platform provides quick go-to-market deployment with free bandwidth, storage and destination site in return for revenue-share. While this seems like a good partnership in the early days, it is a raw deal for the MCN in the long term.

Here are the large challenges that an MCN that is using YouTube encounters.

The Collective: Youtube owns the User & the Advertiser. The MCN plans the logistics, funds the talent to film the content and readies the asset for distribution. The MCN gets revenue share of some significance in the short term. The overall long term issue is that the MCN is insignificant without being part of the collective which YouTube represents. This effectively means that the MCN will live or die at the mercy of YouTube.  Case in point, see related story "Inside Disney's troubled $675 Mil. Maker Studio acquisition"

The Pandora’s Box: MCNs spend a lot of money in terms of time and marketing to capture the eyeballs of consumers on social networks, and from their direct-to-user marketing list to bring traffic YouTube for consumption of their content. However, once the user consumes the MCN’s content, the YouTube leverages and offers cross promotional content that most times has no relevance to the MCN’s owned content. This then means that the MCN drives traffic to YouTube and the platform can redirect the traffic and monetize on other publishers’ content or its own content at will. This diversion is not only loss of immediate revenue for the MCN but potentially loss of the user. The diversion also lessens the integrity of the MCN’s brand.

In order for an MCN to have a sustainable business. It needs to own the user and the traffic. In order to achieve this, the MCN needs to be in control of curation — Destination Site. And let YouTube be one of many ad networks that the MCN leverages for pre-rolls. However, this requires the MCN to rewire its strategy as well as its operations. Till this strategy revision is the done, every bit of coin the MCN mines will continue to be ambushed by YouTube.

Sandeep Casi is the founder and CEO of Videogram, a Social Video platform. He can be reached at scasi@videogram.com / Follow him on Twitter @sandeepcasi