The cannabis space set to see first annual drop since 2012 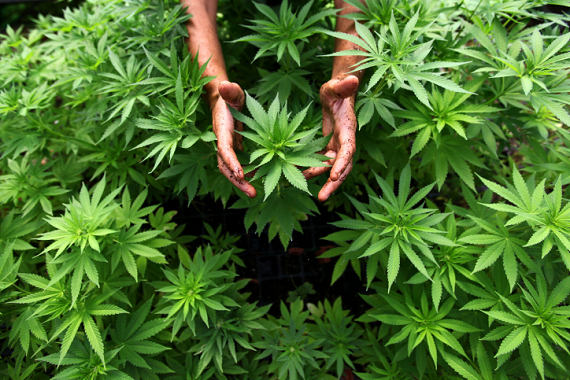 There's a lot of competition in the cannabis space right now, so much so that Mark Cuban doesn't even want to invest in it. Despite all legal restrictions, and regulations, it has really started to take off in the last couple of years.

Yet, despite the fact that cannabis may soon be legal in many more states than it is currently, investments have actually begun to slow, according to data out from CB Insights. That is on both a quarterly, and an annual level.

It should be noted that the cannabis space has not been growing on a consistent basis. As CB Insights put it, "Dollars invested have fluctuated significantly over the past seven quarters."

The most recent amount raised is the lowest amount raised since the third quarter of 2015, when only $7.8 million was invested, which was down over 80 percent from the previous quarter. So it's certainly not all that unusual for the cannabis space to see a drop in funding like it just did. 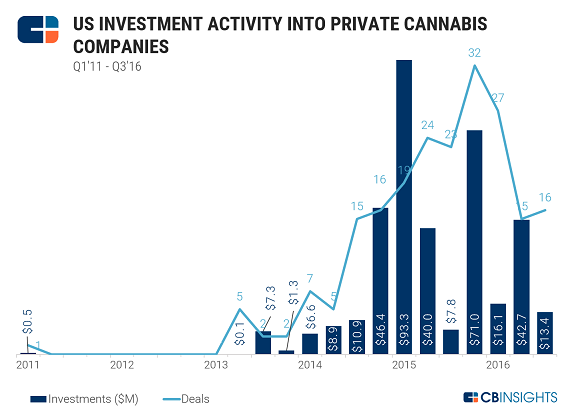 There were no disclosed deals in the space that were above $5 million during Q3, and there was only one deal that topped three million, which was the $3.8 million raised by CannaKorp. In fact, that one of only two deals to even top $1 million; the other was a $1.6 million round raised by dispensary marketing platform Baker.

On an annual basis, 2016 is set to be the first year that there will be a decline in either deals or dollars since back in 2012.

2015 actually saw a high in deal count and funding, with both rising more than 100 percent year-to-year. In 2016, CB Insights is projecting $94.9 million invested in 79 deals. That would represent a fall of 55 percent in dollars, and 19 percent in deals. 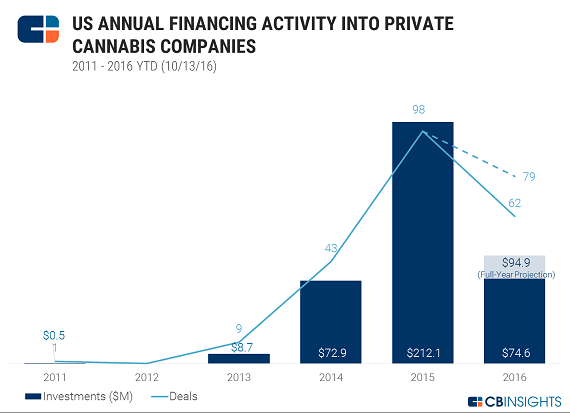 Both numbers will still pass 2014 to be the second highest year both dollars and deals yet.

CB Insights also looked at the states with the top number of deals over the past five years and, unsurprisingly, California, Colorado and Washington topped the list. Colorado and Washington are among just four states that have legalized cannabis for recreational use (remember when the Seahawks played the Broncos in the Super Bowl, aka  the "Weed Bowl"?), and California is always going to be the state where most of the deals happen.

There was $78 million invested in 65 deals in California since the beginning of 2011, while Colorado has seen $33 million in 60 deals. After that, the number of deals falls off, with Washington seeing oer 17, but the amount raised shoots back up, with $89 million.

Rounding out the list were New York, seeing 11 deals worth only $8 million, and Illinois, which had 10 deals and $55 million raised.

That gives Illinois the highest per deal average, with $5.5 million, followed closely by Washington, with $5.24 million per deal.