Mark Cuban at Splash: why I switched from Trump to Hillary 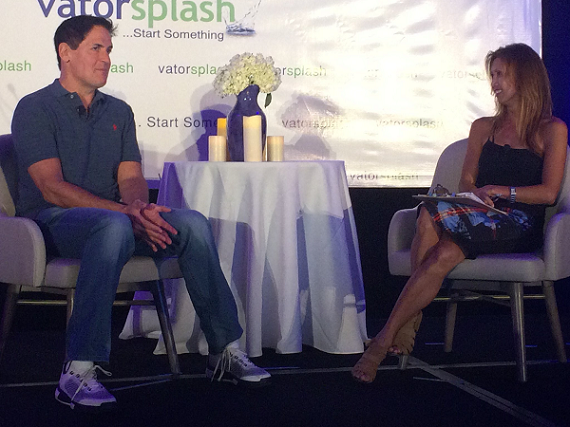 At our 6th annual Splash LA conference on Thursday, we were proud to have Mark Cuban, Shark Tank host and owner of the Dallas Mavericks, come join us to give us his thoughts on everything from entrepreneurship to the national debt.

Part of what makes Cuban such a great interview is not only the fact that he is so multifaceted, being a TV star, the owner of a major sports franchise and an investor, but that he's not afraid to speak his mind.

In no area has that been more clear than when it comes to politics. Cuban, who has openly talked about one day possibly running for President, has not been shy about letting his feelings about the current state of the election be known.

On stage, Vator CEO Bambi Francisco asked Cuban about his endorsement of Hillary Clinton, despite saying last year, “I would prefer to be a Republican. I want smaller government. I want smarter government.”

"The most expensive risk is political and social instability. If we're not safe, if there's riots in the streets, or there's social unrest, then businesses can't open, you can't get to work, and commerce can't happen. To me, Trump increases that risk exponentially," he said.

"Here he is, this close to being President of the United States, and he just can't shut up. He has to say some stupid shit all the time. Put aside what he said 11 or 12 years ago, that's bad enough, but just what he says now. There’s no there there when he talks. He has such a lack of self awareness, and such a lack of contextual awareness, that it's likely that he would say something offensive as President and offend North Korea or China or Russia. Invasions happen. There's military instability. There's a very fragile global peace and, to me, he's the greatest risk. What's more expensive, higher taxes and bigger government, or instability? Instability every time."

Cuban countered that, so far, he hasn't had a good track record with people on his team.

“Look at his track record. He’s been through three different campaign managers. Nobody, not one single person, has stood up, and said, ‘Boy, I worked for Trump forever and he was a great mentor to me. Or, ‘Boy, Donald Trump invested in my company, what a great mentor.’ Have you heard of one investment he’s made or from one entrepreneur? Not one. ‘Boy, Donald Trump made me a shitload of money.’ Words no one has ever said. So, when you say, ‘He’ll put good people around him,’ he hasn’t demonstrated the ability to do that.”

Cuban admitted that he started off liking Trump, calling him "probably the best thing to happen to politics in a long, long time."

"I don't care what his actual positions are," Cuban wrote in early 2015. "I don't care if he says the wrong thing. He says what's on his mind. He gives honest answers rather than prepared answers. This is more important than anything any candidate has done in years."

He switched when he spoke to Trump and realized he had no interest in learning.

“A big part of my supporting Donald at that time was that I thought Ted Cruz was smart and dangerous. Trump is just dangerous. When we got to the Republican convention, I started asking him, ‘Learn this stuff. You gotta learn this,’ and just no interest. I sent him links to books. Oh, it’s crazy. I talked to him when that whole FBI Apple hacking thing was out, from San Bernadino. I tried to send him stuff to explain it to him, just no interest in learning whatsoever,” said Cuban.

“So, when you ask me, ‘What happened? Why did I change?’ I told him, ‘At some point, you have to stand up and learn these policies. You have to learn. How that applies to advisers, if you’re sitting around and you’re trying to decide what Putin’s going to do next, and you’re trying to anticipate what’s going to happen with North Korea, and what should you do here, and what should you do there? You’re going to have five different advisers potentially giving you five different pieces of advice. You can’t make a choice, and make a qualified decision, if you have no idea what you’re talking about. That’s the problem.”