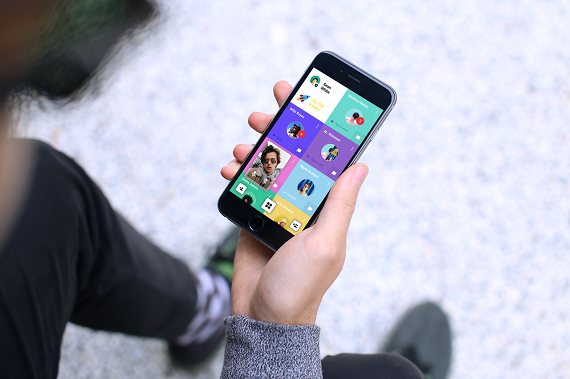 While texting has become the default method of communication for most people (think about when the last was that you called or e-mailed someone for something non-work related), it's not exactly the most dynamic platform.

"The problem is that texting is neither the most convenient nor most effective way to communicate with others," he said. "it’s hard to use with small keyboards, impossible to do while walking or in motion, requires you to use wo hands to type, contains no emotion, and makes showing actual personality nearly impossible."

That is what Tribe, which announced on Wednesday that it has raised a $3 million seed round of funding, is trying to solve.

Founded in 2015, the app is powered by natural language processing and voice analysis. Tribe recognizes spoken keywords, or "Magic Words," and overlays digital, clickable words on top of the user’s recorded video message. The recipient can then click the “Magic Word” for instant access to content around that word.

For example, if Drake is mentioned, his Vine, YouTube, and Spotify content are auto-populated onto the user’s screen, accessible with just one tap.

In addition, user context, such as weather and location, are displayed in every video. That means that when a user taps the location of the recipient, an estimated Uber price automatically is displayed in real time, with the option to order an Uber ride with one tap. Users can also find news or content about the recipient’s location.

There are now two types of Tribe groups on the platform: private groups, which are created for smaller, private conversations, and public groups, through which thousands of users around the world can discuss current topics or events, such as sports and entertainment in real time. These act as a large forum for video conversation.

"By creating a video messenger with an emphasis on groups, we have made it so people can chat with each other and always feel like they are with one another.  Video messaging with Tribe brings your conversation to life and is like always being able to Facetime but at your convenience," said Paglino.

"People love Facetime because it’s real, there’s emotion, and a real connection. Facetime is live and not messaging though. Tribe is the first video messaging app to do asynchronous videos. "

Tribe has connected over 500,000 users during its beta period. During this period, active users on Tribe opened the app more than 20 times per day and its active group chats sent over 200 videos per day.

The company also allows every user to connect directly to the Paglino, and, over the past six months, he has received and replied to more than 450,000 video messages from users across 120 countries.

While other messengers are text-based first, following up by adding audio and video in some instances, Tribe sets itself apart by being a video first product.

"We are bringing an entirely new experience with tribe. We feel as though Tribe brings a sense of magic as users experience their conversations coming to life," said Paglino. "Text has owned messaging for the past 15 years. We believe that video is the next big medium of communication, and we believe that the product that best captures the magic of video is going to be a massive opportunity. Billions of people around the world need to communicate, and we want to be the go to platform for the best quality messaging.

The core userbase for Tribe is made up of 65 percent teenagers, but another 15 percent of our userbase is over the age of 40.

"This shows the massive reach of Tribe, as it is easy to use and makes sense for kids, parents, entire families, CEOs reaching their employees, and tons of other use cases. Tribe is convenient for anyone looking to have more real conversations with those they care about talking to," said Paglino.

Tribe had had raised a pre-seed round of $500,000 last November from Ludlow Ventures, Partech Ventures and Kima Ventures. The new funding came from all of its existing investors and Sequoia Capital.

"The money will always go to our product no matter what.  Our number one focus is making sure we provide our users with the best product possible, and that will always stay the same," Paglino said.

"We are product people. We are passionate about what we’re building and our biggest mission is make our users happier every day. Our goal is to build a world-class messaging product, and we know we are on the long road toward making this a reliable lasting platform. Because of this, we are only spending money on people that want to help us build the future of messaging with Tribe."