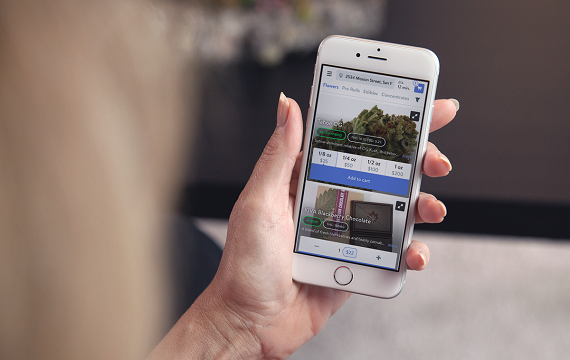 Note: The CannaVator accelerator, which includes a 10-week online and in-person program, is accepting applications for its Fall 2016 cohort. More details about the program and how to apply here.

Anyone paying attention knows that the cannabis industry is rapidly becoming a multi-billion dollar industry—in spite of existing limitations and regulations. To learn more about the companies fueling this growth, we’re doing a series of profiles on the biggest names in cannabis.

That includes Eaze, a leading medical cannabis technology company, which connects verified patients with compliant dispensaries to get their medical marijuana delivered on demand. It is currently in operation in almost 100 cities in California.

I spoke to Keith McCarty, founder and CEO of Eaze, about how on-demand and cannabis fit together, and how the company will be affected by oncoming regulations.

The origins of Eaze

Eaze started when McCarty, who also helped start Yammer, as well as Geni, saw two things happening at the same time: first, the proliferation of on-demand startups, and, second, a turning of the tide in favor of cannabis legalization.

McCarty was able to take those two major shifts, one technological and the other sociological, and combine them into a service that satisfied both.

"In 2012, we saw on-demand services like Lyft and Uber taking off, as well as sub-categories in other industries, like food and drink and home. It begged the question, 'What made the winners in each on demand category successful?' So, I created a model to look at every product and service to see what fit best. Cannabis kept popping up, so I wanted to learn more."

"That was also an important year because it was the first time the majority of Americans favored cannabis legalization. I knew that, similar to gay marriage, once there was that pendulum shift, we would see widespread acceptance start to move at an accelerated rate. The historic cannabis industry seemed to be in need of a technological make over. Everything seemed to fit. There was this huge opportunity to address a community in need of safe access to medical marijuana," he told me.

It wasn't just that McCarty saw a good business opportunity, though. He also saw a way to help better educate the public on the benefit of cannabis.

"There was also ethos behind it. To get in front of the media you have to believe its beneficial, and something that's good," he said.

As McCarty was doing research, he told me he would see stories about the benefits of cannabis, like one about Charlotte Figgi, a five-year-old girl, who was having grand mal seizures.

"Any parent would do anything to help their child, and traditional medicine wasn’t helping, so they ended up trying cannabis. They actually wound up creating a strain called Charlotte's Web, a CBD tincture, which helped keep her seizures at bay," he said.

"I would see how cannabis was helping with various illnesses, when nothing else would help, and I thought 'Why don't people understand? Why is there a stigma?' So I wanted to help educate the media, regulators and patients, and create a solution for safe professional access. That's something I can get behind."

Not everyone can use Eaze. Currently, the company only allows verified medical marijuana patients to access compliant cannabis dispensaries.

When a patient signs up, the company asks for information to verify that they are eligible to receive medicinal cannabis, such as a photo of their California drivers license, or ID card, and a recommendation letter from their doctor.

Once the company verifies that all documents are real, patients can start ordering products, with a minimum order size of $25. The order is routed to a local dispensary and driver, and users get a text message letting them know when their driver is arriving. The time from ordering to receiving their delivery is, on average, only 15 minutes.

One of the benefits of this type of platform for ordering medical cannabis products is the data that it produces. The more a patient uses Eaze, the more the company is able to learn about their habits, capturing consumption data around ordering, figuring out what a patient likes based on what products are rated the highest.

The company can also share that knowledge with the dispensaries it partners with.

"We've started to learn more about how our users prefer to consume cannabis. We want to understand their behavior, so right away we ask, 'How do you want to feel?' and 'What illness do you need to address?' as well as 'What's your price point?' since not everyone can afford top shelf cannabis," McCarty told me.

Once Eaze gets those three answers, it can start making recommendations. Over time, the more data it receives, the better they can point them in the right direction based on those behaviors.

"It's like Netflix. You watch a movie and rate it 5 stars, and another 1 star, they will compare it to aggregate data and use it to drive their recommendation engine. That kind of data is really powerful."

One thing that McCarty stresses about Eaze is that it strives to change the way cannabis is viewed, by being a professional service for getting products that patients need. In addition, all delivered products are high-quality and lab-tested, letting patients know that they are actually getting what they asked for.

"We partner with dispensaries, who have to test their products, and then we provide those test results to the patient, so they they know the TCH percentage, and the CDB percentage," McCarty explained. "We have curation standards for partnering with dispensaries. This way we know the product is safe, that it's been tested for mold and pesticides, and that patients are getting safe medicine. They know exactly what they’re getting."

Since Eaze is a tech service company, that means that at no point do any of its employees touch the plant. The drivers who deliver the cannabis aren’t employed or contracted by Eaze. The service is free for patients; instead of charging for deliveries, it makes money off of a SaaS model, where it gets paid for the tech services it provides to dispensaries, including its algorithms and analytics.

"The model is that we get paid by the dispensary for them connecting to the patient," McCarty said, though how that works varies depending on the dispensary.

"They're paying for technology services, including lead generation and the tech for the optimizations to ensure the driver can get there in the fastest and safest way, so it depends on the relationship we have with them."

Right now Eaze has hundreds of thousands of patients that it serves each month.

Dealing with regulations and the future of Eaze

Of course, being a technology company operating within the cannabis industry, Eaze’s work has not been easy due to the intense, and ever-changing, regulatory environment surrounding the product.

"To say we've had hurdles with regulations is an understatement. It's been extremely difficult to navigate," said McCarty. "There are different regulations on a city by city level, and all sorts of legal and regulatory policies to keep up with. It's changing so quickly that making sure you're on top of changes, and staying ahead those changes, has been challenging, especially in the beginning."

There are also challenges with the supply chain, as well as with ensuring that the cannabis product is safe, and with banking. Not to mention the stigma that's attached to working within the cannabis industry.

One way that Eaze has managed to stay ahead of all of that is by actually working with regulators to provide data to help them make decisions on how cannabis should be regulated. It has decided to be a "thought leader," as McCarty calls it, in order to not get left behind.

"Our perspective is that challenges are also an opportunity. We are providing value and helping shape regulation. That's something that Eaze wants to continue to do, while helping the industry to evolve," he said.

Right now, cannabis is in a state of flux. There could be some big changes coming very soon to cannabis, with multiple states voting on legalization in the coming election in November, which would have big ramifications on the industry, and companies like Eaze.

"2016 is a really important inflection year. In the past, four states and one district went recreational. We view those as pilots. When California goes recreational that will be a tipping point. The same way California looked at recreational markets to learn the best model framework, the federal government will look at California as a model for federal regulatory framework," McCarty said.

Even if cannabis regulations change in the next few months, Eaze should be in a good place, given that the company is built in a way where more volume helps it scale.

"Other businesses, which are not tech enabled, may struggle with additional demand," McCarty explained, and it wouldn't take much for the company to shift its model toward recreational users.

"The difference from our point of view would be to take out part of our sign up flow. We wouldn't require verification anymore. The tech and strategy wouldn't change."