After launching as a bot for Facebook Messenger earlier this month, weathercat picks up some cash

Poncho, the precious orange "weathercat" bot developed by betaworks, announced today that it has raised a $2 million seed round of funding led by Lerer Hippeau Ventures with participation from Greycroft Partners, Comcast Ventures LP, Venture51 Capital Partners, and RRE Ventures. 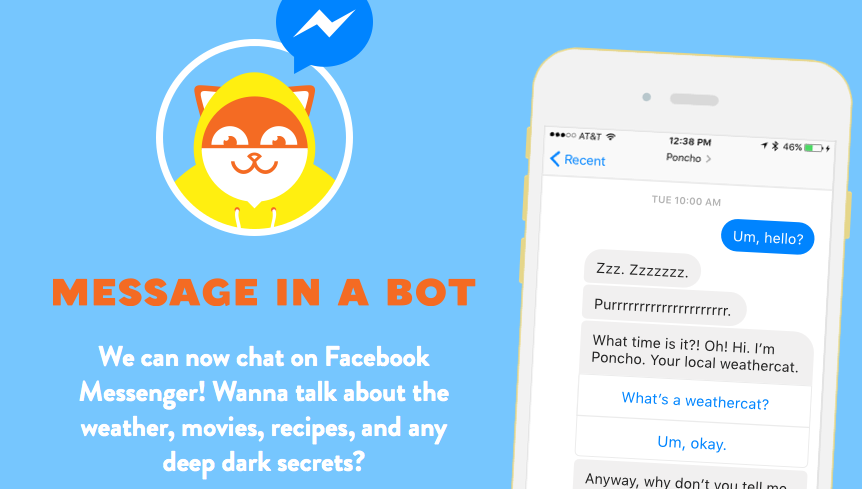 Also participating in the round is Poncho's creator betaworks, a New York City startup studio and seed stage venture capital firm that not only builds and invests in products, but has also acquired and relaunched them. In July 2012, for example, the firm purchased social news aggregator Digg for a reported $500,000. A year later, it purchased bookmarking tool and news reader Instapaper from the app’s original creator, Marco Arment.

Betaworks also makes seed investments (typically between $100K and $200K). Companies it has invested in include Everlane, GroupMe, Kickstarter, Medium, Path, Stocktwits, TweetDeck, Venmo, and (quite possibly the greatest Silicon Valley technology of all time) Yo.

I joke about Yo, but mentioning it gives an idea of what the team behind Poncho is all about: “thin content.”

Most companies in the business of content would balk at the idea that their content is “thin,” but for Poncho it’s a key differentiating factor. The company believes that this quick, light content, when provided on-demand and personalized to the needs of the consumer, can be just as valuable as what you might call “thick content.” There’s something to this. We don’t always need a ten-page report; sometimes we just need a cute orange cat to tell us the weather.

But you don’t have to take my word for it. Poncho has seen such a great deal of success that it has expanded its personalized weather forecasts across email, text message, an iOS app, and Slack.

Additionally, Poncho officially launched a chatbot for Facebook earlier this month as part of the social network’s new “bots on Messenger” program. The weathercat isn’t done yet either. Poncho plans to launch on Android and other messaging platforms in the future.

“It’s been incredible to receive this kind of support from a strong group of investors over such a short period of time,” said Sam Mandel, CEO of Poncho and partner at betaworks, in a prepared statement. “This speaks to the importance of what we’re doing: using data science and talented humans to create delightful and genuine light content experiences that drive continued engagement across text, email, notification and messaging platforms.”

But how does Poncho plan to make money? Over email, a spokesperson for the company told me it primarily comes down to brand integrations and provided an example of how they work with General Electric:

Poncho has a partnership with GE where GE sponsors content within the Poncho app, triggered by weather conditions (i.e., if weather was bad, the content would point out something good happening via GE weather products as a result). As for the future, there is a lot of opportunity in branded content for Poncho. Think of everything the weather effects – people order in more food when it's gross out, right?

Poncho says it will use its new funding to continue developing its chatbot, particularly using data science and artificial intelligence to make the cat’s conversation more casual and personalized.