BetterWorks, provider of an enterprise collaboration platform, announced today that it has raised a $20 million Series B funding round led by Emergence Capital with participation from Kleiner Perkins Caufield & Byers, 8VC, and previous investors.

In total, the company has raised $35.5 million in venture capital.

A collaboration tool specifically cast as "goal setting software" BetterWorks allows teams to set milestones for individuals, check in on progress, and provide feedback. The tool has a strong visual element, as you can actually see how individual goals relate to each other as well as how they align to broader company goals. And, of course, it wouldn't be enterprise software without dashboards that demonstrate data and engagement stats by team, department, and company. 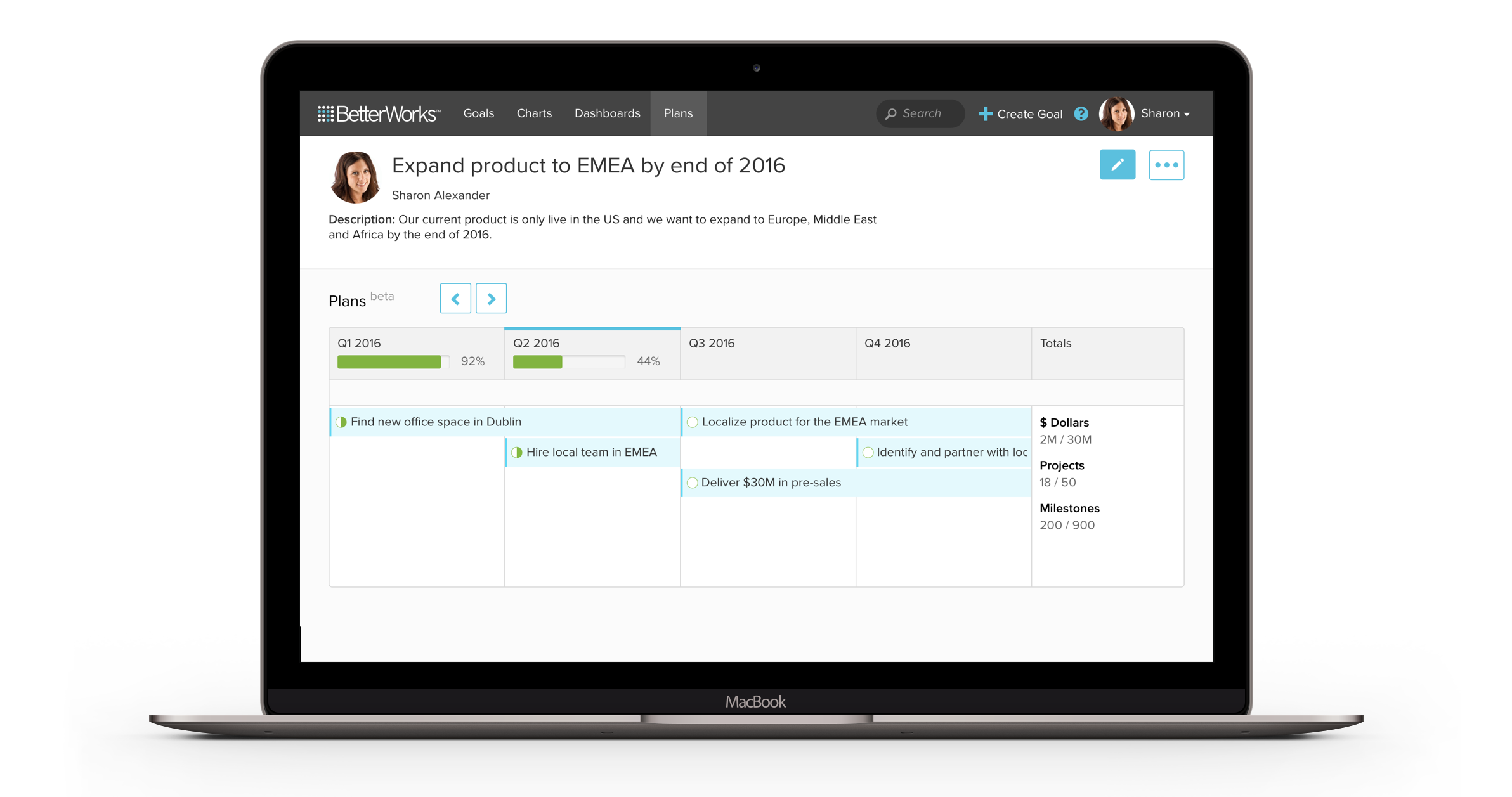 For those enterprises that already have systems in place—either for CRM, ERP, or some other collaborative purpose—BetterWorks has made sure to offer integrations. Supported tools today include JIRA, Okta, Salesforce, Slack, SuccessFactors, and Workday. While BetterWorks does integrate with outside vendors, the company’s ultimate goal is to be a system that stands on its own.

“Our vision for BetterWorks is to be the standalone Business Operating System for the enterprise, which is a new category altogether,” explained BetterWorks CEO Kris Duggan to me over email. “We just added performance development and strategic planning features on top of our goal setting technology so businesses can connect people and processes to achieve operational excellence. With the addition of these products, we are truly sufficient as a standalone platform.”

Given the lengthy list of reputable, paying customers, I had to ask the company about their financials. Over email, BetterWorks CEO Kris Duggan told me they’re “on the path to profitability.” The idea behind the new round, with Emergence Capital playing a supportive role, is to help guide the company “towards profitability quickly and swiftly.”

As just one example of a real-world implementation, AOL has deployed BetterWorks to its nearly 6,000 worldwide employees.

Zandhuis’ mention of “agile performance development” references a methodology called “agile software development,” which differs from traditional methods in that it allows teams to be more flexible in the way they complete various tasks. While agile originated in the late 1980s specifically to change development processes, the methodology has increasingly been adopted across non-developer business practices, as Zandhuis’ statement exemplifies.

If BetterWorks could leverage that story as part of its overall message by saying that its software makes teams of all kinds more agile, flexible, and therefore more successful, the company could have a bright future.