Vijay Pande: The best healthtech has a software center

Vijay Pande (general partner, Andreessen Horowitz) took the stage at Vator Splash Health 2016 yesterday to share a talk called “When software eats bio,” in which he shared a confluence of factors contributing to the renaissance not just in technology but in healthcare technology. 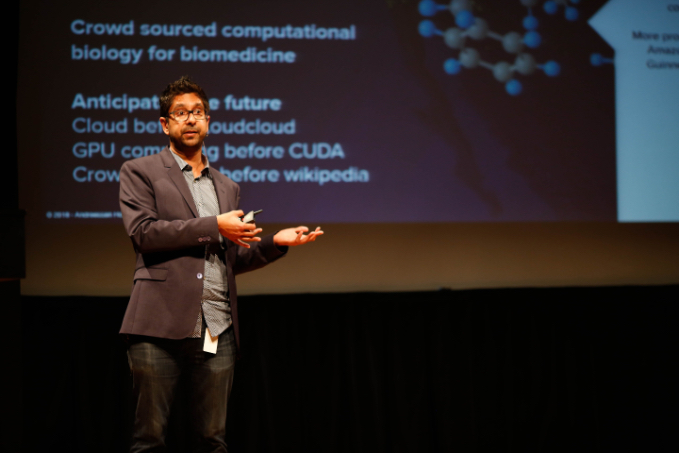 It all comes back to Moore’s Law, the observation that the processing power of our computers doubles approximately every two years. This core observation gives way to a family of laws, such as the fact that, as time goes on, the cost of storage, mobile, storage, sensors, cameras, and most other technology goes to zero.

While most of us in the technology industry have at least heard of this tenet, Pande’s key point here was that these exponential trends tend to catch us off guard. Something that might have seen extraordinary a few years ago seems commonplace today. In China, you spend just $20 on mobile phones with computing power equivalent to the original iPhone, which cost at least $400 just six years ago.

Looking at Moore’s Law, it’s tempting to assume that healthtech would just get easier and cheaper as time goes on, just as happened to various other technologies. But, as Silicon Valley investor Peter Thiel explains in his book Zero to One: Notes on Startups, or How to Build the Future, there are many other factors at play. Organisms, unlike code, are difficult to control. Health is heavily regulated. And it has always been expensive.

Compounding all this is Eroom’s Law, which holds that drug discovery is actually becoming slower and more expensive over time.

“But the new generation of healthcare startups really look like tech startups,” said Pande. “We’re looking for companies that live in the space of Eroom’s Law but can take advantage of Moore’s Law.”

He offered a few examples.

Traditional therapeutics are slow, expensive to develop, and (due to the potential for toxic side effects) heavily regulated by the Food and Drug Administration (FDA). As a good example of a digital therapeutics company working against these challenges, Pande cited Omada Health, which has raised $77.5 million from several investors (including Pande's Andreessen Horowitz).

Omada is designed specifically to take on chronic diseases like diabetes that are often preventable through behavioral changes. The company intrigued Pande because it takes “existing therapies that work and are expensive but only available to a few people” and makes it both more widely available and more efficient. The investor added that it’s only possible through the huge built-in infrastructure we’ve created through our mobile devices.

Traditional biology, according to Pande, requires large amounts of capital, delivers poor reproducibility, and doesn’t scale. He said labs today look almost “pre-industrial” due to the manual labor aspect. With cloud biology, on the other hand, “robots drive everything,” he continued. “Reproducibility looks like rerunning the program.”

He cited Counsyl, a DNA screening provider for expecting parents and individuals with history of cancer in their family, as an example of a new biology company leveraging advanced hardware and software to upgrade traditional biology.

Finally, Pande talked about how traditional medicine has actually given way to a tsunami of data and flood of new drugs for many diseases. Even with cancer, we have many treatments but the question is “what’s the right drug for the right patient at the right time?” The right therapy changes as the cancer changes, so determining what treatment is hard to decide for even the best oncologist.