The company is able to measure 56 unique emotion categories like love, dislike, and beautiful 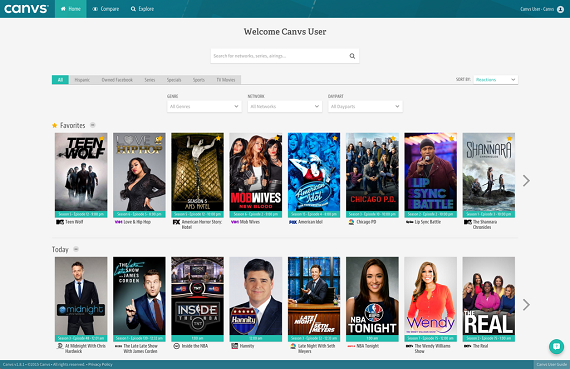 In the last 10 years or so, social media has changed the way that advertisers and brands interact with regular people. Instead of having to ask us how we feel, we are telling them, in real time, what we think about... well, everything. It's a treasure trove of information.

Yet, the technology for actually fully understanding how people are expressing themselves is not yet there. They know if we like something, or if we don;t, but they miss all the shades of grey.

Enter, Canvs, a technology platform created to measure and interpret emotions. On Thursday it announced that it raised a $5.6 million series A financing round led by KEC Ventures. Rubicon Venture Capital, Gary Vaynerchuck and BraVe Ventures, Social Starts, and Milestone Partners also participated.

The company had previously raised a $1.5 million round in May of 2014, when it was known as Mashwork.

Canvs is an analytics platform that mines social reactions happening around television, going deeper than any technology before it, Jared Feldman, co-founder and CEO of Canvs, told me in an interview.

"The problems is that on Sunday nights HBO runs its shows, and on Monday morning they say, 'How did I do?' That's quantitative, the how many people discussed a show. That's a simple problem. 'How did they feel about the show?' That's widlly difficult," he said.

There had, until now, been no accurate way to quickly understand how people feel. Many have tried to gauge what they call "sentiment," though that has rarely worked.

"Historically, sentiment tools essentially make a tradeoff. Either you get information quickly, but it's inaccurate, and it gets put into three buckets: postive, negative or neutral. But thaty's not really how people talk," said Feldman. "On the their end, you have supervised poll, which require a great deal of input. They are perceived as more accurate, but it doesn’t scale."

In all $40 billion was spent globally on traditional market research last year, he told me, with focus groups, which have been around since Andrew Jackson was President and calling people on landlines.

Launched a year and a half ago, Canvs finally fixes these problems by expanding those three traditional buckets into a total of 56 different emotions.

"Excited, shocked, racist, bored, these are ways people express how they feel. There's no sentiment involved, and we're not assigning tone. Whether they say they love it or it's crazy, that's not a good thing or a bad thing. Instead of making a decision good or bad, we tell our customers how many end users felt this way," Feldman explained.

"The reason why this so hard, is that nobody speaks properly. It's complicated for a computer to understand emotion. There are 30,000 ways to say you love something."

So Canvs went out and built the world's largest emotional database, filled with phrases and synonyms so that four million emotional responses can now be recognized, even though there's only 96 ways a human can feel something.

There are a lot of nuances to language, including things like emojis and memes, but sarcasm, slang and irony that a computer has to be able to pick up, Feldman said.

"We have an amazing wide net, and we're millennial driven," he told me. "We are the first voice of the millennial, and we actually understand how they talk. If a teen is talking about Teen Wolf, now you can understand it."

Of course, understanding those emotions is only the first part. Then comes what you can do with that information.

The company currently has 30 customers, with a focus on first run television, working with Sony Pictures, SMG, NBCU, Viacom and more, who are latching onto it as the value of traditional rating systems erode.

"This is a new way to tell the ecosystem what's a success and what's not. It's the first time since the advent of social that they can use it learn about their audience," Feldman said. "They can learn what percentage of last night's audience thought a show was funny or scary. We are seeing adoption across the value chain."

For example. Sony is using Canvs for one of its shows, called The Blacklist, and can see what moments in the show are resonating, where there is storyline fatigue and even which actor to cast or to keep on the show. That last one is even getting talent agencies on board, including CAA and UTA, who sell their shows, and their clients, to the networks.

"This is important. No executive ever canceled or renewed based on social alone, but how people feel can determine if they are more likely to watch a show," said Feldman.

Most importantly, though, advertisers are using Canvs to know when there will be yes on the screen, when people are more likely to be engaged and, therefore, will be more likely to remember the ad and go and buy something. That can be measured in real time.

And it is that last group that Canvs is most eager to go after, using this funding will go toward growing out its product and user interface.

"We want to get to be the de fact standard for emotional content integrations in advertising," Feldman said. "We are going to be the the authority in emotions, and we are going to prove that emotions are important. We are working with leading researchers to show that emotions are important from a psychology standpoint and from a business outcome standpoint. Emotionally engaged audiences have greater loyalty to a show, and can recall the ads. They have willingness to purchase products."

It will also go toward building out it product and engineering teams, as well as sales and marketing, which it has not had up to this point.

"At the end of the day we are an insights company, and now we want to take advantage of our momentum. Largely this story is not about us, but the modernization of a market industry that hasn't changed in a long time. This is the first time they are ever really considering getting emotional insights about their audiences."