17M smartwatches shipped last year, and over half were Apple

The Apple Watch dominated all competitors, with Android getting less than 10% of shipments 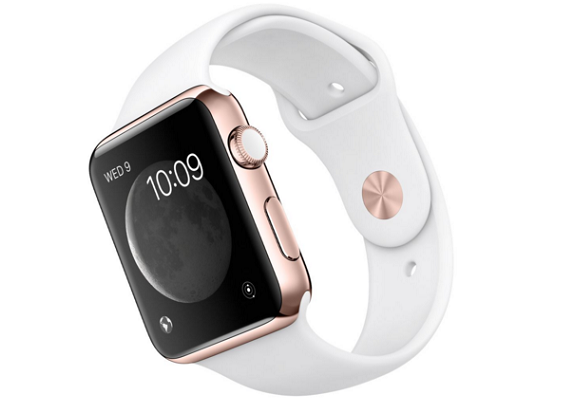 If you went and bought a smartwatch in the last year, there's a really good chance it was an Apple Watch.

In all there were 17.1 million smartwatches shipped globally in 2015, according to new data out from Juniper Research on Tuesday. More than 50 percent of those shipments were Apple Watches, or roughly 8.9 million in all. That's even more impressive when you realize that the device was only released at the end of April.

Android Wear shipments, on the other hand, made up less than 10 percent of sales for the year.

The dominance of Apple surely has something to do with the brand, as people tend to flock to Apple products, but more importantly, according to Juniper, are its capabilities. While Apple has 10,000 apps available for its platform, while Android Wear has less than half with, with 4,000 apps.

That lack of apps will also hurt sales of the Samsung Gear 2, which was released in September of last year.

The bulk of sales right now seem to be coming from North America and China, with West Europe not far behind. Other regions, including Africa & the Middle East, Latin America, and Eastern Europe, have so far not really adopted the technology. 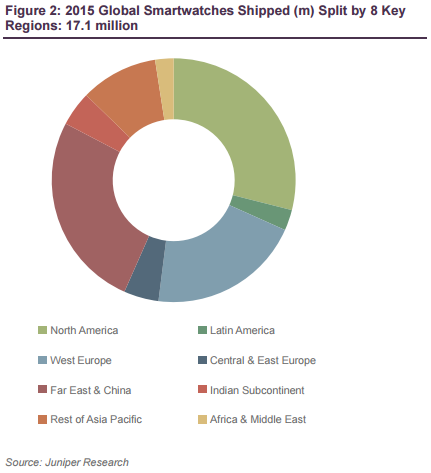 If there is one thing that could potential hurt the Apple Watch it's the price. According to Juniper, more than half of people surveyed said that they don't want to spent more than $99 for a wearable, and the price tops out at $175.3 that people would be willing to pay.

Another major problem, and this just doesn't only apply to Apple, is general antipathy toward the smartwatch in general. Nearly 30% of those surveyed by Juniper said they are not looking to buy a wearable in the next six months, simply because they didn’t think they would use the device. And obviously people are not going to pay super high prices for something they aren't sure they need in the first place.

Despite those problems, these are encouraging signs for the wearables space, which was expected to break out in 2015.

A report early last year forecasted that the number of wearables shipped would more than double in 2015 to 45.7 million units, up from 19.6 million in 2014. By 2019, total shipment volumes are forecast to reach 126.1 million units. That means it will have a five-year compound annual growth rate of 45.1%.

Those predictions turned out to be correct. In all, 39.5 million adults in the United States used at least one wearable, including a smartwatch or a fitness tracker, in 2015, according to eMarketer. That was an increase of 57.7% over the 25. 1 million who used them in 2014.