Freelancing in the Netherlands? There’s a new way for you to swap cash for office space, on the fly.

Deskbookers, an online platform for booking work and meeting spaces, today announced that it has secured $1.6 million in seed funding from Point Nine Capital and a couple angel investors with experience in the booking and travel space--Arthur Kosten (former CMO of Booking.com) and Marcel Beemsterboer (co-founder and former CEO of Emesa.nl). 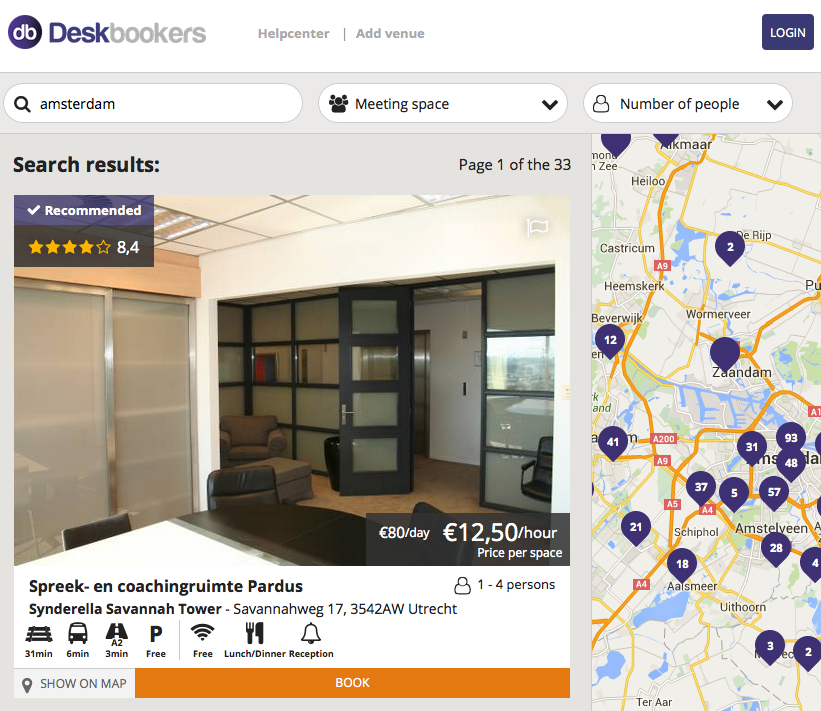 Point Nine Capital, which led the round, is a Berlin-based early-stage venture capital firm primarily focused on SaaS and online marketplaces. The firm, which invests both in Europe and the U.S., now has 55 companies in its portfolio and has raised a total of $100M for its three funds. One of its notable investments was an early bet on Zendesk, the customer service and support system today trading on the New York Stock Exchange (under ZEN) for around $25.50 per share.

On Deskbookers, Point Nine Capital’s newest investment, you can search among four general categories of spaces: meeting spaces (for larger groups), meeting rooms (for smaller groups), training rooms, and workspaces. You can filter by how many people you need to accommodate, pricing, as well as other parameters, such as whether there's free parking or WiFi available.

Though it’s far from the first company to target freelancers looking to rent out space for meetings or other work, Deskbookers claims be Europe’s largest.

One of the big names stateside is New York-based WeWork, which has raised over $1 billion in funding. Even before the company's $434 million round this past summer, the company had been valued at around $5 billion, joining fellow sharing economy companies Uber and Airbnb in the unicorn club. Today, WeWork operates in 13 cities in the U.S., three in Israel, and one each in the U.K. (London) and the Netherlands (Amsterdam).

"I consider WeWork a brand or label in our industry," said Deskbookers founder Jeroen Arts in an email. "It is a subset of (fantastic) venues that clearly sets the bar for providing a great work environment. However, Deskbookers operates on the meta level and includes WeWork-kinds of venues in a broader offering. We also provide a great end-to-end experience for customers and venue hosts."

Deskbookers, which takes a 15 percent cut of every booking processed on the site, says they're currently processing millions of Euros in annual revenue. They wouldn't get any more specific than that, but they say they do about 7,000 bookings per month, with nearly 100,000 bookings processed to date.

The seed funding will be used to “double down on expansion and growth,” says Deskbookers founder Jeroen Arts. That means launching in five new countries (including the U.K.), going mobile, and adding new features. The 23-person, Amsterdam-based company will also be building out its product and marketing teams.