Fiverr goes beyond $5 with $60M Series D round

Maybe freelancers should be able to charge more than $5 for their work.

Fiverr, the marketplace famous for freelancers doing work for just $5 a pop, today announced that it has raised $60 million in late-stage funding led by Square Peg Capital, bringing the company’s total funding to $110 million. Other contributors include existing investors Bessemer Venture Partners, Accel, and Qumra Capital.

For those unfamiliar with Fiverr, it’s a site where you can hire freelancers (often from creative or marketing backgrounds) offering their services for just $5. For example, for $5, user Laserlife will write a compelling bio, elevator pitch or intro. Or you can hire top rated seller Wingle, who will design a stunning and beautiful business card. There are gigs in online marketing, translation, music mixing and mastering, and more. 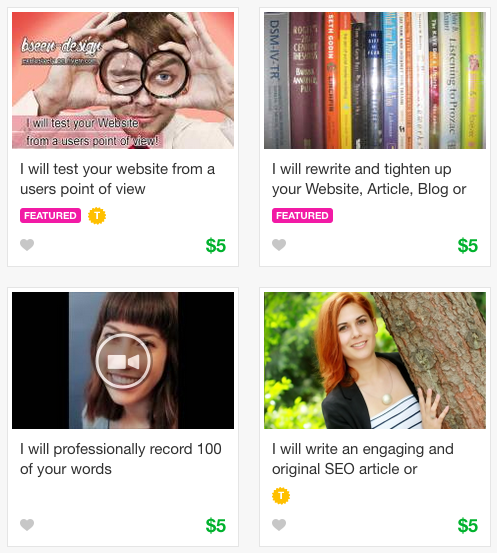 In a bold decision that moves the company away from its namesake, Fiverr also announced today that freelancers will no longer be required to price gigs at $5, though the company isn't opening the gates completely for sellers to set their own prices. Rather, Fiverr will be rolling out “Gig Packages” that allow sellers to bundle services into a package for higher prices.

Obviously there are only so many services that people are willing to do for just $5. By going beyond that limit, Fiverr is expanding the range of services sellers can offer, while also boosting the company's own profit prospects.

Fiverr now does about one million digital transactions monthly. Since the company takes a 20 percent cut ($1) from every transaction, we can safely assume the company is generating about $12 million annually. (I’ve reached out to the company to confirm that my math works out and will update if I hear back.) Clearly they wouldn’t see that number growing anytime soon unless they signed up even more users or allowed sellers to charge more.

User growth will always be important, surely, but today they’re doubling down on that second option. Let sellers charge more and everybody wins.

Founded in 2010 and headquartered in Tel Aviv, Fiverr says today’s new late-stage funding round will be used to reach even more freelancers, who the company says still depend on word-of-mouth to find work.