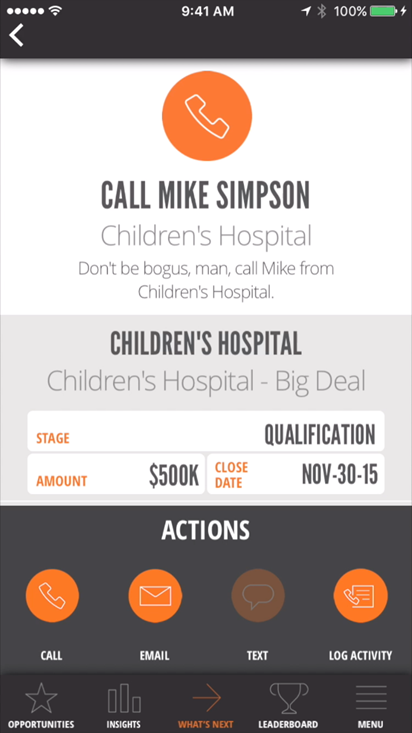 Spiro, a personal sales assistant for iOS, announced today at the Sales Stack Conference in San Francisco that it has secured $1.5 million in seed funding from several investors, including:

The app, which is free and available for download on Apple’s App Store, integrates with a salesperson’s Salesforce account, email account, and calendar, which it then uses to source intelligent, actionable recommendations. In short, the application aims to solve one of the most basic pain points for the busy salesperson: figuring out, in this precise moment, the best prospect to call, email or meet with to advance opportunities.

Additionally, Spiro removes the need for manual data entry around calls and emails, as it automatically updates Salesforce when these actions are taken.

Great features but nothing especially novel… so how does Spiro differentiate itself? A hint is in the press release for today’s announcement, which brazenly hails Spiro as the the first personal sales assistant to help salespeople “make more money.” Really?

The jokes don’t stop there. Spiro comes pre-loaded with several "assistant personas," including Surfer Dude, Coach, Gossip Girl, Jewish Mother, and Fabio, each designed to motivate you in a different way. For example, Surfer Dude would say, "Mike would be totally stoked if you called him" versus the Jewish Mother: "Go ahead, don't call Mike. See if I care.”

Whether it’s Spiro’s underlying algorithms or the silly personalities, something about the app appears to be working. Salespeople using the app sold 11 percent more deals per month and increased their average deal size by 18 percent, according to a beta test of the app run by Spiro. Companies whose salespeople have tried out Spiro include Paychex, Yelp, and LinkedIn.

If it’s true that Spiro makes salespeople this much more successful, then it probably won’t have trouble driving more and more people to download and use its app. But if the app is free, how will the company make money?

"Looking way ahead, Spiro may introduce a paid team edition if our users’ companies are looking to replicate the success individual users are having with the app on a larger scale," said Adam Honig, co-founder and CEO of Spiro Technologies, Inc., in a statement to VatorNews. "We’ll have more to announce about other editions in the near future."

Though today the app is only available for iPhones and iPads, the company says it’s working on Android and desktop versions as well. And integration for additional CRM systems beyond Salesforce is also in the works.

Anyone curious to demo the app can visit Spiro at the Sales Stack Conference in San Francisco, booth #39 in the Enablement section.