The round was led by Tenaya Capital, along with Sequoia Capital and Lightspeed Venture Partners 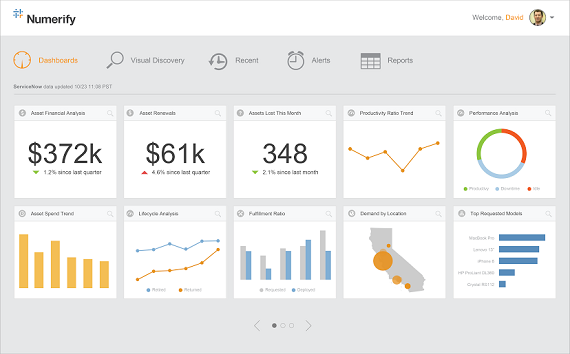 There's a ton of activity currently happening in the business analytics space. While most people typically think of Splunk, but there's a larger net of companies that are coming into the spotlight with cloud-based analytics tailored specifically to the business of IT.

One of those companies is Numerify, which announced on Thursday it has closed a $37.5 million Series C funding round, which was led by Tenaya Capital. The company also received support from existing investors Sequoia Capital and Lightspeed Venture Partners and new financing from Silicon Valley Bank and Four Rivers Group.

The new round brings Numerify’s total amount of funding raised to more than $60 million.

Founded in October 2012 and is headquartered in Cupertino, California, Numerify is a provider of IT business analytics applications to leading organizations that have embraced cloud based IT services, assets, projects and finance systems.

"IT is a critical component of modern organizations and, similar to other areas of business, IT has adopted multiple cloud operational applications, such as ServiceNow, to automate and streamline their business processes and deliver greater efficiency. While IT has built and deployed BI solutions for the other departments, IT organizations have lagged in terms of deploying their own analytics to support service improvement," Gaurav Rewari, CEO and Founder of Numerify, told me in an interview.

"Numerify’s pre-built cloud-based analytic applications span the key functional areas of the IT organization, including services, assets, project management and finances, to provide a 360-degree view of IT business performance. This gives IT leaders the ongoing insights required to keep all functional areas of IT in optimal shape and drive tangible process improvements across IT organizations."

Over the past year, Numerify has seen huge market adoption, with triple digit year-on-year bookings growth, allowing the company to expand its customer base seven-fold. Customers include brands such as Netflix, Intuit, Weill Cornell Medical and Aruba Networks, among others.

There are a number of big players in this space, including Apptio, which does IT financial analytics, and which is rumored to be going public soon. There is also Sumo Logic, which raised $80 million for DevOps in June, and there are security vendors like Rapid7, which announced Tuesday the acquisition of Logentries to add other IT analytics capabilities.

Numerify sees its biggest competitors to be legacy vendors, who traditionally offer a build-it-yourself approach. The key differentiator for Numerify is that it offer pre-built analytics applications in the cloud.

"We are seeing customer adoption across industries, from healthcare, financial services and retailers to high-tech companies," Rewari said. "Customers come to us because they want pre-built analytics applications that provide them with a granular view of their IT services, assets, project management and finances to better meet the overall business objectives."

Over the last year, the company has doubled its U.S. employee headcount, including growing its overall strength with over a hundred people across its Engineering, Sales and Marketing teams.

The funding will be used to expand Numerify’s sales and marketing capabilities and will support R&D efforts for new areas of IT business operations. It will also support the company;s continued growth in North America and more in the United Kingdom and Western Europe "as we continue to build our rapidly growing customer base and continue our investment in engineering hiring in order to keep our product advantage in the marketplace," Rewari said.

"Our team culture at Numerify is ambitious, and we share a common vision: to build the de facto applications that IT uses to measure and manage their business success.