Jeremy Liew: Snapchat's vision is to be the anti-Facebook 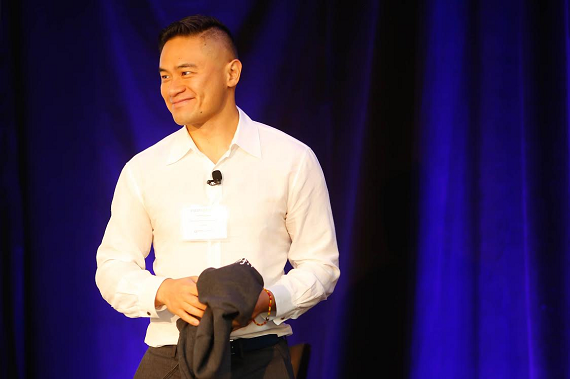 Liew is known for his investments in some of the top companies in the LA tech scene, like Whisper and Snapchat, where he put in $485,000 when the company was only 10 months old and only had a few tens of thousands of users.

"Is there a minimum number of of users [companies] should before they even talk to you, before they can get a seed round?" Francisco asked.

"I think the environment has changed a lot, When we invested in Snapchat we bought 10% of the company for half a million dollars, and they had a few tens of thousands of users, so seed pricing has, I think, moved upwards since then and the amount of traction you see from some seed companies has changed as well," he said.

"At Lightspeed we've got $3 billion under management, and our current fund is around $1 billion, so for us we have the ability to flex upwards or downwards depending on financing environments. So for us its less important, what we're most focused on,especially on the consumer side, is some evidence that users are really responding positively."

That means a DAU to MAU ratio of at least 25 percent to 30 percent, and "apps that can be homescreen apps," or ones used multiple times a day and multiple days a week.

"Once you get into the tens of thousands of daily active users, then you have a reasonably significant sample set, and if you see the growth, if you see that sort of engagement, retention you probably aren't going to see yet, but engagement is a pretty good predictor of retention."

So what actually attracted Liew to Snapchat: was it the traction it was getting, or was it the vision, which Francisco described as "disappearing images."

To Liew, disappearing photos was the product, but not the vision, which he said was something "much more compelling."

"One of the things that Evan talked about, even back then, and this I think is common knowledge now, is the performance anxiety of being on Facebook. How it's sort of a highlight reel of your life. If something doesn't make you look the way you want to look, then you don't put it on Facebook. He was talking about that concept years ago, it was a very interesting conversation," Liew said.

"And he talked about how if you want to bring relationships with people, you have to see 360 degrees of them. It can't be just their top 10 percent moments. It can't be just when they're feeling happ or proud or excited. It can't be their highlight reel because real relationships get built around seeing people not just when they're happy or excited but also when they're silly or goofy or sad or nervous, and that whole set of emotions is how people build relationships. And he said that wasn't happening on Facebook. And the reason it wasn't happening was because it was the journal of record for your real life, so everything you put up there stayed there."

By allowing people to express themselves without the fear of having what they said and did stay around forever was meant to be "driving people to be much more complete in their communications with their friends," by allowing them to see every side of the other person and to create stronger relationships as a result.

With that in mind, Snapchat's decision to turn down so much money to become a part of Facebook makes a lot more sense.