Prediction: Explosion of new VC funds will fuel growth in assets under management to the trillions

I was recently asked to give a presentation about the state of venture capital to a group of mainly public-market investors. Given the frothy environment, the first thought would be to talk about Uber and the hyper-inflated valuations at the pre-IPO stages.

I’ve seen the market get ahead of itself too many times. As we are in a six-year bull market, supported by near-zero interest rates, this time is one of those times.

Yet what is more interesting than the forthcoming correction is the proliferation of the new venture funds, and the broadening out of the investor base in private companies through these funds.

While there’s been a lot written about the emergence of micro VCs - sub-$50 million funds, mainly because it's cheaper to start companies enabling and often requiring funds to be of smaller size, I will take it one step further: It’s just the beginning.

In other words, I see a lot of similarities between the public markets circa 1980's and the private markets (venture capital) today.

Today, more than half of US households own public stocks either outright or through a mutual fund. That’s up from 4.5% in 1950.  While a lot of this expansion of ownership happened in the “Wonder years” decade in the 60’s, there was little growth in the 70’s. In fact, stock fund assets plunged 44% during ’73-’74. 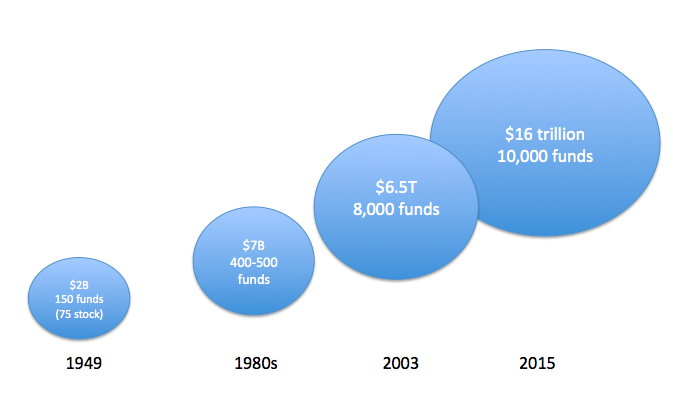 The expanding investor base into private companies

In like vein, today, we are in the sixth year of a bull market. And, increasingly the number of angel investors institutionalizing their activity is rising, thanks to the JOBS Act, which has essentially made it easier for online platforms to aggregate investors and showcase private deals to them.

In 2014, there were 1200 venture funds, with $156 billion under management, according to NVCA. These funds don’t include the 100 or so establishing themselves on crowdfunding sites, like AngelList and FundersClub. Given the newness of these funds, and the opaqueness of the industry, these funds aren’t exactly being counted. At the same time, while I call them funds, they’re actually called other names: Syndicates and Partnerships. Yet they’re essentially funds in that they aggregate investors and diversify them across multiple assets and are managed by a manager or managers. Other equity crowdfunding sites, such as CircleUp or Crowdcube in the UK, are also helping to market these private equities to a growing base of investors. Crowdcube has 200,000 investors, though many are not accredited.

Due to the regulatory challenges of promoting individual companies on crowdfunding sites, these funds have emerged to make it easier and faster for equity to be raised. They also make it less risky for individuals who don’t have time to do their own due diligence to put their trust in a steward of a fund.

The growth of the mutual industry did the same for public market investors. Those funds lowered the barrier to entry into the stock market, and offered diversification via a steward.

What’s more, technology advancements have made it easier for private venture funds to be formed. No longer do companies need $5 million to get off the ground, but rather $50k to $100k. The lower the amount to invest, the lower funds need to be. The lower the funds can be, the need for new investors since traditional limited partners in venture funds are pension funds and ultra wealthy family offices that are looking to put millions of dollars to work vs thousands of dollars.

Staying private longer drives investors to the private side

It’s not hard to draw the parallels between the public and private markets (venture capital), especially when more companies are staying private longer, keeping investors salivating for hyper-growth assets that are not in their reach, unless they venture into pre-IPO territory, which they are doing. Hedge fund Coatue Management launched a $300 million tech fund in 2013. And according to CB Insights, nontraditional venture investors, such as Coatue, Tiger Global, Valiant Capital, Fidelity, and T. Rowe Price have invested $2.5 billion in 2013, up 26% from the prior year.

To be sure, the public markets are far more liquid than private markets. Moreover, very few bets have exits (in other words – an opportunity for investors to get a return). NVCA data shows that in a 10-year period, only 14% of companies that were venture backed went public. Only 33% were acquired, and 18% failed. With that rule-of-thumb, it’s hard to imagine thousands of funds having a decent return. In fact, they won't.

Many will become "Zombie VCs", much like we saw after the Internet bubble crashed in 2000-2001. Many will fail. And the death rate may even be higher than mutual funds where a study showed that 7% of funds died each year between 2001 and 2012.

Still, the average return over 10 years ending 2013, as measured by the NVCA, was 9.7%. That's on par, or by some estimates five times better than the return by mutual funds.

A recent article in the Economist, reported that “on average, active funds underperformed by around 1.6 percentage points a year.” Some studies have shown that while the stock market provided an annual return of 13% over a 20-yr period, the average equity fund returned 10%, and the average investor earned 2%, mainly due to high fees and poor timing.

With returns like this, it’s not a stretch to consider the private market opportunities.

Even if the money wasn’t returned, investing in startups doesn’t feel like a zero-sum game, if you think about being part of an ecosystem that’s building tomorrows future. If you think about the middle class creatively participating in equity ownership. Most angel investors invest because they like the entrepreneur, or they like the idea, or they love giving others a chance to write their own story and create jobs for others, or they have an allegiance to economic growth and innovation that will have social and global impact.

Sure they’d love a return, but it’s not the only reason they invest.

We are also in a bull market. That means our risk tolerance is going up.

(Note: The NVCA figure of assets under management does not include the appreciation or value of the equity investment, but rather the amount raised by VC funds to invest. So it's not exactly an apples to apples comparison.)