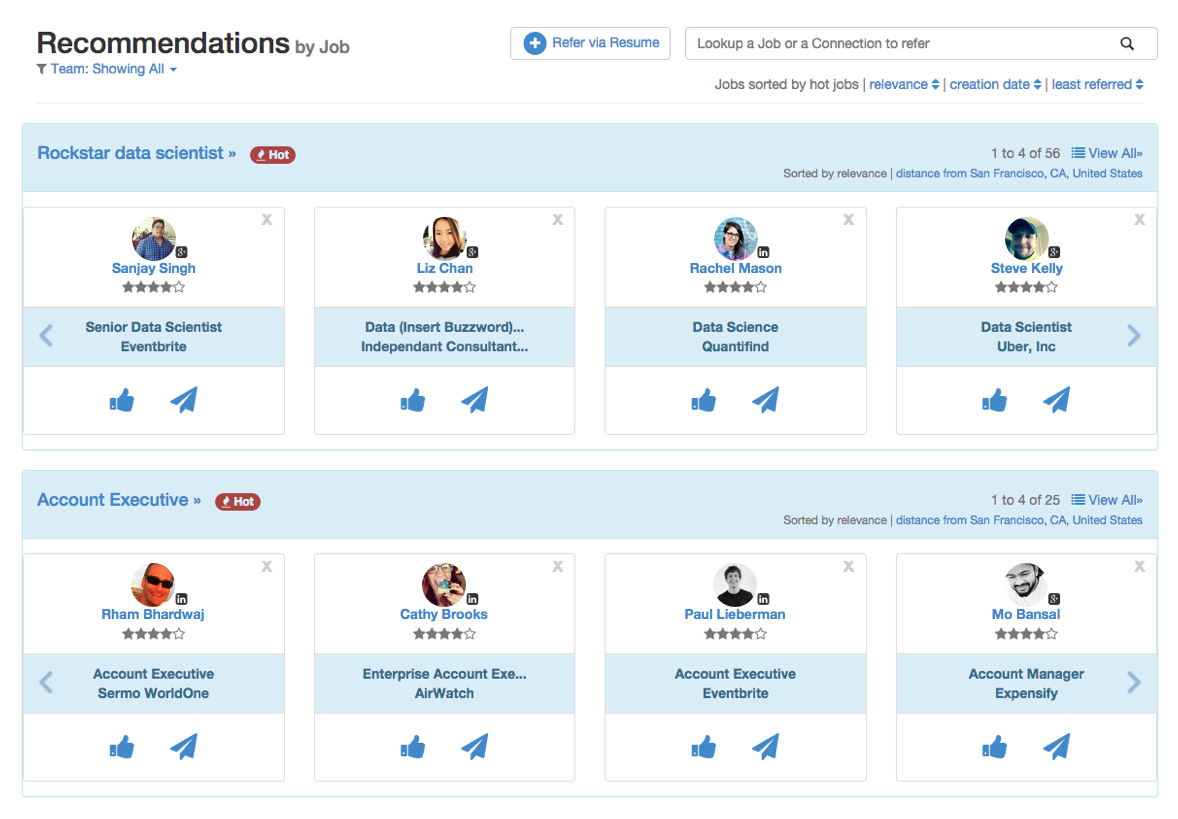 If you're like me, your inbox is filled on a weekly basis with requests for references from recruiters seeking job candidates. Requests are often afforded a cursory look before they're ignored and forgotten.

Not because you don't want to help your friends who may be looking, but it's time consuming to surface up friends who might actually be a good fit.

Simppler hopes to streamline that process by identifying those in your network (via LinkedIn or Google) who might be candidates for a particular job opening. Apparently, they've built a pretty good product with traction as Greylock Partners, Correlation Ventures and zParks Capital invested $1.2 million in a Seed round.

So why is this new recruiting app of interest? After all, don't LinkedIn or Monster and the myriad of other employment apps, like Jibe, which has raised $40 million in venture financing, or Jobvite,with its employee-referral feature, do a good job? Perhaps.

But from Simppler's point of view, it's lazer-focused on the sourcing and recruiting process.

Basically, Simppler is organizing your friends and colleagues into categories, like Netflix and Amazon do for your movie library or movie selection. If you're looking for drama and biography, then you're likely to find "Straight Outta Compton" under those sections vs the comedy or cartoon section. In like vein, if a job position is open for someone with marketing experience in the fashion industry, then Simppler will surface up your friends who have had marketing experience in the fashion industry.

It's quite logical, actually. But it does take a lot of know-how to order the data.

"We deep crawl and figure out where they’ve worked at and where they’ve studied and what presentations they’ve given," explained Vipul Sharma, Founder and CEO of Simppler. "We bring all of that together and run our recommendation system on top of it. So we tell employees that all they have to do is go through the list and introduce them to their recruiting team."

So how does it work? Simppler works mainly with in-house recruiters. Since going live at the end of 2014, the company has signed up large customers, such as Box, Change.Org, Reddit, MobileIron and Tilt. While the pricing is dependent on a number of factors, such as the number of employees, the average check size is in the tens of thousands for an annual subscription, said Simppler co-founder Shikhar Mishra.

Since signing on with Simppler, about 70% of employees across the companies have already provided a referral. At Tilt, Simppler is seeing 20 referrals daily.

With progress like this, it's a wonder the company decided to raise $1.2 million vs waiting for significant traction and raising even more money at a higher valuation.

"We were trying to get to product-market fit before we raised money," said Sharma, who explained that the company did bootstrap, starting in December 2013, with $90,000 contributed collectively by Sharma and Mishra. The two also raised around $150,000 to supplement the cash they put in. "But the next step is to take this to the next level... Sales is a big part of that. So now we're at a stage to get the word out there with a sales team."

As Sharma puts it: "It's time to double down."

Simppler is data driven employee referral platform. Built by industry's top data
scientists, our recommendation engine will automatically find the best connections for your employees to refer. Simppler not only makes it easy to get quality referrals, it also makes it easier to manage the entire referral pipeline. Rich referral analytics and pipeline workflow makes managing employee referral programs easy and fun.

Within few minutes of deployment you will see high quality referrals flowing in and with the ability to get introduced via your employees you will get higher response and interviewing rate.