Vamo will no longer be accepting registrations, and will remain operating until next month 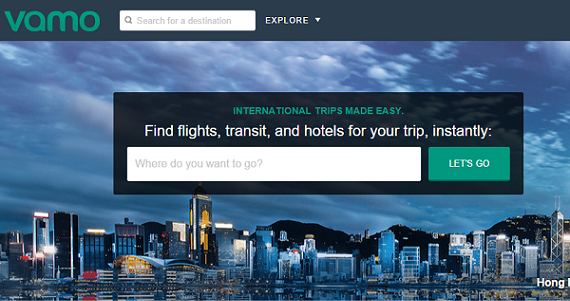 Airbnb has successfully disrupted the hotel industry in a way that, I think, very few people could have anticipated. Now the company is potentially looking beyond accommodations, and could be gunning for even bigger targets, like Kayak.

That could be why the company decided to acquire vacation planning platform Vamo, it was revealed in a letter from Ari Steinberg, Founder and CEO of Vamo, on Friday.

Vamo was a service that provides users with information that help them plan vacations. All users had to do was them a a list of destinations they wanted to visit, and Vamo would pick the best ordering based on ticket prices and availability.

Its algorithm would automatically find the best combo of low cost carriers, trains, buses, and ferries, as well as so-called "open-jaw flights," which is a round-trip ticket, where the traveler does not arrive in the place they departed, or does not depart from the same city where they first landed.

"So much has changed since we started, but our vision to make travel better has always been the same. That's why we're so excited to join the team at Airbnb," he wrote. "Complexities around international multi-city travel continue to exist, but we believe that in the long run we’ll be able to make even more significant improvements to the future of travel by joining Airbnb."

No financial terms of the deal have been disclosed, but this most certainly was an acqui-hire for Airbnb, as Vamo is no longer accepting registrations.

"Six people from Vamo will be joining Airbnb to work on improving the traveler experience. We are excited to have a team join us that is passionate about making the travel a better experience," an Airbnb spokesperson told VatorNews.

The company will continue to work until October 1, after which "functionality will become limited," Vamo said in an FAQ. Users will still have access to their old trips that have bookings, but they won't be able to create any new trips.

For users who have existing hotel reservations, and any reservation made by registered users before October 1, will remain unchanged and is still valid.

Founded in 2012, Vamos has raised $1.6 million in venture funding in 2013, from a long list of investors, including Ben Ling, Dave Morin, Max Levchin, Bono, Keith Rabois and Ali Partovi.

Despite being one of the best funded startups out there, which included the largest round ever raised by a U.S. venture backed company, this is a rare acquisition for the company. In fact, this is its first acquisition of this year, and only its second since 2012.

The last time Airbnb purchased a company was in December of last year, when it acquired Pencil Labs. the company behind scheduling app Wyth.