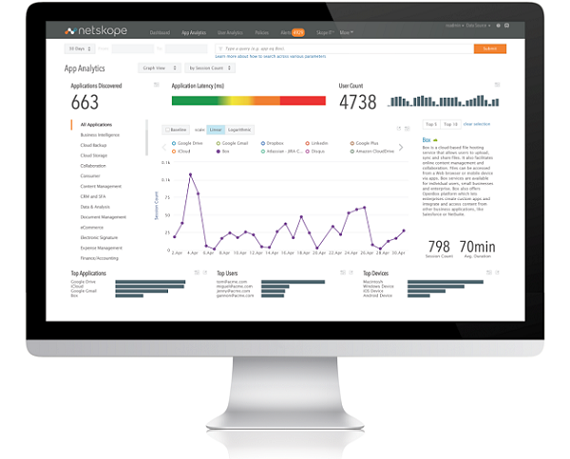 We've all been reading the stories about the high-profile data breaches that have been going on in the last few years. It started with businesses like Target and Home Depot, and most recently affected Ashley Madison.

As a result of these events, mandates are coming from boards of directors to ensure that organizations not only have visibility, but also actionable policies that ensure that sensitive business data is not shared, nor stored, where it can be easily leaked or accessed by a third party.

That is where cloud access security broker Netskope comes in. The company monitors and enforces policy over the sensitive data shared across the thousands upon thousands of cloud apps in use at businesses today.

The company announced $75 million in Series D funding on Thursday. The round was led by Iconiq Capital. Existing investors Accel Partners, Lightspeed Venture Partners and the Social + Capital Partnership also participated in the round.

Netskope had previously raised over $55 million, most recently a $35 million round in May of last year. The new round brings Netskope’s total amount of funding raised to more than $130 million.

"Today’s workforce demands tools that enable them to get their jobs done quickly and with more flexibility, or, put more simply, cloud apps. This often leaves IT departments to manage the proliferation of data being shared in the large number of unsanctioned cloud apps used in businesses, which is often up to 10X the number of cloud apps IT estimates are in use," Sanjay Beri, CEO and founder at Netskope, told me in an interview.

"To put this into perspective: this market, which Gartner has coined as 'cloud access security brokers,' has an implied valuation of $5 billion. It’s a massive problem for businesses across the board, and one that cannot be solved by traditional security solutions like firewalls."

Unlike others in this space, Netskope differentiates itself by being more precise, and going deeper, helping its customers gain a better level understanding when it comes to their data.

“More recently, we’ve been noticing a move that goes well beyond the discovery of cloud apps and leans toward a need for real-time governance and policy, which is a key differentiator of our technology. Unlike our competitors, only Netskope provides surgical visibility and control for all cloud apps, whether sanctioned by IT or not," said Beri.

"More and more customers are looking to go beyond the surface and obtain a deep transaction and data level understanding of their company’s cloud usage, and then set policies that can secure and govern it. This has been a dramatic change in the market that we’ve noticed among customers in different verticals. Enabling companies with a more granular, contextual understanding of cloud apps is the power Netskope wants to give companies."

"Another critical component of Netskope’s platform is coverage for mobile apps that access the cloud for data and app functionality. Most mobile apps are 'native mobile apps,' meaning not web-interfaces into an app) and no other provider is capable of tracking this usage. Netskope also provides a full-fledged DLP solution for cloud apps that looks at over 400 different file types across over 3000 different data identifiers. No other competitor provides all of this for all cloud apps in the enterprise.”

Over the past year, Netskope has grown its customer base by 500%, resulting in a 600% increase in
revenue. It does not reveal how many customers it has, but Beri would tell me that they "rank among the world’s top ten healthcare, insurance, banking, retail, and manufacturing brands, as well as some of the most diverse and cutting-edge high-tech, energy and utility companies.”

“We target customers of all sizes, from the mid-market company to the largest of the large organizations to the high growth enterprise, and count a good number of Fortune 500 companies across all verticals as customers," he said.

In terms of ROI, Netskope has found that 90% of apps being used be enterprises are unsanctioned, and that almost the same amount are not considered to be enterprise ready. On top of that, 13.6 percent of app users also have had their account credentials compromised.

"With Netskope, enterprises can make smarter decisions about cloud app policy and minimize risk by painting an extremely detailed picture of its cloud app ecosystem, including usage patterns," Beri said.

The new capital will be used to expand sales, marketing, customer success, engineering and research operations worldwide, adding to its current 250 person headcount.

It will also go toward building out Netskope’s performance cloud through new data centers across Asia-Pacific and Europe to meet growing demand.

“On average, IT estimates that there are 40-50 cloud apps in use in their organization, with only a fraction of those are officially sanctioned. The reality is far more staggering: according to a recent Netskope study, the average enterprise has 715 cloud apps in use, some sanctioned and many others unsanctioned. Unmanaged cloud app usage in enterprises can be a huge hindrance to organizations, making them more vulnerable to external attacks as well as increasing the risk of compliance failures," Beri said.

"If employees opt to use their preferred (and often unsanctioned) apps to be more productive, organizations often unknowingly expose their data in ways they cannot control or monitor. As the leading cloud access security broker, Netskope aims to bridge the gap between employees’ desires to be more productive in the enterprise and IT’s need for more stringent security.”