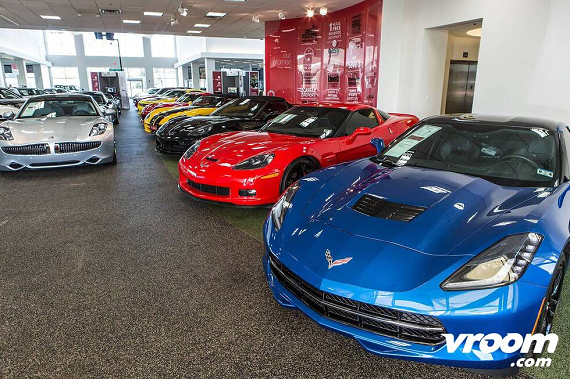 When I was a kid I went with my mother to help her buy a new car, and I remember how much of a pain the dealership was in their negotiations. She wound up bying a showroom car, meaning one that was already on premises, and the big fight she had with them over the destination fee they wanted to charge. How could they justify a charge for transporting something they already had? Who knows.

It's no secret that buying a car can be really stressful because of things like that. That is Vroom, comes in. The company online pre-owned car retailer that seeks to tack the hassle out of the experience by increasing transparency.

The company previously raised $19 million in Series A equity funding from investors including former NFL star John Elway; Steve Berrard, former president of AutoNation and Blockbuster; and the founders of Wix.com. This latest round brings the company's total equity funding to date to $73 million.

To use Vroom, all a customer has to do it go to the website to find  refurbished, pre-owned car with the exact, no-haggle price, which also included all local taxes and fees. They order it for free delivery to their front door, anywhere in the country.

"Americans love cars, but hate shopping for them. We wanted to provide the best possible customer experience with a focus on transparency, quality and affordability. Car salespeople are notorious for being untrustworthy, and the entire process is filled with unnecessary hassle. Vroom removes all of that from the equation," Allon Bloch, CEO of Vroom, told me.

"Our customers use Vroom usually from their homes, since they can get a great deal without the time and hassle it takes to buy a car from a dealership. With Vroom, they can literally buy or sell their cars without getting off the couch."

Customers can be anyone from a first-time buyer to an experienced car buyer.

"Our target audience is naturally the internet-savvy customer who already does most of their shopping online. We have happy customers from all ages, genders, all 50 states and 17 countries," said Bloch. "We even have some repeat customers, who buy one car from us and then buy more for their other family members."

The company sees its competition as mostly the tens of thousands of traditional dealers already out there. What separates it is not only its availability, as Bloch says that "Vroom is the only company that allows you to buy a pre-owned car online from anywhere in the U.S. with free shipping nationwide," it is more exacting in its pricing.

"When customers sell their cars to us, we do it remotely and use proprietary algorithms and pricing data to make an exact offer within minutes, rather than offering a vague appraisal. The cash offer is higher than what consumers would get from a dealership or competitor," he told me.

Ultimately, Vroom saves its customers time, including the process of trying to haggle with a salesperson, and money, as most of its prices are roughly 8% below market value.

"We work with more than 30 different lenders to make sure our customers are getting the best possible deal on financing," Bloch said. "We're changing everything consumers have come to know about the car buying experience by bringing it entirely online and saving our customers time and money."

Vroom currently has locations in New York City and Dallas, and will be using the funding to open new facilities around the country, "so we can offer 24-hour delivery to anywhere in the U.S."

"Delivery currently takes between one and four days, depending on the customer’s location. We currently have one 22-acre facility near Dallas, where we refurbish all the cars to peak condition, photograph them for the site, and store our inventory of about 1,400 cars," Bloch said. "We are also working on bringing the paperwork process entirely online by this fall."

In addition, the company just hired a new CFO, Zappos’ current VP of Finance, Michael Akrop, who has been with the company for almost a decade and reports directly to Zappos CEO Tony Hsieh.