Uber suspends UberPOP in France after riots and arrests

The service is currently being appealed to France's Constitutional Court, who will rule in September 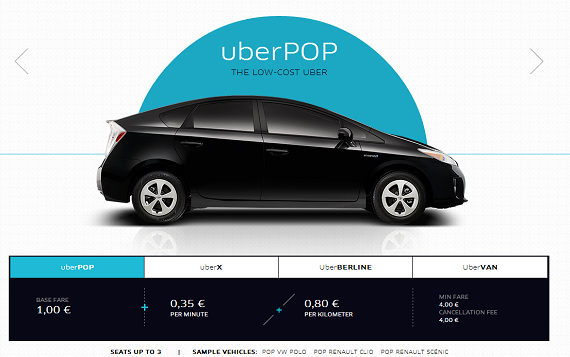 Things have been going just a little bit crazy for Uber in France lately, with strikes, riots and arrests by taxi drivers, some of it even affecting celebrities (oh no!), and all of it over Uber's peer-to-peer "UberPOP" service.

Now that things have gotten out of hand, the company is taking steps to remedy the situation, announcing that it is suspending the service in the country at 8 P.M. local time on Friday for the foreseeable future.

"In the light of last week’s violence, we have today decided to suspend uberPOP, our ride sharing service, until September’s Constitutional Court decision.  It’s a tremendously sad day for our 500 000 French uberPOP passengers, as well as the drivers who used the platform. However, safety must come first. Our regular UberX service, which uses licensed cars and makes up a majority of our trips each day in France, will continue to operate as usual," Uber said in a statement provided to VatorNews.

While the company says that its "priority now is to get these 10 000 partners back on the road as quickly as possible, potentially as licensed uberX drivers," it also points out the difficulty of getting that done.

"Unfortunately, the current licensing process has become too much of an obstacle course. It once took two weeks to get up and running with a license," the company said.

It already has 12,000 partners who have applied for a license and only 215 applicants who have received one. It can take six months, and now requires 250 hours of training, compared to 25 for a light aircraft pilot’s license, as well as a €1,500 down payment.

"We understand that new technology is disruptive:  not just for established companies, but for the people who work in them and their families. This is especially true at a time of high unemployment. But we believe there is a way forward that provides new opportunities for all drivers including taxi drivers, as well as passengers who love the convenience of services like Uber, Heetch and Djump," Uber said.

"Hundreds of taxi drivers have already switched over to Uber and are making a better living, with a work schedule to suit their family's’ needs. It is heartbreaking to see the violence in the streets when we know that taxi drivers can earn more on the Uber platform. It’s why we need to do a better job explaining and communicating the advantages of Uber to all drivers."

Launched in France in February of last ear, UberPOP acts like a cheaper version of UberX by attemtping to skirt around some of the requirements that drivers need to be drivers in that country; while UberX is restricted to professional drivers in Paris, UberPOP got around that by using unlicensced drivers. It basically allowed anyone to become an Uber driver. The company eventually had a total of 10,000 UberPOP drivers on the road.

As you might imagine, this did not make the French government very happy, and it even passed a law, called the Thevenoud Law, which said that all Uber drivers, even those for ridesharing services, had to follow the same regulations, and licensing, as existing taxi drivers.

When Uber appealed this decision, and kept UberPOP drivers on the road, this did not sit well with France's existing taxi industry. That resulted in in last week's incidents, as well as the arrest of Uber France’s CEO Thibaud Simphal and Uber Europe GM Peirre-Dimitri Gore-Coty earlier this week.

It should be noted that this is not the end for Uber in France, and it will still continue to offer its regular service, as well as UberX, in the countr going forward.

Uber is no stranger to legal problems and issues with local governments and existing taxi services. Everywhere the company goes, it seems, it runs into problems. But this move by Uber is notable for one reason: this only the second time ever, after pulling the UberX service in Portland late last year, that Uber has willingly shut down one of its own services, Thibaud Simphal, Uber’s general manager for France, said in an interview with Le Monde on Friday.

France's Constitutional Court will make a final ruling regarding the rules for UberPOP at the end of September.