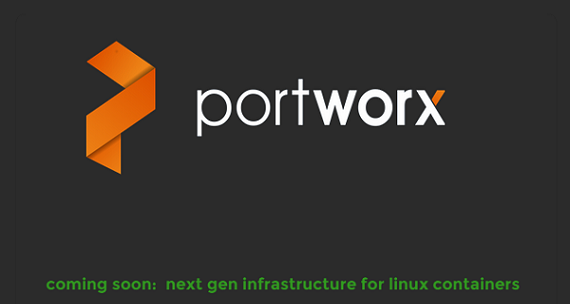 While containers are gaining a lot of momentum, and enterprises want to go in this direction, there are still some things standing in their way. Having multiple containers can cause problems with visability, for example, and storage features do not give them specific enough information about which container they are looking at.

Portworx, a startup creating the next generation storage software for hosting stateful applications in Linux containers, wants to change all that.

The company emerged from stealth mode announcing PWX Converged Infrastructure for Containers on Monday, along with $8.5 million in Series A funding. The round was led by the Mayfield Fund, along with participation from Michael Dell.

Portworx PWX provides elastic scale-out block storage natively to Docker containers, allowing Dockerized applications to execute directly on the storage infrastructure and containers to be persisted and scheduled fluidly across machines and clouds.

"Developer inherently like containers, because they provide a lightweight delivery vehcile that lets me I know if I have to deliver code through staging, and then production, what I tested, what I'm delivering, is self contained and packaged. It lets me surgically update, without breaking the code, and I do'nt have to cut the entire stack to make small changes," Gou Rao,Co-founder and CTO of Portworx, told me in an interview.

They also increase density, allowing developers to squeeze as much as 10 times as much as in a physical server

Enterprises cannot use Docker in production, however, for a few reasons. First, containers and data are not inherently portable or persistent across multiple nodes. Storage performance is not tuned for containers, causing multiple container bottlenecks, and storage features, such as snapshots and replicatio,n are not container specific but LUN generic.

"What we find are enterprises are not able to use containers for storage and networking. Devopps guys care about enterprise features but if I took 10 containers into a single VM, and took a snapshot, I could be snapshoting 10 unrelated containers," said Rao

Portworx solves this problem by providing container-aware storage, which enables data persistence across nodes, container-level snapshots, and storage policies to be applied at container granularity. It also provides converged storage, which ensures that containers run on storage nodes to maximize I/O performance.

What this means is that applications can be scaled rapidly without IT intervention, saving enterprises both time and money.

"Our vision is of a software defined data center and we see two things as necessary: for linux containers to deliver apps, and for them to have a programmatic way to do so," Rao told me.

While the container ecosystem is still early, and Portworx was only founded this year, by Rao, CEO Murli Thirumale and Chief Architect Vinod Jayaraman, he identified three main users for the company.

First, those building Web-scale applications, and who want them deployed as containerized images.

"There is a lot of momentum around Docker, and developers have very much bought into that company," he said.

And, third, enterprises, who have a "growing interest in containers."

"They are trying to deploy in an open stack environment, but find steps to deploy very problematic. They find openstack limiting, because they are tied to a version of the database that was already deployed."

The funding that the Redwood City-based Portworx has raised will go toward expansion and product development, with new released every two months. In three months from now it plans to have five to 10 customers, working with the product.

Ultimately, the company's goal is that everything move towars a self service approach.

"Philosophically, we want to provide a full solution, that comes out of the box ready to run. That is what culturally separates us from the competition," said Rao.

Portworx PWX enables the rapid deployment of stateful, distributed applications into production. With PWX, applications can be scaled rapidly without IT intervention. DevOps can provision storage to containers in an automated and container-centric way. This eliminates infrastructure tweaking and custom script writing that delay production deployment and scaling.