Namely raises $45M to help you with your HR needs

The company, which is used by 250 clients, also opened a new office in San Francisco 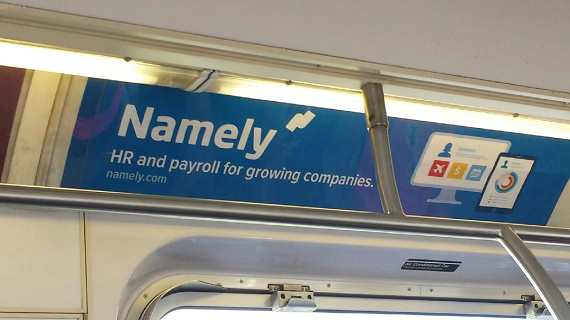 Most companies start out pretty small, with just a handful of people trying to do something big. If they are lucky then they will start to grow, which means hiring people. Eventually, the team will start to grow so big that they will actually need to hire an HR person just to handle all of its employees. It's a sign of growth, to be sure, but also one that small- and mid-sized companies might have trouble managing.

Namely, a provider of a cloud-based package of human resource applications, looks to help these companies manage their HR in a more efficient manner. And now it's raised $45 million in Series C funding, it was announced on Thursday.

The round was led by Sequoia Capital, with Matrix Partners, True Ventures, Lerer Hippeau Ventures, and Greenspring Global Partners also participating in the round.

The company previously raised over $32 million in funding, including an $11 million round in March of this year. Namely has now raised $77.8 million to date and it says that it has increased its valuation nine-fold over the last year.

The New York City-based Namely help its clients more easily manage all of their HR needs by providing services such as payroll management, which includes a full-service payroll system, from timesheets to tax withholdings, W-2s, and 1099s; benefits management, for medical, dental, vision and life insurance; an employee database with time-off tracking, reporting, and a social news feed; and talent management, which includes onboarding, cascading goals, performance reviews, and social recognition.

"HR is the last facet of modern business to be transformed by technology, and Namely was launched to bring this much-needed technological reboot to an industry often associated with the antiquated and inefficient practices of the past," Matt Straz, CEO and Founder of Namely, told me.

"We created a modern, comprehensive, user-friendly platform where companies can handle all of their human capital management needs in one place – and a platform that  employees actually want to use. Namely is creating the future of HR, one in which innovative companies provide an engaging environment for a new generation of employees."

In March of 2015 Namely added benefits to its offering, giving clients the opportunity to grow more efficiently by streamlining all of their human capital management functions.

"This addition makes Namely the first comprehensive HR software platform to also serve as a nationwide benefits broker. Consolidating HR, payroll, and benefits tools is especially important today as recent healthcare reform has brought these departments closer together than ever before," Straz said.

Namely is licensed to offer medical, dental and ancillary benefits across the country. By bundling these services together, Namely is able to offer an end-to-end HR solution to small and growing businesses who have always been priced out of major HR, payroll, and benefits software.

The company has been seeing tremendous growth. Its software is used in 20 countries by over 250 clients with over 40,000 employees. Some of its clients include Blue Apron, Mashable, Hailo, Sprinklr, Vimeo, Warby Parker, Percolate, and Tidemark.

"Namely is the HR software platform for small- to mid-sized fast-growing companies. We typically target companies with 20 to 2,000 employees – a huge segment of the market that has traditionally been underserved, as these companies have often been priced out of  comprehensive HR solutions from large vendors," said Straz.

"Our clients use Namely to handle all of their human capital management needs – including HR, payroll, and benefits – all on one seamless, easy to use platform."

In 2014, the company grew sales by more than 700 percent and since it launched its payroll features in June of 2014, Namely is now processing more than $1 billion in annual payroll.

Namely says that it will use the new funding to "further expand its reach, deepen its product, and build out its talented team."

Building out the team means a new office in San Francisco, which opened on Thursday, as well as a new New York City office later this year, with capacity for 500 employees.

With this capital, we plan to expand our reach, deepen our product and continue to build out our talented team. We recently opened a San Francisco office, and are moving into a new, larger headquarters in New York City later in the year. Namely currently has 150 employees – and we plan to continue to grow our headcount significantly in the remaining half of 2015," Straz said.

"Our product roadmap is focused on creating the first and most robust HR, payroll, benefits, and talent management offering built for these organizations. In the near term, this includes the addition of comprehensive company-wide reporting, added features to foster employee engagement, and upgrades to existing features allowing Namely to further scale with growing companies."

In addition to the funding, Namely also announced that it has appointed of Debra Squyres to be its new Vice President of Client Services. Squyres previously spent seven years at TriNet, where she was Executive Director of Human Capital Services.

Her appointment "will further strengthen Namely’s service capabilities as part of the company’s commitment to providing both great software and great service for its clients."

Ultimately, what Namely wants to do is to "create the future of HR—the easy and intuitive management of a company’s most valuable asset: its people," said Straz.

"Many growing companies have never had access to an end-to-end HR solution before. There are many enterprise level HR platforms and hundreds of point solutions that help growing companies manage
one aspect of their HR needs, but Namely is the first of its kind. The additions of payroll and benefits have made us the very first complete HR platform for small and medium-sized companies as they scale."