Each invested $118M for a 20% stake, as Softbank puts its first robot, Pepper, on sale in Japan 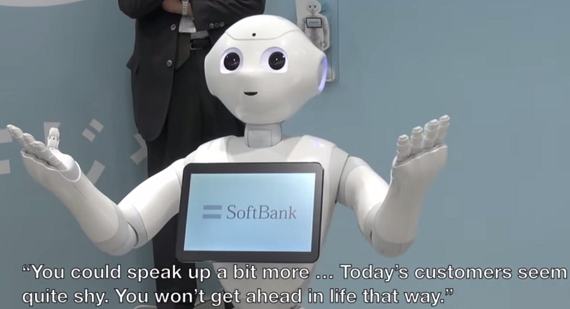 For decades movies have been warning us about the upcoming robot invasion. I mean, there's a new Terminator movie coming out in just a couple of weeks, people. Have we learned nothing? Even Steven Hawking, Elon Musk and Bill Gates are all afraid of artificial intelligence. And they are all much smarter than you or me.

So when it goes down, don't let anyone say that we didn't see it coming!

Ground zero for the war for humanity is going to start with Skynet... I mean Softbank, which has made two big announcements regarding its robotics division on Thursday, specifically in regards to Pepper, the "personal robot that reads emotions," which it unveiled in June of last year.

First, the company announced that it has reached an agreement with Alibaba and Foxconn, for them to help fund Softbanks's robotics division, with of them each separately investing JPY 14.5 billion (U.S. $118 million).

That will reduce Softbank's ownership of that division to 60%, giving each of the other two partners 20% each.

The partnership will allow the three companies to "build a structure to bring Pepper and other robotics businesses to global markets, and cooperate with the aim of spreading and developing the robotics industry on a worldwide scale."

“As we enter the data technology era, robotics will become a critical field that catalyzes technological breakthroughs in numerous sectors such as healthcare, public services, research and at home. Our partnership with SoftBank and Foxconn combines the best hardware and software talent in the industry to pave the way for robotics research and development," Jack Ma, Alibaba Group Founder and Executive Chairman, said in a statement.

"We are delighted to play an active role in the emerging field of robotics, that with cutting-edge technology and transformative products and services, can positively impact millions of lives.”

While Softbank is getting ready to take its robots worldwide, first it is going to release them to its native Japan, which brings us to our second piece of news of the day: Pepper is finally going on sale, starting on June 20th.

There will be 1,000 units available at first, and there will be a special drawing on June 19th for 30 units, which  will be held at SoftBank Tokyo Station GranRoof Front. People can enter from 10am to 9pm, and the winners will be announced on the SoftBank website at noon on the following day.

Pepper was first introduced last year as a robot that could not only understand words, but understand the emotions with which they were being said. You can see Pepper in action in the video below:

Since then, though, Pepper has gotten an upgrade and, according to Softbank, "has evolved to have emotions."

"These emotion functions in Pepper are modeled on the human release of hormones in response to stimuli absorbed by the five senses which in turn generate emotions," the company wrote.

It also has the ability to generate emotions autonomously by processing information from its cameras, touch sensors, accelerometer and other sensors within his “endocrine-type multi-layer neural network.”

And, finally, the company announced a new developer program for Pepper applications, which will be offered by Aldebaran, the joint developer of Pepper and subsidiary of SoftBank Group in France. The program will start sometime in early July.

So there you have it folks. Look at that face. It is the face of our future.