The company will use the funding to open a new office in NYC, and to expand its team worldwide 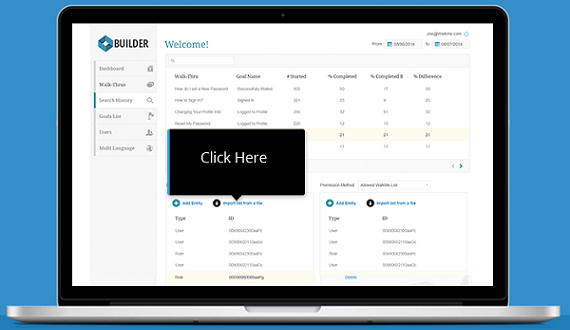 The Internet can be a confusing place. Just ask anyone over the age of 60. Oh, I'm only kidding!

But seriously, you have no idea how many phone calls I get from my mother asking me how to put photos up on Facebook. Literally no idea.

If only Facebook used WalkMe. It is a company that provides online publishers with the ability to create simple on-screen walkthroughs to make the Internet an easier place to navigate.

The company has proved exceedingly popular with its customers and with venture capitalists, who just poured another $25 million into the company, it was revealed on Friday. The round was led by new investor Greenspring Associates, and it also includes participation from existing investors Scale Venture Partners, Giza Venture Capital and Gemini Israel Ventures.

With this latest funding WalkMe has now raised $42.5 million to date, from investors that also includes Mangrove Capital Partners.

Founded in 2011, the Tel Aviv-based WalkMe calls itself "GPS for the Internet." It is a guidance system that layers on top of a Web page to “walk” Web users through.

So, for example, a bank may user WalkMe to show its customers how to use different features on its site, such as how to transfer money between accounts or how to pay their bills directly. Or an employer can use WalkMe to help with onboarding, assisting new employees with learning how to use their systems.

WalkMe ultimately saves its clients both the time, and the cost, of having to either create sales videos or PDF packets that can be hundreds of pages.

The company says it will use the funding "to further accelerate operational momentum and customer acquisition."

That means expanding with more locations; WalkMe revealed that it will be opening an office in New York City. It also means expanding its teams, as the company will be hiring more people at its headquarters in San Francisco, as well as in its offices in Melbourne, Australia, and in Tel-Aviv.

"We are expanding our marketing budgets, both online and offline, and we are expanding our team that works together with our growing partner networks," Dan Adika, CEO of WalkMe, told me. "We have 153 people today. Based on the plan we will cross the 200 mark by the end of this year."

The company has also announced that is has signed agreements with five new global partners: Accenture, Concept-EU for SharePoint; Aasonn for SAP Success Factors; ECENTA for SAP Cloud; and CPSG for Workday.

It now has close to 700 enterprises, governmental entities, universitites and software vendors as clients. Some of WalkMe's customers include Pandora, MasterCard, Intuit, Comcast, Citrix, Cisco, AT&T, Adobe, and PayPal. The service is used by hundreds of millions of people globally every month.

"WalkMe wants to change the world of User Experience as we know it and make it simple. We see zero tolerance to bad or complex UX," said Adika. "We will continue to be on the forefront of transforming the online experience. This funding will help us realize that goal and we don't intend to stop."