The firm has made 11 investments, and looks for companies that offer positive social benefits 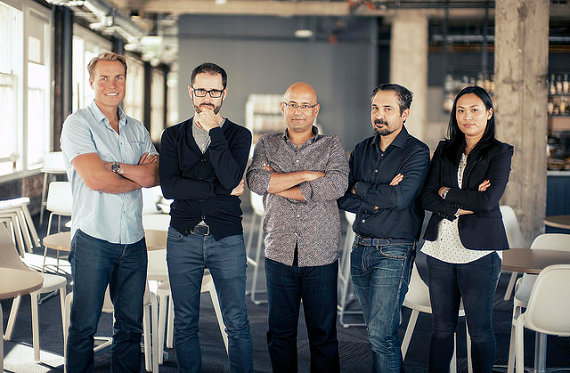 If there's one thing that will always be true about life it's that it's never a bad thing to have a sense of humor.

In this world of deal-making and venture capital I have to deal with lots and lots of numbers coming at me all the time, sometimes numbers so big they boggle the mind.  And yet, most of the time if you asked me to repeat them back to you an hour later I probably would have already forgotten them. Maybe that's because I was terrible at math in high school.

Today Obvious Ventures, the venture capital firm from Twitter co-founder Evan Williams, decided to have a little fun with that, announcing, via a tweet and a filing with the Securities and Exchange Commission, the close of its first fund, with a number that nobody will soon forget.

The firm has raised $123,456,789 for its first fund. (Am I the only person who just had the urge to go watchSpaceballs right now?) This is an update of a previous filing from March, which showed the firm raising $77.7 million.

This isn't the first time that Silicon Valley has decided to get cute with its numbers. In 2004, Google decided to raise $2,718,281,828, a.k.a. the mathematical constant "e" multiplied by 1 billion (don't ask me what that means, I already told you that I'm bad at math!)

"We really wanted to have fun with it. Sometimes this industry can take itself too seriously, so we wanted to show the world that we have a sense of humor," James Joaquin, co-founder of Obvious Ventures, told me in an interview.

The firm has been targeting a $100 million fund size, but it became oversubcribed, and as it got into the $120 million zone, the firm decided to reverse engineer from a final number, and, instead of hiding it, make it into a press event.

"We didn't tell every single LP that we were going to do this. The that way venture capital works, you have successive closes, so there were people who were already investors, but in that in the final close everyone knew that thought it was good fun," said Joaquin. "We havea a lot of very friendly limited partners, including Ev Williams and Leonardo DiCaprio, and  everybody thought it was a good reflection of our personality, in that we think a little differently and behave a little differently."

Obvious Ventures is one of the newer venture capital firms out there right now, having only beenlaunched six months ago, in December of last year, though the firm has been raising funding and making investments since early 2014.

On its Website, the firm says that it's investments fall within three categories: Sustainable Systems, People Power, and Healthy Living, and "startups that create new solutions to big world problems in a profitable and scalable way."

When it comes to Sustainable Systems, the firm says it is looking for "startups that create innovative ways to remake and reimagine the products and services we use every day," and ones that "that will enhance value and planetary impact across big markets like real estate, agriculture, and transportation."

With People Power, that means companies "that enable small businesses with innovative services previously only accessible to large corporations, citizens with platforms and networks for social change, students and teachers with breakthroughs in learning, and teams with new ways to share knowledge.

And Healthy Living means "startups that are pursuing massive improvements in human health, wellness, and performance across nutrition, fitness, and medicine."

While the firm does look for companies with a more positive social bent, Joaquin is quick to point out that that is not its sole purpose.

"We are sometimes confused with a category called social impact. I go out of my way to explain the difference. There is a lot of great work done in that cateogy, but we are an early stage vc focused on big profitable companies that drive big returns," he said. "We only invest in world positive companiess, which have some distruptive solution to a large systemic challenge, such as climate change and income inequality, or helping small businesses grow. Every dollar naturally has positive social or environment impact, but  we do not separate that out from measureing revenue."

The idea for investing in these types of companies came from a conversation between Joaquin, Williams and third co-founder Vishal Vasishth.

"We were asking why there weren;t arent more entreprenuers building companies to solve the great challenges of humanity. And the answer is that a lot of them go where the capital is. They go build the next messaging app because that's where they see VC funding and exits," Joaquin told me. "We want to change teh game, and move the needle to where there are more positive companies in the world, and change the root cause being that traditional venture capital doesnt fund those companies."

Ultimately the goal is to start the ball rolling and show entrwprenuers that there is money to be made in these kinds of companies.

"When we annouced our fund we used #worldpositive. We hope that this will be bigger than our fund, and that we will see other funds adopt same philopsohy, and that business schools will teach their MBA students to be trained to build these kinds of companies. We hope the whole ecosystem around these ideas spring up, but first we have prove it can be done by building great companies."

So far Obvious Capital has has made 11 investments in all, with a few more yet to be announced.

The firm makes an initial investment of between $1 million and $3 million in the Series A round, reserving more than half the fund for follow-on capital.

"The people that we've brought together for the team, including Evan, Vishal, who helped build Patagonia and Andrew Beede, who has experience with the solar industry, all of us have operating background, which is really important to our culture," Joaquin said. "We have the skill set of having built a lot of companies, some of which were success and others which were scar tissue, but that experience will help us grow our portfolio business. We also hope it attracts entereprenuers to partner with us, so we can hlep build their managemnt team, and help them grow their businesses."