ThreatQuotient, a cyber security software firm, raised $1.5 million in a seed round of funding led by Blu Venture Investors, Center for Innovative Technology, and the Virginia Tech Investor Network.

PiQube, an Indian human resources startup, raised a $500,000 seed funding round from The HR Fund.

Shipping startup ShipBob raised a $1 million round of seed funding from SV Angels, FundersClub, WeFunder and others.

Cintell, a customer intelligence platform, raised $800,000 in a Seed round led by Venkat Janapareddy.

Cytena, which as developed a device called cy-Clone to separate single cells, raised a €1.1 million seed round from a private investor and High-Tech Gründerfonds.

Visidraft, an Augmented Reality startup, raised $250,000 in a seed round led Hivers & Strivers.

MX, a financial technology provider, raised $30 million in a Series A round, led by USAA via a subsidiary, with participation from Digital Garage and others.

Travel marketplace Travel Triangle raised $8 million in a Series B round from Bessemer Venture Partners with participation from SAIF Partners.

Anacail, an ozone technology company, raised a £2 million Series A round from Sussex Place Ventures, IP Group plc and the Scottish Investment Bank, as well as a small number of private individuals.

Sticky, an online eye-tracking analytics SaaS platform, raised a $5 million Series A round led by Dawn Capital, with Northzone and Conor also participating.

MD Insider, a big data healthcare platform, raised a $9.5 million Series A round led by Jason Ader, along with Tim Ferriss and Bill Ackman.

MeeDoc, an app for patients to connect with their doctor via online video, raised €3.5 in a round from XLHEALTH.

Campus Job, an online marketplace for college students to find part-time jobs and internships, raised a $7.8 million Series A round led by General Catalyst, along with Index Ventures, SV Angel, Slow Ventures, BoxGroup and Lerer Hippeau Ventures, among others.

SimplyCook, a recipe kit service, raised $1.1 million in a funding round led by Episode 1 Ventures.

Tracxn, a research platform for private market investors, raised a $3,5 million round from SAIF Partners.

Albeado, a predictive analytics and causal modeling company, raised a $3 million funding round led by Brillio.

Flybits, developer of apps that deliver personalized experiences, raised a $4.75 million Series A round from Vodafone Ventures.

Icertis, a provider of enterprise contract management software in the Microsoft Cloud, raised $6 million in Series A funding from Greycroft Partners and Fidelity Growth Partners India.

Asian healthcare network DocDoc raised $8.6 million in a round led by Raymond Choong Yee How, with participation from Sparklabs Global Ventures.

Empathetics, a training firm that provides CME/CE-accredited web-based courses, raised a $1.5 million round of financing led by GDN Holdings and Key Venture Partners.

Travefy, a group travel planner, raised $1.8 million from from Travel and Transport, along with the Nebraska Global Investment Company, Nelnet, Columbia University, Linseed Capital, the Invest Nebraska Corporation, and a variety of Angels.

Rocana, a provider of root cause analysis software, raised $15 million in a Series B round led by Google Ventures with participation from General Catalyst, Toba Capital and Paul Sagan.

NetBase, an enterprise-scale social media analytics company, raised $9 million in a round led by ORIX Ventures and joined by Thomvest Ventures.

Infinidat, a provider of advanced enterprise-class storage solutions, raised a $150 million round led by TPG Growth.

DataTorrent, a platform for real-time distributed applications, raised a $15 million Series B round led by Singtel Innov8, with additional participants including GE Ventures and all existing investors.

Loop Commerce, an enterprise-grade SaaS solution, raised a $16 million round led by Oren Zeev, along with Dan Tierney and Stephen Schuler.

Babajob, an Indian marketplace for grey collar jobs, raised a $10 million round from SEEK Limited.

Signpost, a provider of consumer marketing tools, raised a $20.5 million round led by Georgian Partners along with Spark Capital, OpenView Venture Partners, Scout Ventures and the Launch Fund.

Validic, a digital health platform, raised a $12.5 million Series B round led by Kaiser Permanente Ventures.

Windward, a maritime data and analytics company, raised a $10.8 million round led by Horizons Ventures, with participation from Aleph, and other investors in the financial community.

Sticky is an online, biometric eye-tracking analytics company that helps publishers, advertisers and agencies make more money by knowing exactly what is seen and not seen in all their communication. Sticky has taken eye-tracking out of the lab by creating a cost-effective, highly-scalable webcam solution that goes beyond viewability to what’s actually SEEN™. Sticky's innovative disruptive technology gives publishers what they need to know the true value of their branding inventory and brands what they need to get increase the number of consumers seeing their message. Sticky is how to get more real humans engaged and paying attention.

Travefy is a free online group travel planner that solves the coordination headaches of travel. Through Travefy users can collaborate on trip itineraries, book travel deals, and manage shared expenses.

Travefy is free to consumers at Travefy.com and offers a white-label "Pro" version for travel agents and vacation providers.

Travefy has been featured in The New York Times, Network World, Entrepreneur, and Skift among other publications and has won numerous awards. 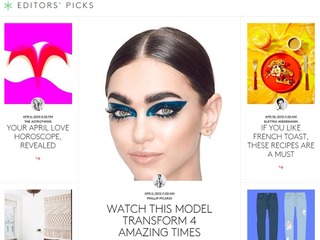 Refinery29 raises $50M to be a media company for women