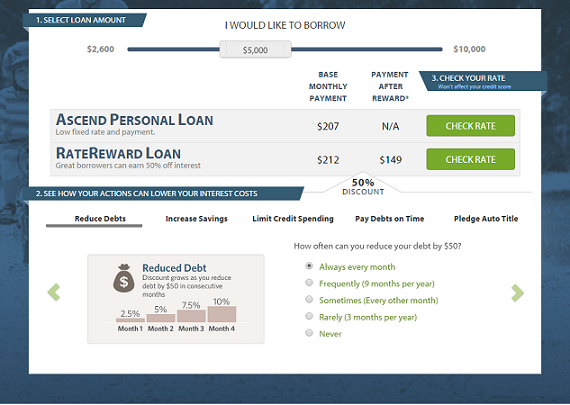 Most of us know that we are supposed to have an emergency fund, or a stash of money put away just in case. It can be for a medical emergency, or a costly home repair or a new car. Something important that costs a lot.

The truth is that most people don't have that kind of money laying around. And if the time comes when they need it, they aren't likely to get a loan from their bank because their credit scores aren't good enough. Millions of people, middle-class Americans earning between $40,000 and $70,000 a year, are left in the lurch.

Financial technology startup Ascend Consumer Finance has the idea that most people should qualify for those loans. Its new product, called RateRewards, can help them get it.

The company launched on Tuesday with $1.5 million in seed funding, The round was led by Mucker Capital, with participation from OCA Ventures, Birchmere Advisors and the venture arm of Securian Financial Group.

Founded in 2014, Ascend believes that a less than perfect credit score shouldn’t lock borrowers into a high interest rate. RateRewards enables borrowers to earn up to 50% off their interest expense by making responsible financial choices throughout the life of their loan. A  large number of non-prime borrowers can move up into a ‘prime’ score range within a year, if given the chance. However, because current lenders only focus on a borrower’s credit risk at time of application, they seem riskier than they actually are.

"Over 110 million consumers in the market would qualify as non-prime, meaning they have a credit score under 700. That means limited access to credit, so if they walk into a bank, and ask for personal loan, the bank wouldn't provide them," Steve Carlson, CEO of Ascend, told me  in an interview.

"They have limited avenues to turn to, and they get a high price because of their credit profile."

Other similar companies, like Springleaf, will offer interest rates between 25% and 35%, what Ascend does is offer loans to people who normally would not qualify, offering them 50% lower rates based on certain behaviors that the company can monitor through its proprietary technology, called Adaptive Risk Pricing. That means their loan rates reflect real-time performance instead of past behavior..

Some of those behaviors include the ability to lower their overall debt level by $50 a month, restructuring their credit card spending and the ability to build up an emergency savings accounts

"We looked for positive behaviors which are easy for the borrower to understand, which people can achieve, and also help us to separate out risk," Carlson explained.

In addition to offering lower rates than its competitors, Ascend also "offers a much better customer experience," Carlson said.

"Our two largest competitors are branch-based businesses. It's a painful process to take out loan. It involves going in the office two to three times, and signing a lot of paperwork," he said. "We are an online experience, and we fund the money directly to the borrower's account."

The other thing that separates Ascend is what it offers from a product perspective.

"This has never been done, the ability to provide, with a little more data, the ability to adjust the loan in real time by changing the risk profile. You can’t find that anywhere else," he said.

"In the auto insurance space, with Progressive, you can take a chip, put in your car and demonstrate good driving behavior to save 30%. John Hancock recently introduced a thing if you wear Fitbit and measure your physical activity, you can save 15% on life insurance. We are bringing same thing to consumer finance. We truly believe the convergence of data and tech will lead to individually priced items across the spectrum and empower consumers to drive the pricing."

Ascend says it will use its new funding to roll out its Adaptive Risk Pricing technology. It currently operates in two states, California and Utah, and will be in five more states, including Illinois, Texas and Oregon, covering 34% of the U.S. population, by this summer.

Ascend believes that a less than perfect credit score shouldn’t lock borrowers into a high interest rate. The company’s pioneering product, RateRewards, enables borrowers to earn up to 50% off their interest expense by making responsible financial choices throughout the life of their loan. Through proprietary technology called Adaptive Risk Pricing, Ascend is able to offer loans at rates that reflect real-time performance instead of past behavior. Based in San Francisco, the Ascend team has significant experience in consumer lending, data analytics, and consumer technology. The company is funded by Mucker Capital, OCA Ventures and the venture arm of Securian Financial Group. Learn more at www.ascendloan.com.