The company, which will be nationwide by the end of April, will use the funding to build its team 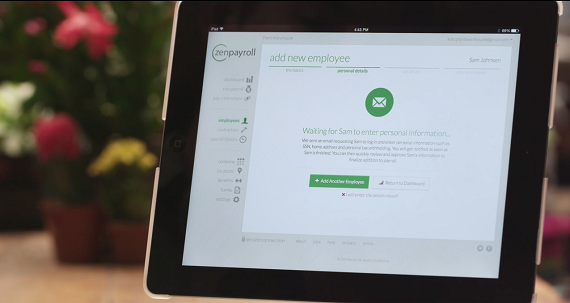 Today people think of payroll as a painful, tedious chore that forces businesses to deal with unnecessary complexity, manual tasks and numerous fees. ZenPayroll, a payroll service enabling businesses to set up and run payroll from any web enabled device, is on a long-term mission to modernize the payroll industry and connect companies with their employees in a more meaningful way.

Now the company has raised $60 million in Series B funding, in a round led by Google Capital, with participation from Emergence Capital Partners, Ribbit Capital, and others, as well as existing investors including General Catalyst, Kleiner Perkins Caufield & Byers, and Google Ventures.

ZenPayroll had previously raised over $26 million, including a $20 million round in February of last year. This latest round brings its  total funding to date to $86.1 million, with other investors including the CEOs of Yelp, Dropbox, Evernote, Instagram, Eventbrite, WordPress, Instagram, Box, Stripe and others.

“We are proud to welcome Google Capital to the ZenPayroll community. Not only does Google exemplify the power of technology to improve people’s lives, they also share our core belief that people are the most important part of every business,” Joshua Reeves, CEO and co-founder of ZenPayroll, told VatorNews.

“We are building a future where everyone can reach their fullest potential at work. That mission is part of everything we do, from designing the product to serving our customers to growing our team. We are excited to benefit from the talent, passion and strategic expertise of Google’s technology and product leaders.”

Launched in 2012, the San Francisco-based company helps makes payroll services simple for small businesses. It automates the complexity of payroll taxes and compliance, and helps employers strengthen their relationships with employees.

Since raising its Series A round, the company has grown over 10 times, and is currently processing billions of dollars in annual payroll for more than 10,000 small businesses across the country. The company supports businesses in 47 states and the District of Columbia, representing over 98% of the U.S population.

The market opportunity for payroll processing is massive, as there are six million businesses in the U.S. that need payroll and, ff those 6M businesses, almost all of them are small businesses with under 100 employees.

Even though Paychex and ADP, the two biggest players in the payroll industry, are worth a combined $60 billion, they only serve one million of those six million businesses. Over 40% of small businesses still run payroll by hand with paper or spreadsheets. As a result, every year, a third of small businesses get fined for payroll tax mistakes. By using ZenPayroll, they can avoid those penalties.

By the end of April, ZenPayroll says it will support businesses nationwide and, as such, the company will be using the funding to expand its across the board, hiring in engineering, product design, customer care, sales, marketing, business development, and more. It currently employs approximately 84 people in its headquarters in San Francisco.

It is also looking to open another office in the Eastern time zone to expand its customer care hours, but the company not decided on a location yet.

It also also building out features and functionality that will make ZenPayroll a better fit for larger businesses, in order to help all businesses everywhere, regardless of size. That means expanding its market to include larger businesses, not just moving upmarket.