Company plans to unveil next generation technology at SXSW 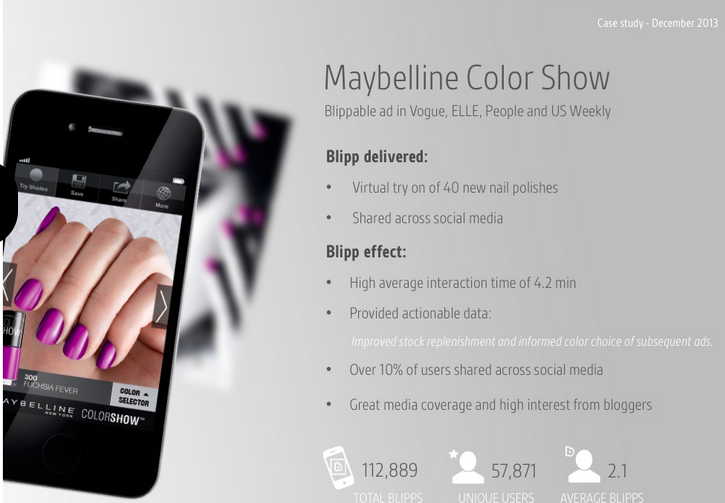 Blippar, an augmented reality ad platform, announced Friday that it has raised $45 million in new funding from unnamed investors.

The company's unique advertising mobile platform uses real tags in offline scenarios in order to tag objects by using a smartphone, thereby tagging it with a "Blip", a real-world marker or real-world reference point. It is a visual browser for mobile targeted specifically at customer-brand interaction.

It's a game changer in shopping decision making. Let's say you aim your phone using the app to a nail polish bottle  and in the AR view, you will see a set of fingers wearing that specific nail polish color. It may be a bit disconcerting at first but is here to stay.

Blippar is used by major big brands for various campaigns, such as Coca-Cola and Audi, which has used it at various auto shows to display cars. Even Justin Bieber got into the AR game to reach out to his "Bielieber" fan base.

Blippar plans to turn any smartphone into a "magic lens" giving the user not only an interactive view on the object but load all of the online additional information surrounding that object or event. Information such as a purchasing page, a product review, pricing at different locations and shares from Instagram, Twitter and the rest of the social sphere. It will deliver a world of new information regarding this object that will feel palpable.

Its next generation platform, soon to be unveiled at SXSW 2015, will open the door to a new way of doing searches and gathering and sharing product information.

For this company, the latest funding marks the next chapter in the evolution of Blippar," Ambarish Mitra, Blippar Founder and CEO, told VatorNews.

"To date, Our technology has proven to be successful in driving branded experiences, while also gaining traction among consumers as an effective solution for visual communication,"he said.

"The new era of Blippar transcends language and literacy by using the mobile device to instantaneously access relevant content directly from any object in the physical world. We are excited to unveil our next generation technology at SXSW."

The company also told me that it plans to use the extra funds for "expand our engineering team and to invest in developing our new technology at a global scale."

Most impressive is the company's users base globally, which is what it told VatorNews, sets it apart from the competition.

Following its acquisition of Layer last year, Blippar now has over 50 million users.

Blippar is based in the United Kingdom.