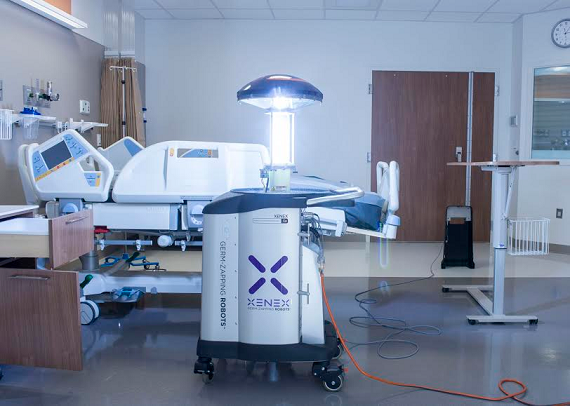 Nobody really likes going to the hospital, do they? Part of the reason for that, I think, is that hospitals just feel inherently unclean. And that is not an illusion: they generally are. in fact hospital aquired infections are so common that they are fourth leading killer in United States. Two million people get them every year, and 100,000 die from them. It’s even worse in other parts of the world.

Xenex Disinfection Services has finally found a quicker, and much cheaper, way to fix the problem, by using UV room disinfection systems for healthcare facilities. And now the company has just raised a $25 million in new funding.

The San Antonio-based Xenex uses a xenon ultraviolet (UV) disinfection system that completely eradicates all germs, even drug-resistant superbugs, including c.diff, which is the hardest thing to kill, Morris Miller, CEO of Xenex, told me in an interview.

It’s a new way of fixing the problem, one that takes much less time, and is more effective, than old methods.

“Around six years, there were around 20 companies that had mercury lamps, which are akin to florescent light bulbs, and were running around get hospitals to adopt. While mercury has some disinfecting ability, the average time it takes to disinfect is 2 hours and 15 minutes,” he said. “Some others were using hydrogen peroxide gas, spraying it, but that can take four hours to disinfect.”

Using xenon is so powerful, Miller said, that it takes four minutes to kill c.diff; without that, it would give everything else in 90 seconds. That is because mercury is narrow spectrum, while pulsed xenon has an extremely broad spectrum. It's so intense that it  can burn 25,000 times brighter than sunlight.

The company is now being used by 300 hospitals; each robot costs $100,000, but Miller says that each hospital will make their money back in at most four months.

The financing will be used for increasing the company's U.S. sales force. The company currently has 85 employees, and plans to add another 20 or 30 with this funding.

More importantly, the funding will be used for expansion, both international and domestic. The company is in almost every major market now, as or Miller put it, "all of the NFL cities, except two or three." He wants to make Xenex "ubiquitous in the U.S."

As for international expansion, the company will be putting its focus on Europe, Asia and the Middle East.

.European countries, Miller said, "approach medicine more or less the way we do," while in Asian,  in places like Hong Kong, Japan, and Singapore they "care about their citizens want to provide them with good medicine."

One other country that Xenex is look at is Saudi Arabia, and other countries in the region who are "trying to become medicine Meccas," Miller said. "They wan to convert from oil and gas economies to healthcare economies."

One place that would seem to need some help in this regard, especially with the recent Ebola outbreak, are countries in west Africa. Xenex has actually tried to get its product to these regions, Miller told me, but ran into barriers with their governments.

"It's also hard because they are operating on dirt floors, so their problems go beyond what we can do,"  he said and without four walls and a ceiling, it becomes much more difficult to kill the germs that it can in cleaner environments.

Xenex was founded in 2009, and has been selling its product for two years. In that time it has disinfected 1.5 million rooms, prevented 75,000 infections and saved 3,750 lives. And those numbers are growing daily.

The goal, Miller told me, is to make it so that xenon lamps can be used every day, by anybody working in the hospital, saying that the company wants to "stop suffering, and save lives and everyone can get behind that."

The company had previously raised $24 million, including an $11.3 million round in November of 2013. This latest round brings its total funding to $54 million.