Don't be a small fish in a big pond, and don't lie to yourself about how you are different 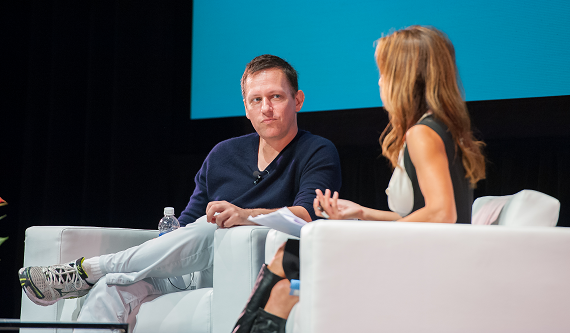 When people hear the word monopoly, the first thing they likely think of is the board game. Next, they might remember high school history class, Teddy Roosevelt and the "trust-busters." Generally, in the real world, having a monopoly is not seen as a good thing, simply because they allow companies to get stagnant and stop innovating yet continue to thrive (think about the increasingly small number of cable companies and airlines we have to choose from, and how prices keep increasing while quality has been plummeting).

To Peter Thiel, though, monopolies are a good thing, at least from the point of view of the business. Or, as he put it at the Post Seed Conference, "competition is for losers." Thiel sat down with Vator founder and CEO  Bambi Francisco at  Post Seed Conference, hosted by Vator, Bullpen Capital and  Venture51.

Francisco pointed out that she agrees that competition is indeed for losers, but  most startups actually already believe this and they look for areas to innovate where others aren't. And typically they find a small market to go after first. So it's not so unorthodox to believe in this statement.

"There is obviously some degree to which this is very standard business advice, where you advise them to do things that others are not doing. I do think that using the 'M word' is somewhat helpful. I do think that if you're a founder or an entrepreneur or investor, you want a company that’s going to be a monopoly. And you want it to be so differentiated from the rest of the world that you have real pricing power. So I do think that's very worthwhile as a focus. In practice, people will often fudge on this to some extent. So they'll say, 'Well, wer'e somewhat different and somewhat competitive.' And you end up with somewhat of a fudged answer. From there it's easy to slide into something that's incredibly competitive."

The reason that companies do this, he said, is because they are uncomfortable with being a monopoly because they "don't get validation from other people."

'If you're doing something that's really competitive, there are lots of other people doing it, and that ends up being validating, even though it's maybe a dumb idea," he said.

In his own experience, Thiel said that he went to Stanford for undergraduate and law firm, which he said was a place where "everybody on the outside wanted to get in, and everybody from the inside wanted to get out." So he left, and but his co-workers were wrapped up in the battle to win that that's what they thought was important.

"If you are no different from somebody else, the battles will be much more ferocious," he said. "I do think there's this deeply psychological thing where we get attracted to this stuff. If want to compete like crazy you should open a restaurant in San Francisco. You'd say, 'Obviously that's such a dumb idea and obviously nobody's opening restaurants in San Francisco.' And that's not quite true. And what, instead, happens is people open restaurants and they tell a fictional story of why it's not really competative. 'Ok, this will be the only British-Nepalese fusion cuisine. And it's going to be nice but not too expensive and it's going to be really great.'"

Francisco then pointed out that Thiel himself had once opened a restaurant, to which he replied, "I learned a lot from that."

"So I'd say the monopoly theme is a super important starting point, but it's much easier said than done. And there's all these pitfalls where people will have all sorts of fictional stories of why they differentiate, why they're unique," he said. "There have been important categories where people I think did not do this. The clean-tech space of the last decade, every single PowerPoint presentation you saw, it started with, 'We are in this giant market, its called energy and it’s in the hundreds of billions or trillions of dollars.' And that certainly says, you're a minnow in a vast ocean, doesn't matter if its a red ocean or a  blue ocean, it's always a red ocean. If you don’t know what else you're up against, that's not a place you want to be. So I think you do want to have some story about going after small markets, taking those over, and then building out in concentric circles. There's always a risk that the story's fictional, but you should try not to lie to yourself."

Later when someone in the audience asked about whether Google is currently in decline, Thiel used the opportunity to talk about why anti-trust is generally useless.

"I don't think monopolies, in general, are permanent. With innovation, and technology, there's always a risk that a monopoly gets replaced or loses power over time. So it would be unrealistic to say, 'I'm only going to invest in companies that have permanent monopolies.' I think if you have a 10 or 20 or 30 year run, that’s still pretty good and I think most of the time, most of the companies that you look at, they go straight to the restaurant, where there's no monopoly ever, you never make money, and just lose the money pretty quickly. I'd much rather invest in a Google, even if it's not something permanent," he said.

"Government regulators have typically gotten it wrong where anti-trust concerns seem to rise at the precise moment where the monopoly is naturally starting to fade. This was certainly true with IBM in the late 70s, when people were shifting to software, and I think this was also true of Microsoft in the late 90s, when people were shifting to the Internet. There are different stories people can tell, but I think it would have happened even if there had been no anti-trust action against Microsoft. Even though I'm somewhat agnostic on where Google is, if had to make the anti-Google argument, it would be that the European anti-trust regulators are starting to move pretty hard against Google, and since the government always seems to time it incorrectly, I would take that as evidence that it's just at the point where the monopoly is starting to fade."