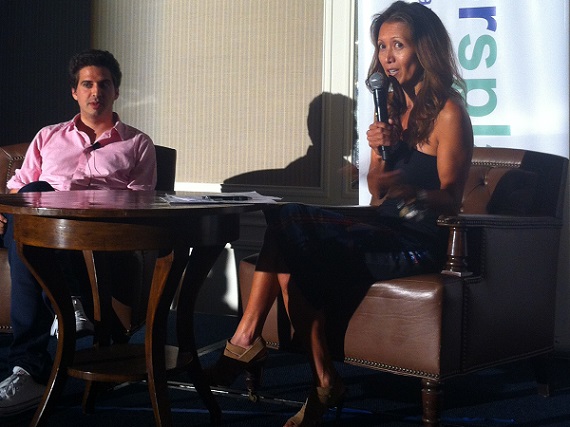 "Whisper is as safe as Israel." I almost made that the headline of this story.

That is what Michael Heyward, Founder and CEO of  Whisper, essentially said, after all, but I wanted to take the high road as did Vator Founder Bambi Francisco, while she interviewed Heyward on stage at Vator Splash LA last week.

"People think that Israel is not a safe place. Israel is actually one of the safest places on the planet," said Heyward. A comment she didn't touch, since he had already seemed a bit defensive. Just minutes before his Israel statement, Heyward invited the audience to visit Whisper's confession booth and share their secrets. That statement prompted Francisco to say in jest, "And Michael Heyward will absolve you of all your sins."

Indeed, a Whisper confessional is hardly the same as the sacrament of penance. But it wasn't clear if Heyward knew that too. Clearly, he believes Whisper can be the modern-day sounding board. And in fact, we agree that Whisper can no doubt have positive effects, giving a voice to the voiceless and encouraging people to open up in ways they might otherwise not have been able to.

At the same time, there is always the flip side to that: people who would use anonymity to do and say things they might otherwise be ashamed of.

Obviously the vast majority of posters will not cause a problem, but, as they say, one bad banana can spoil the whole bunch. Look at what is happening to the Secret Service right now; people aren't rushing into the White House every day, but one gets through and it threatens to topple the whole agency.

So during the interview, Francisco talked about the site's responsibility to create a healthy online conversation and asked how it would safeguard against the trolls.

Heyward began by acknowledging that, yes, there is the potential for damage, but he extenuated the positive aspects of what the site can do.

"When we first started, my co-founder Brad and I believed that this had, not only, the potential to be a safe place, but a place that actually made actually made the world better. You know, anonymity is a tool, like any tool, like a hammer. All the great things you can do with a hammer, with hammers you can build temples or churches or schools or anything. But you can also kill someone with a hammer," he said.

The site is empowering a lot of really positive use cases, and not all of them are necessarily going to be happy, but that's perfectly fine, since its actually better to not pretend like life is perfect all of the time. Giving people a place to vent about their negative feelings is actually a good thing.

"Not everything is this perfect, shiny, bubblegum persona that we're seeing on all of these ego-based networks," said Heyward.

What users write doesn’t have to be positive, but they have to feel safe writing it. Whisper is definitely aware of the potential for mischief and harm from others, though, and takes major precautions to prevent it.

"We don't allow you to use anonymity to hurt other people, only to protect yourself. So you cannot use any proper names on posts on Whisper,” Heyward said, "We allow conversations about public domains, so you can talk about Justin Beiber, or Obama, the Lakers, and things like that."

And so the site winds up taking down posts down every single day that violate those terms.

"We have to very strongly enforce safety in this community. We don’t take this laissez faire platform approach, where we let the community decide and we have flagging," Heyward said. "We have 130 full-time moderators then, actually, a large group of people that oversee those moderators, 24 hours a day."

What it really comes down to for Heyward is the tone that Whisper sets for its own community. Heyward believes that the networks themselves are ultimately responsible for how the community interacts with each other.

"We're not only about making sure that people feel safe, but that we're really setting a positive tone for the community," said Heyward.

"Chat Roulette started off really innocent, and then what happened was you had these bad actors who came on there and then set the social norm that this is a place where people come and take their clothes off. That's actually not normal, most people don't do that. So what happens with these communities, and you see this with social networks all the time. I mean, people are witty and funny on Twitter because everyone else is witty and funny. There's all these rules baked into Reddit about trolling is like badge of honor. It's not that everybody just decides to do that, initial actors start to do that, and they set the norm."

The norm on Whisper is that it is "an incredibly supportive place," one where, every day, people say that their interactions on the site saved their life, because it helped them feel like they were not alone. And because of that, Heyward called Whisper the "safest place on Internet."

There's a big misconception about Whisper not being a safe place, he said, making that Israel metaphor.

"There are very few places that you’d be safer than in Tel Aviv," he said. "And the reason for that is because there's a cop on every corner. And Whisper is the same way. Our single biggest expense is around moderation."