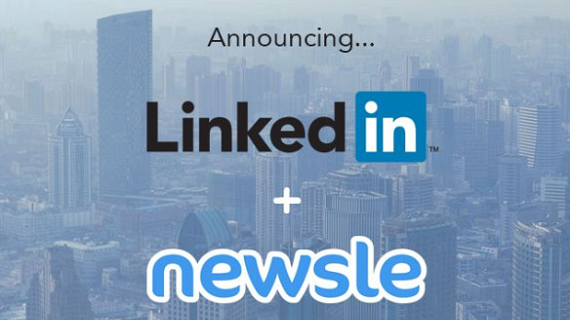 Over the last year or so, LinkedIn has been on a mission: go from being a network that you check every once in a while to one with new, and original, content to make the site sticky and relevant. In essence, it wants to be a professional publishing platform.

Step one was getting people to create original content, and the next step is getting those updates to its users, and for that LinkedIn has acquired Newsle, it was announced on Monday. No financial terms of the deal were revealed.

The San Francisco-based Newsle is a web application that allows users to follow real news about their Facebook friends, LinkedIn contacts, and public figures. In a manner similar to Google alerts, the service scans the Web for mentions of a specific person, and instantly delivers the post or article in which that person was mentioned.

While Newsle's technology will be combined with LinkedIn's core functionality, the company will remain as a standalone service, as least for the time being.

One of the more interesting moves that LinkedIn made in the direction of being a publishing platform was the introduction of "influencers," or people who users could follow, getting their status updates and original posts, in 2012. Originally consisting of only a few important figures, such as Barack Obama, Arianna Huffington, Richard Branson, Mitt Romney and Reid Hoffman, The program was recently expanded to include everyone on LinkedIn.

For LinkedIn, not only will having this technology help it push out that original content, and get it into the hands of its other users, but it will also be an added benefit for users who want to know more about their potential employers. What could be more helpful than sitting in the waiting room, about to go in for an interview, and getting the latest news on the company you are about to meet?

"LinkedIn and Newsle share a common goal: We both want to provide professional insights that make you better at what you do. For example, knowing more about the people in your network – like when they’re mentioned in the news – can surface relevant insights that help you hit your next meeting with them out of the park," LinkedIn wrote in a blog post.

In its own separate announcement, Newsle reiterated a similar sentiment.

"LinkedIn is equally passionate about offering insights that can help professionals better do their jobs and will help us accelerate our efforts by making Newsle available to its members," company co-founders Axel Hansen and Jonah Varon wrote.

In addition to Hansen and Varon, the company's team of engineers will also be making the transition to LinkedIn.

Founded in 2011, Newsle says that it has two million users. It has raised $2.6 million, including a $1.8 million seed round in November of last year. Investors in the company include Lerer Ventures, Advance Publications and ACBJ, SV Angel, Bloomberg Beta, Maveron, DFJ, Transmedia Capital, Launny Steffens, Ellen Levy, Jon Lazarus, Paul Berry, and Rockwell and Evan Schnabel.