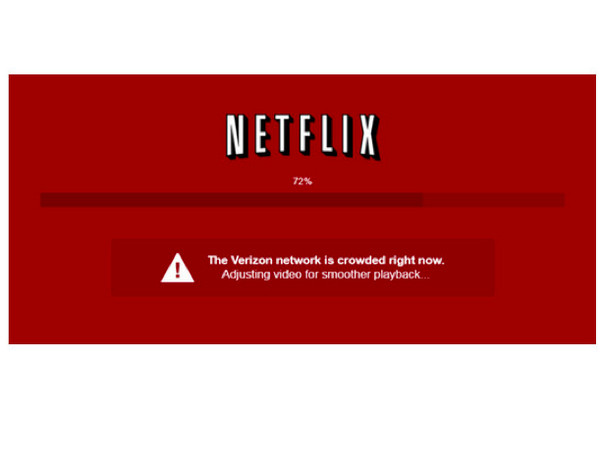 So last night I was reading a Salon article on the most feminist sex scenes of all time, and of course I had to show my husband, because obviously. But as I was trying to show him the particularly graphic scene from In The Cut (omg, you guys…), the video started freezing and sputtering. And then I remembered: primetime streaming hours. So thanks a lot, Comcast. Thanks for killing my boner.

Earlier this week, Netflix started calling out Verizon in a test to alert members when their ISP network was crowded and causing buffering delays. In an error message first spotted by Vox Media journalist Yuri Victor, Netflix apologized thusly: “The Verizon network is crowded right now…Adjusting video for smoother playback.”

Verizon was obviously not cool with that explanation and wrote up a whole blog post insisting that the fault lies squarely with Netflix.

“It would be more accurate for Netflix's message screen to say: ‘The path that we have chosen to reach Verizon’s network is crowded right now,’” wrote Verizon’s VP of Federal Regulatory Affairs, David Young.

But now, Verizon is seriously serious about not being okay with Netflix’s error message, and it has sent an open Cease & Desist letter to Netflix’s legal counsel.

“Netflix has the ability to directly connect with every broadband network in America should it choose to do so,” the letter states. “Instead…Netflix relies on a panoply of content-distribution and other middle-man networks to reach its customers, trying to lower its costs as much as possible. The cost/quality tradeoff is one Netflix has chosen.”

In other words, Netflix could simply pay for a “fast lane” from every Internet Service Provider—which it’s already done with the two biggest ISPs: Comcast and Verizon (which makes this whole thing all the more confusing). But instead, Netflix wants ISPs to provide better streaming quality of their own accord…

I mean, sure, you could argue that Netflix—a notorious bandwidth hog—could simply buy roomier tubes to subscribers’ homes. But you can also argue that video now drives 50% of all Internet traffic, and as subscription video-on-demand services and over-the-top streaming services become more commonplace, ISPs are going to have to accommodate all of that non-Netflix traffic. They are generating revenue off all that traffic, after all.

But Verizon doesn’t leave it there. The company goes on to make several demands of Netflix that must be fulfilled within five days of receiving the letter, or Verizon will seek legal recourse. Verizon is demanding Netflix providie documentation and evidence to substantiate its claim that poor streaming quality is due solely to Verizon’s congested network. It’s also demanding that Netflix provide a list of all Netflix subscribers who received the error message blaming Verizon for the poor streaming quality, with the date and time that each message was displayed, along with the evidence of Verizon’s fault. 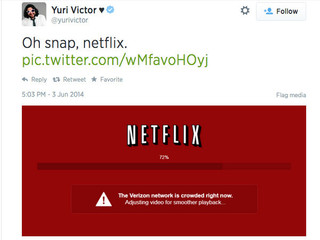