Amazon is ramping up its online grocery game 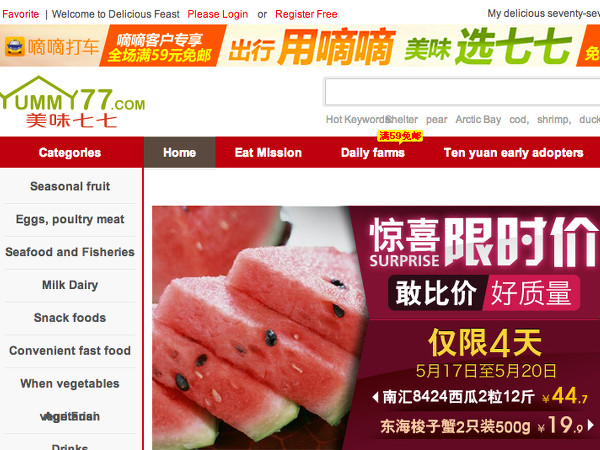 Ramping up its play in the online grocery business, Amazon has funneled $20 million into the Chinese online grocery site Yummy77, marking the first time Amazon has invested in a Chinese company. Yummy77 confirmed the funding on Weibo and Amazon revealed that the new funding will give it a minority stake in the Shanghai-based startup, which will continue to operate independently.

Like Amazon’s own grocery business, AmazonFresh, Yummy77 is focused on the growing market for fresh food delivery, so the site offers everything from seasonal fruit to seafood, beef, milk and eggs. Founded in February 2013, the company reportedly generated 100 million yuan ($16 million) in revenue in December and its user base has exceeded an estimated one million.

Yummy77 plans to use the new capital to invest in new product categories and expand beyond Shanghai.

Amazon launched its own grocery business, AmazonFresh, in 2007, but it’s only been in the last year that the business has begun to expand beyond Seattle. (I was in Seattle last fall and saw AmazonFresh trucks driving around, and the excitement I felt bordered on complete and abject lameness.) Currently, AmazonFresh delivery is available in the Seattle area, parts of southern California, and the San Francisco Bay Area.

Last month, the company launched its dry goods grocery delivery service, Prime Pantry. While AmazonFresh focuses on same-day delivery of fresh food, Prime Pantry focuses on the non-perishables, like canned foods, laundry detergent, diapers, condiments, crackers and chips, etc. Each box ships for a flat rate of $5.99 and can hold up to 45 pounds. As consumers shop, they can see how much space they have left in their box. The signature two-day shipping customers normally get with Prime won’t apply to Prime Pantry, for which shipping times will vary between one and four days.

And unlike AmazonFresh, Prime Pantry isn’t limited to a few specific locales since it doesn’t have to worry about spoilage. Prime Pantry ships to 48 U.S. states.

Also last month, Amazon revealed Amazon Dash, a bizarre new mobile device that looks like a wand and lets you scan products in grocery stores (or speak into it) to add items to your grocery list. Con: it only adds those items to your AmazonFresh list. Additional con: it’s a weird little wand thing that you would have to take with you to a store—for the sake of scanning items to order from AmazonFresh—WHICH MAKES NO SENSE. 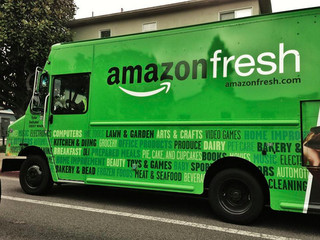