New ads will feature large photos, richer graphics and will be integrated into Yahoo's content 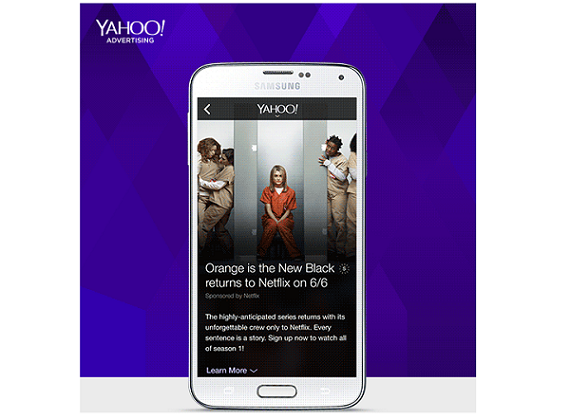 Yahoo CEO Marissa Mayer has been pretty candid in the past about how the company has missed the boat on mobile. While other Internet giants like Google, Facebook and Twitter were all making the shift, somehow Yahoo, under previous leadership, got left behind.

Mayer has reiterated numerous times, most recently during the company's first quarter earnings report in April that mobile is "pivotal to our future growth." The company absolutely has to create a strong mobile presence in order to survive.

Now the company is taking a step in that direction with the launch of mobile-first image-rich native ads, it was revealed in a blog post from Ned Brody, Yahoo's Head of Americas, on Monday.

The new ads with feature both larger photos and richer graphics, and will be seamlessly integrated into the company's content, Ned Brody, Yahoo's Head of Americas, wrote.

The new ads will native, which are the kinds of advertisements that have to have some relevant context to the environment, be in app or a game or website, in which they are run.

So, for example, a native ad could involve a publisher working directly with brands, in order to create articles that have original content, which are then promoted to the right people on social media. Or they could be an in-game advertisement for other games for the same publisher.

In the case of Yahoo, that would mean an ad for the new season of Orange is the New Black, in a story about either Netflix or the series itself.

The point is that the ads don't become intrusive and annoy people, like banner ads and display ads often will.

"While clearly marked as sponsored, the ads will look and act just like the content around them, and will appear within users’ personalized content streams, article pages and image galleries across Yahoo mobile and desktop products," Brody said. "When people tap on the ads, they can visit the brand’s site directly or view a full-screen visual for even greater interactivity and impact."

“top advertisers,” including Netflix, are already using the ads.

Yahoo has needed to change up its advertising strategy for some time now. But is this the game-changer that the company has been looking for? Not so much, according to Brian Wong, founder and CEO of mobile ad/reward network Kiip.

"Every comment about their ads is still about another spin of an 'ad.' Nothing is different, just 'larger,' 'more,' 'interactive,' all favoring the advertiser," he said.

"The biggest misconception in this industry is the further along the rabbit hole we service the perceived needs of the advertiser, we are forgetting that the user responding, actually receiving value is still paramount. A user responding favorably is what fuels the industry, yet them ignoring an ad doesn't mean that your solution to a better mobile ad experience is something that is bigger and more annoying."

Given Yahoo's "daily habits" mantra, in which they talk about being with their users all day every day, the company had the perfect opportunity to do something different, that would "define the industry," he told me. To him that means something more engagement based, or something "based on moments."

Instead, they simply went with native ads, which Wong says have been around for a long time and are nothing new.

"The more I think about the more I feel like their model is still just another mobile banner ad, just bigger," he said, though he also noted that this is a first step for the company and that perhaps it might do something more innovative somewhere down the line.