People sometimes ask me why VCs seem to invest in many of the same types of companies. Certainly, there are plenty of historical examples that demonstrate this -- from Winchester disk drive companies funded in the late 1970s and early 1980s, to marketing automation software companies in the late 1990s, to pet food e-tailers during the dot-com bubble. 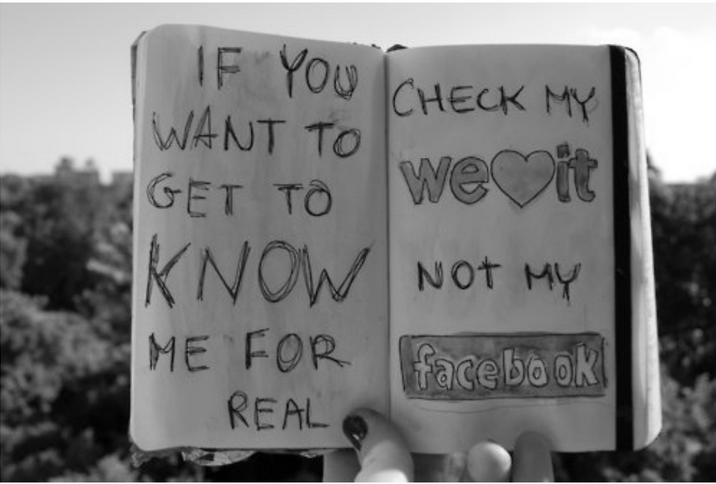 Today, social networking applications are attracting many investors, including myself.

I’m proud to be an early venture investor in We Heart It, a rapidly growing image-based social network (latest public numbers are over 25M monthly unique users, primarily on mobile).  We Heart It is a place for users to connect, get inspired, and express their creativity through images. Users can "heart" (tag) images on the Web and mobile, or upload images from their smartphones.  And they can browse on the We Heart It app and find a wide variety of images, from beautiful sunsets to interesting architecture to inspirational quotes to trendy clothes to gourmet food. They can organize images into collections (I have four, for instance: quotes, favorite ads, cities, San Francisco). They can follow their Facebook friends or complete strangers whose tastes are interesting or inspirational. Many users feel that expressing themselves visually through We Heart It is truly authentic, as indicated by the popularity of this image from a user in the Netherlands, which has been hearted over 180,000 times.

So why do investors fund what appear to be similar-looking companies? Isn't the social networking market "done"? Let me take a stab at explaining our (perhaps not so crazy) reasoning.

Now, the cynical answer -- and there are a lot of cynics opining on venture capital -- is that VCs are like sheep with herd mentality because they lack original thought and intelligence. I do sometimes wonder how any of my colleagues have managed to hold down a job, let alone succeed, based on this VC “herd-mentality” stereotypes. But that's a discussion for another day.

A less cynical answer is twofold. First, at least for me, venture capital investment is about backing founder teams in which I passionately believe. If a great team comes to me with an idea that already has competitors out there in the market, I will gladly back them if:

When I met the We Heart It team, I was really impressed by the elegance of Fabio’s design, Neil’s technical acumen, and Dan's business sense. And I embraced their vision for inspirational, creative expression through images. Since our investment, the user community has continued to grow rapidly, and the team has gotten even stronger, particularly under the leadership of Ranah and Dave.

The second, arguably most important reason why VCs invest in similar companies is market opportunity. Many of the markets that VC-backed companies target are ENORMOUS and have multiple winners, particularly over long periods of time. For instance, e-mail marketing (also known as marketing automation) has seen at least 10 winners since 1999: Rubric (acquired for over $250 million by Broadbase), Unica (acquired by IBM for $480 million), Aprimo (acquired by Terradata for $525 million), ExactTarget (acquired by Salesforce.com for $2.5 billion), Eloqua (acquired by Oracle for $900 million), Marketo (public, $1.6 billion), Constant Contact (public, $950 million), Hubspot (private and seemingly big), and probably a few others I'm forgetting. Of course, some consumer markets are more limited in size or have economies of scale such that they end up supporting just one winner, for instance Blue Nile in jewelry e-commerce.

I believe there will be more social media success stories in the future. Why? Because social media has become a primary consumer mode of engagement alongside television, movies, music, and news. Just like a consumer will listen to music through several apps or view different cable channels, she will also use different social networking apps. Remember that the average daily usage of Instagram is  nine minutes (source: ComScore) while daily nonvoice use of cell phones is 141 minutes (source: eMarketer). That's a lot of minutes left to spend texting and hearting. And visual communication in particular is growing, since we process visual information up to 60,000 times faster than text, and 75% of our brain’s sensory processing power is visual (source: We Heart It).

And just like other forms of media, different social media applications cater to different consumer needs, particularly on mobile, where switching between apps is so easy and the screen size is too small for "one app to rule them all,” e.g., LinkedIn for professional connections, Pinterest for product clipping and sharing, Tumblr for microblogging, Instagram for easy photo sharing, Snapchat for non-permanent expression, and We Heart It for inspiration and creative expression through images. Connecting with others, which psychologist Abraham Maslow called “belonging,” is an incredibly powerful, primal human need that’s integral to the Maslow hierarchy, with only safety and physical needs coming before it.

One final point: building social media applications (or any consumer applications) and running them smoothly at Internet scale is hard. As companies get to critical mass (10 million monthly active users or more), they create serious technical barriers to entry, and they benefit from network effects. We Heart It serves over 50 billion images per month, for instance.

Back to the market size. Global annual spending on advertising is over $500 billion and growing (source: Starcom MediaVest Group). In 2013, consumers bought 1 billion smartphones (source: IDC). There are many social media companies who can build enormous businesses going after this market on mobile devices.