Parchment makes it easy to send, and receive, college transcripts and educational certificates 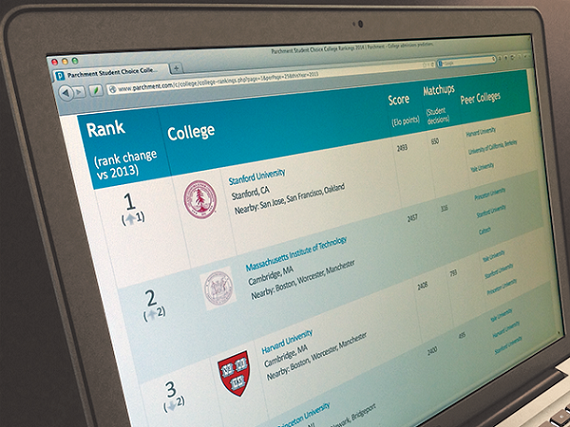 Honestly, I don't know where my high school and college transcripts are. They are probably in my mother's apartment, in a closet somewhere, underneath a bunch of other stuff. So, if anyone ever asked me for them, I'd be at a loss. I suspect most people would be in the same position.

If I ever do need to get them for some reason, then I will probably turn to Parchment, a service technology company which streamlines the request, delivery and sharing of verified credentials such as transcripts, diplomas and certifications.

The company announced on Wednesday that it has raised $10 million in new funding. The round was led by global merchant bank The Raine Group, with participation from all of Parchment’s existing institutional investors, including Novak Biddle Venture Partners, GSV Capital, Salmon River Capital and ICG Holdings, Inc.

This latest round brings Parchment's total raised to $45 million.

Founded in 2011, Parchment workes with education institutions and organizations around the country to provide consumers with a quick, easy and secure way to request, deliver and verify their transcripts and credentials.

The idea for Parchment came when the company's CEO, Matt Pittinsky was working at Blackboard, where  was the co-founder and CEO. He noticed that while most aspect of the educational process were going online, for some reason that did not apply to transcripts.

"It struck me as odd that we are innovating the educational process but  not credentials, " he said. "Transcripts are part of our everyday world, but they are not yet online."

Instead of having one place to put all of the things that make you qualified for a certain job, or even a university, instead you had to go back to each individual place to request your records.

What Parchment does is puts all of these accomplishments online, on one platform. And that is, in the end, very important because these degrees and certificates are a "currency," he said, and those that get them "ultimately want to turn it into an opportunity."

Pittinsky compared the Parchment process to OpenTable, in that it only works with organizations that have adopted it. So, if a user went to a high school, or a college, that uses Parchment, all they have to do is go to website, type in the school name and it will begin the request process. It can then be delivered directly to an employer that also uses Parchment for them to download and process

The platform goes beyond just sharing and delivering verified transcripts and credentials, though. It offers a suite of tools that allow users to access other useful information about college admissions, such as personalized college searches and weighing the chances of being admitted into a particular school.

The new money will go toward developing "data driven tools," as well as broadening out into a "more diverse set of online course certificates," Pittinsky told me.

Parchment's ultimate goal is to allow people who earn degrees, and certifications, to more easily turn them into something bigger.

"We want people to actively think about storing their digital credentials, and curating them. They are important type of currency for getting next job and getting into college," Pittinsky said.

"As people think about transitions where they are important, and the times when they do matter, like going to graduate school, getting their first job, we want them to use Parchment to benefit from that credential and turn it into an opportunity."

In addition, the number of new consumer registrations on Parchment services increased by 90% year to year, jumping from more than 800,000 registrants to nearly 1.6 million. It currently works with 5,500 education institutions and organizations.

Check out the video below to get an overview of how Parchment works: