Online education has come a long way. If you asked me a decade ago if I would ever even consider taking a class on the Internet, I can't imagine what my reaction would be. In that time, though, so many people that I know have taken advantage of the opportunity to get a degree without ever having to leave the house.

Yet, there does not seem to have been much in the way of innovation in the space. Sure there have been adaptive learning companies, but they still rely on multiple choice, question and answer, platforms.

Now comes Smart Sparrow, a company that really wants to change the way that people learn online, opening the possibilities for anyone to create an adapted learning course in any subject.

The company has raised a $10 million round of funding to put that plan into action, it was announced on Thursday, led by London-based investment advisory firm, Yellow Brick Capital, along with existing investors One Ventures and Uniseed, who has previously invested $2 million into the company's Series A. This round brings its total funding to $12 million.

Smart Sparrow's mission is to empower education, said Dr. Dror Ben-Naim, the company's founder, in an interview with me.

"We want to make the world smarter. We do that by empowering greater teachers, which we believe can solve the world’s problems," he said.

The company's platform has three characteristics that Ben-Naim points that separate it from other online education companies. First, it features rich content. Second, it is interactive. And third, it is adaptive, meaning that "the feedback you get as you interact guides the pathway through the lessons. Every next step is dynamically generated based on input."

Other elearning companies that claim to be adaptive simply pick from a gigantic pool of questions, he aid, and then sequence them on whether they are harder or easier.

"Our idea  is to be a private tutor that finds what you know and what you don’t, based your on expertise."

The platform offers educators a suite of tools to create interactive content that they can control, and change, based on the needs of their specific class. Not only does this empower the educators to design their programs based on their needs, it also allows them to create it for classes that they previously might have though impossible to teach online.

"We hear from our customers, 'I cant teach science online with multiple choice questions,' or 'I'm teaching second year thermodynamics. I need rich content,' Now they can," said Ben-Naim.

According to Ben-Naim, around 90% of online learning is still just multiple choice questions.

"The  reality is that a generation of  kids grow up thinking there are four options and that one is right," he said. "That’s not problem solving, it's a completely different skill set."

With Smart Sparrow, for example, an educator can teach nursing online by giving students an interactive patient to work on. If the student accidentally kills the virtual patient, the teacher can see what they did wrong in the analytics that are given to them by Smart Sparrow. 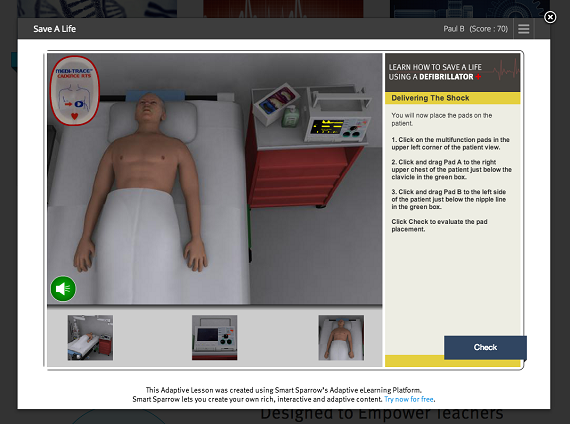 It can even be applied to the study of topics like engineering.

"Instead of picking which bridge will fall down, engineering students can get a simulation for how to design a bridge and get feedback," Ben-Naim said.

The company was founded in 2011 at the University of New South Wales in Sydney, Australia. The company is still headquartered in the city, but will be using the money to expand to the United States and move its headquarters to Silicon Valley. That means hiriing sales and marketing, as well as academic support and developers.

The Smart Sparrow suite is used in more than 400 educational institutions, including a large-scale medical initiative in Australia.