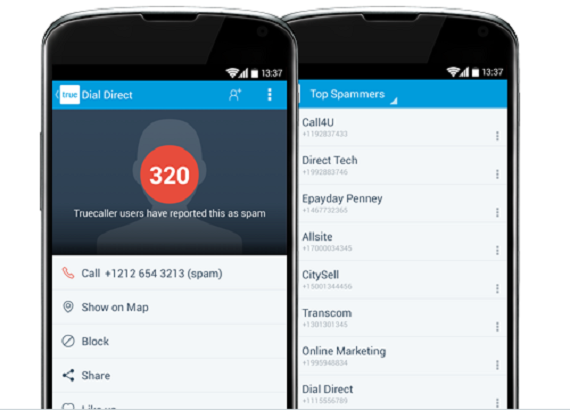 One thing that cell phones have done is take away the surprise of who is calling. Most of the time, anyway. There are still times hen someone calls from a number you don't recognize, and it can be a panic inducing moment! Should I pick up? What if its a crazy person calling me? What if it’s a family member who is in trouble and had to borrow a phone? Do I risk it?

Verified mobile phone community app Truecaller is designed to take that panic away by always telling you who is calling. And now \the service has now raised $18.8 million in Series B funding, it was announced on Thursday,

The round was led by Sequoia Capital, with participation from existing investor Open Ocean, Truecaller Chairman Stefan Lennhammer, and a private investor who the company says :is known for his high profile Silicon Valley investments."

Truecaller had previously raised a $1.3 million Series A round from Open Ocean in September of 2012, bringing its total funding to $20.5 million.

The money will go toward expanding the company's global reach, Truecaller co-founder and CEO, Alan Mamedi, told me

"We currently have a presence in almost every country, and have established ourselves as the clear category leader in emerging markets like India.  With backing from Sequoia and other leading investors, we are focused on building this mobile community and driving adoption in new markets like North America," he said.

Founded in 2009, Truecaller is a Stockholm-based service that allows its user to block spam calls to their mobile phones and help identify unknown phone numbers. It is a crowd sourced phone books, which means that users will always know who's calling them, whether its a person or business, and spammers/telemarketers are filtered out by other community members.

Here's how it works: User can searching for any number or name that is on Truecaller. They can find businesses, financial institutions, or friends in the community. Truecaller users will then be notified when someone requests their number, and have the option to approve, or deny, any request that comes through.

When someone tries to get in touch, Truecaller tells the receiver who is trying to get in touch with them, even if the number is landline, mobile or pre-paid. The user's contact list can be updated with friends' profile pictures and status updates by choosing to source information from popular sites like Facebook, LinkedIn, and Twitter.

Truecaller also gives its users access to a list of top spammers, allowing them to quickly block calls from those numbers.

"Truecaller can also be useful for customer service with faster response times on the phone, and also helping identify everyday tasks like your local taxi cab driver calling to pick you up, a restaurant staff recording correct reservations, or verification purposes with your bank," Mamedi told me.

The service is available on the web and as an app for the iPhone, Android, BlackBerry, Symbian S60, Series 40, and Windows Phone.

"The company was born out of the idea that with the advent of mobile phones, white pages would essentially be obsolete and there would be no way to find the mobile contact information of individuals," Mamedi said.

"Truecaller has been dedicated since its inception to building a robust global phone community that allows users to find mobile contact information, identify unknown mobile numbers, and put an end to mobile spammers."

While there are other similar services out there, Truecaller, he said, has a "bigger vision with other goals" than the competition.

"We have a unique people search, which is created by our Truecaller Community to assure accuracy and a genuine service. This helps identify more numbers, and at a faster pace for newer numbers or ones that have recently changed owners."

In addition, he told me "we put a lot of focus on our community, the power of the people."

The ultimate goal of the service is to put its users back in control over their phones.

"Technology has made people more anonymous- and has taken the value out of knowing why someone is trying to get in touch with you- especially through your most personal accessory: your phone," said Mamedi.

"Truecaller wants to bring back a purpose of a call so the people are more in control of making decisions based off a priority of the call."

In addition to the funding news, Truecaller is also announcing that it is integrating Yelp API data into its mobile apps, which will allow its users to identify millions of reviewed businesses globally, and also view their Yelp rating.

The Stockholm-based Truecaller previously forged a partnership with Twitter that allowed users to tweet and follow other users directly through the Truecaller app, which currently has 45 million users.