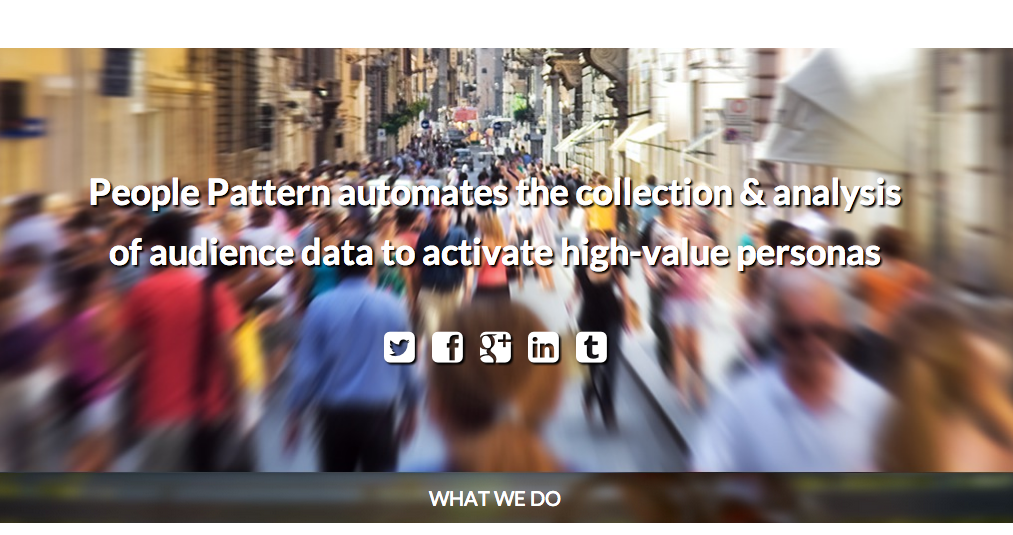 It's been said that the CMO (chief marketing officer) will have a much larger IT budget than the CIO (chief investment officer). That's because the CMO has a lot more data to sift through than ever before to help them better understand their existing clients, or to manage a company's reputation, brand, and to potentially identify new clients.

It's no wonder that $7.5 billion in venture financing went into 535 startups this year. Yet another startup in this active sector is People Pattern, which raised $4.5 million in Series A, led by Mohr Davido Ventures. Austin-based People Pattern started this past spring with a $250,000 seed round also led by MDV.

As someone who's not a big shopper, I'm not entirely a big fan of helping marketers believe they know me by offering me more stuff to buy. While I like suggestions given to me, based on my past purchases, I'm not sure I want to be clustered in a group of "Mothers in the Bay Area who are into fitness" and then get a bunch of emails about the new slimming sports gear and post-baby boot camps in the area. Yet for some reason, marketers tend to find me, I'm assuming it's based on past purchases online and through catalogs.

I'm not much of a social media user, but if marketers can already find me based on that limited information, it's intriguing to imagine what they can know in the future, based on how much information people share on social networks. Indeed, an entire ecosystem of startups has already been established to mine the data. Buddy Media, which sold to Salesforce in 2012, started some years ago to help marketers manage ad campaigns on Facebook. There's also the Dachis Group, whose founder also founded one of the first online ad companies, called Razorfish, which went public during the dot-com craze circa 1999.

In like vein, People Pattern is trying to arm marketers with more analytics from social media (LinkedIn, Facebook, Twitter, Foursquare, etc) to make their clients (retailers, and/or companies with email lists, or customers on loyalty programs). Unlike many companies that have been focused just on Facebook, People Connect is focusing on a number of networks, a smart thing given that no company should rely on one source for data.

Essentially, the startup is taking customer data (like addresses, and loyalty programs they're part of and past purchases) and then finding similar people to them on social networks.

"It's a hard challenging problem," said Jason Baldridge, co-founder and Chief Scientist.  "We take company data (e.g. addressses and names) and we search across LinkedIn, Foursquare, etc to find matches of profiles and use clustering algorithms to identify the same people (called record linking)."

Once those people are identified, People Pattern can go back to their clients with more color around their own clients. For instance, one client found out that their client base was a bunch of Christian mothers in Philadelphia talking about God, Jesus and workouts. "We can understand which conversations are important to a particular brand," said Ken Cho, co-founder and CEO. .

Over time, People Pattern hopes to get even more granular. But the big question is whether there's enough critical mass around these people clusters to make it worthwhile for a client to target these clusters. Indeed, the sample sizes can get very small. That's why People Pattern isn't just used for campaigns, but rather market research.

Their economic model is to provide enough data for lead generation or market research.

In the old days, say 10 years ago, marketers would have to go to stores and talk to individual users and take surveys. This sample would be taken back to the offices and then analyzed.

By mid-to late-2000s, Twitter, Facebook, Yelp and LinkedIn became the new surveys to get that information, said Cho. They made data available to analyze conversations. The missing link, however, was connecting people to those conversatios, said Cho. But today, the social platforms are doing a better job understanding their audience creating that conversation.

That's given companies like People Pattern even more data to make better analyses.

Said Cho: "People Connect is taking both conversation data and engagement data to understand that audience and developing a breakdown of those attributes... and potentially identifiying future customers."