Money comes in mostly from ads, but it's almost all given right back in royalties and licensing 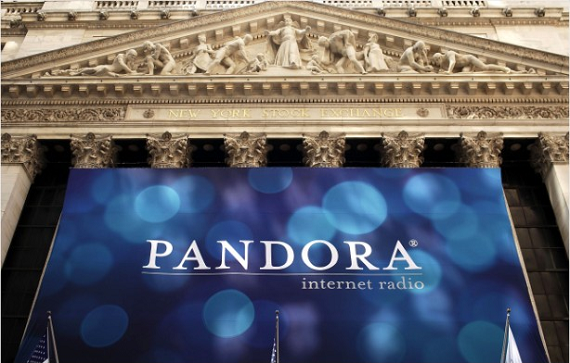 When it comes to the incredibly crowded music streaming space, Pandora stands out as the $5 billion-pound gorilla.

Having hit 200 million users in April, Pandora was able double its overall user base in two years, with 70.9 million of those users described as being "active." Compare that to the other big name in the space, Spotify, which only has 24 million active users, and recently valued at $4 billion.

Pandora is also the only music streaming-centric company to have gone public so far, and right now it is valued at $5.48 billion with a stock price of over $28.

Pandora, as you might have already guessed, has two ways to make money: advertising and subscriptions, with advertising making up 89% of revenue.

Mobile has become increasingly important to Pandora's bottom line, with mobile advertising growing 58% year over year to $104 million this past quarter.

The other $36 million of Pandora's revenue comes from subscriptions and "other." Pandora has 3 million paying subscribers for its Pandora One service, for which users pay $3.99 a month.

Since Pandora has been growing its top line 50% annually, it could see revenue hit $649 million for the full year, which is its fiscal 2014. Analysts expect Pandora's revenue to grow 40% to $909 million, giving Pandora's shares a multiple of 5x revenue.

Interestingly, despite its big advantage over Spotify in overall users, Pandora doesn't appear to care much for paying subscribers; Spotify has roughly six million of them, paying $9.99 a month, compared to Pandora's 2.5 million, paying $36 a year, or a monthly payment of $3.99.

Rhapsody, another music service, and one that is focused solely on subscription fees without any advertising, charges $9.99 a month as well. The company hasn't revealed how many subscribers it has since it reached one million back in 2011.

That shows a clear difference between those companies and Pandora, and what each of them value.

Spotify and Rhapsody allow their subscribers to select the music that they want to hear; that is the biggest benefit for anyone who pays them to use the service.

Pandora, on the other hand, doesn't allow its paying subscribers to select their own songs. Beyond higher quality audio, and custom skins, the biggest advantage is the ability to skip more songs per hour, though the per station limit remains the same.

Pandora has clearly chosen a radio model for its service. It's not a better or worse model than Spotify and Rhapsody, and investors obviously see value in the company, given its market cap. That probably has something to do with its impressive audience metrics.

As of November, listener hours for Pandora were 1.49 billion, an increase of 18% from 1.27 billion during the same period last year. And Pandora's share of total U.S. radio listening was 8.44%, an increase from 7.17% at the same time last year.

So obviously there is a lot of incentive for advertisers to put their money onto Pandora stations. But here's the real question: is it a good, and sustainable, idea for Pandora to rely on an advertising model?

The answer to the above question is that it doesn't appear to be so, and here's why: the more songs that listeners access, the more ads Pandora will sell, and the more money the company will get. That obviously works in Pandora's favor, and allows them to offer the service to its users for free.

According to a blog post that the company wrote this past summer, Pandora has to pay out $1,370 for every million songs it plays. That translated into over $250 million in 2012 alone, and those costs are only continuing to rise. In fact, Pandora has been forced to paid out more than that in acquisition costs in the first nine months of 2013 alone.

In all, for the first three quarters of 2013, Pandora's total revenue was $463 million. $378 of that came from advertising, with $85.2 coming from subscriptions. And yet, the company is currently $37 million in the hole.

That expense is the main reason that Pandora had a loss of $1.5 million for the quarter, and is operating a loss for the year so far.

This is a problem for Pandora that could get worse, because pretty soon, what it pays in those fees is going to completely outweigh what it makes in revenue, according to data from Statista earlier this year. 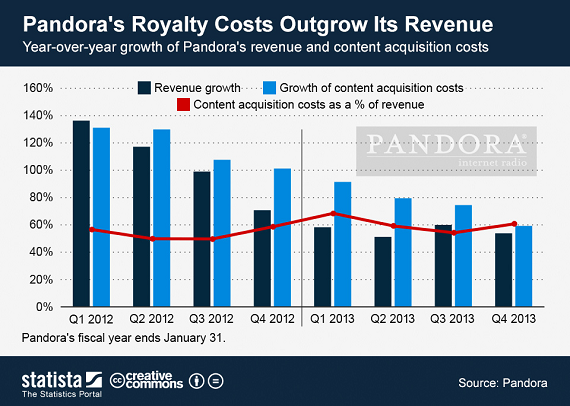 The upshot for Pandora

While some analysts are of the opinion that Pandora's stock is currently overvalued, there are also analysts who are still bullish as well, based on its ability to leverage mobile, as well as local advertising.

That includes James Marsh of Piper Jaffrary, who increased his price target on the stock from $27 to $37 following the release of last month's quarterly earnings, based on improvements in mobile, as well as a flattened competitive landscape.

"After playing defense and absorbing new competitors domestically, we expect management to go on the offense focusing on international expansion and the connected car.”

Goldman Sachs also raised its price target on the stock back in October, from $30 to $35, based on its ability to make money on local advertising.

"We believe the model can be a useful tool to illustrate the potential outcomes from Pandora's investment in a local sales force, advertising technology, and the distribution ecosystem."