Growth in mobile spending, and Facebook's increased share, push the company into the #2 position 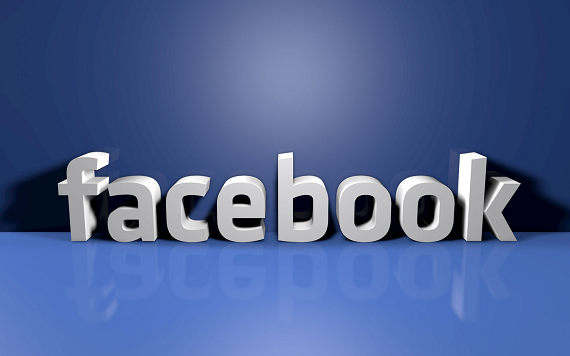 As the tech world, and digital advertising, all go mobile at a breakneck speed, it looks like the biggest beneficiary of that movement, at least for right now, is going to be Facebook.

The increase in mobile ad spending is going to be so benefitial to Facebook that it will make  the social network into the second biggest digital ad seller this year, pushing it past Yahoo and Microsoft for the first time, according to data released from eMarketer on Thursday.

Overall mobile ad spending in the United States is expected to hit $9.6 billion in 2013, for 22.5% of all digital ad investments. Facebook will account for 16% of that revenue this year, up from 9% a year ago, far above any other company, save Google. 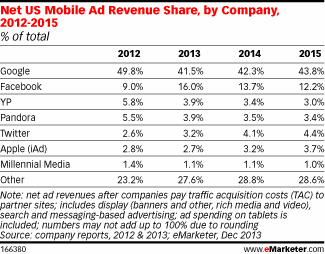 And that overall increase in mobile ad spending, and Facebook's share of it, is what is going to push it into the number two spot in overall spending.

"Based on eMarketer’s latest forecast of US ad spending, the rapid growth of mobile ad revenues at Facebook has helped make the social network the second-largest digital ad seller in the US, behind only Google," the company wrote. 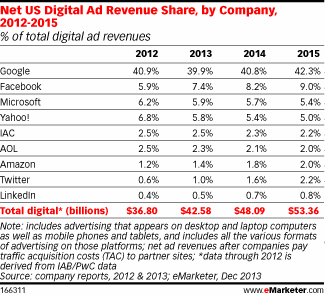 While Facebook's overall share will increase, the same cannot be said for Yahoo and Microsoft. In fact, eMarketer had originally expected that Yahoo would edge out Facebook in 2013, but, instead, Yahoo's share is now expected to decline to 5.8% in 2013, from 6.8% last year.

Microsoft, meanwhile, will see its share of ad revenue fall from 6.2% last year to 5.9% this year.

Even with Facebook's impressive increase over the past couple of year, the company in the top spot, Google, has nothing to worry about at the moment. This Google will account for nearly 40% of all ad revenue in the United States alone, for a total of $17 billion.

This news, of course, would be good for any company, but it is especially heartening for Facebook, which relies heavily on its advertising dollars to stay afloat.

Advertising, particularly on mobile, is extremely important to Facebook's bottom line. In its most recent quarterly earnings report, Facebook's revenue from advertising was $1.80 billion out of a total of $2.02 billion for the quarter.

Advertising revenue increased 66% from the same quarter last year, and mobile accounted for 49% of that revenue.