Users can create their own streams, with tweets in any order, that they can share and embed 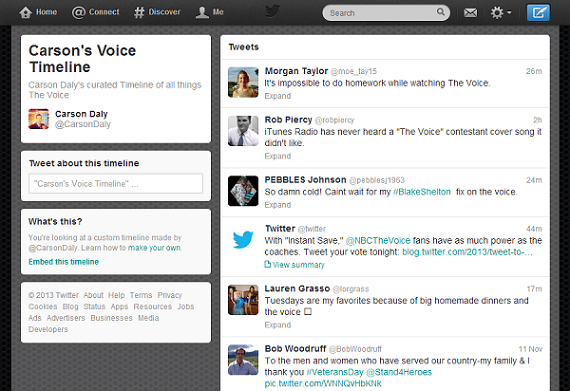 The goal of any social network is, of course, to get the right information to the right audience at the right time. For Twitter, its greatest advantage comes from the real-time feel of the network. That is why it has succeeded over competitors like Facebook when it comes to breaking news events like protests in the Middle East or storm warnings.

But Twitter can also feel a little scattered and hectic sometimes. There can be a huge amount of data coming in at one time about a topic, and shifting through it can be a headache.

That's why Twitter has introduced a new type of timeline, one that can be created and customized by each individual user, it was announced on Tuesday.

This feature allows users to create their own custom timelines by choosing the Tweets they want to include, put then in any order, name the timeline and then share it with their followers. The point being to take only the best, most entertaining/informative tweets, and make it easier for users to find them.

"Share the best tweets about a topic you care about, or an event –– planned or unplanned –– that’s happening right now," Twitter's Brian Ellin wrote in a blog post.

"Whether you want to collect the best Tweets about a TV show or help people find the latest information about fast-moving real-time situations, custom timelines let you give everyone a place to follow along."

The timelines can also be embedded into websites.

Twitter already has some examples of how this will work. For instance, there is already a feed from the Voice host Carson Daly, where he curated all the best tweets about the show that will air tonight.

Now, most likely, Carson Daly is not sitting there, on his computer, constantly looking up #TheVoice or whatever to find all the stuff to include in this timeline. He is most likely using the custom timelines API beta, which Twitter also announced today.

The API allows the user to program their custom timelines based on the logic that they choose, or building tools that help people create their own custom timelines, as TweetDeck does.

For example, Politico is using the API to create a Tweet Hub that organizes the best tweets from policy industry experts.

For right now, custom tweets can only be created through TweetDeck. The feature will be rolling out over the next few days.

Who is this for?

Honestly, I have a hard time imaging most regular people using this feature. There aren't very many topics that I care that much about that I would feel the need to make sure that all of my followers get the best information about them.

I might do it for professional purposes, such as the best tweets about the Twitter IPO or an Apple event or something like that, but it does not interest me much for personal purposes.

But you know who that would benefit? You guessed it: brands and advertisers.

Companies can create whole feeds with nothing but positive things people have said about their products. Or they can create one with people who have benefited from a special promotional offer.

Entertainment studios can create feeds that show off all of the positive reviews their movies and television shows get, or use them to, like Carson Daly, to promote new episodes. And they can include their own promoted and sponsored tweets, to make sure they hit a broader audience.

This could be a good move for Twitter, a company that, despite such a positive IPO, is still operating in the red.