The book of Zuckerberg - the story of the Internet age 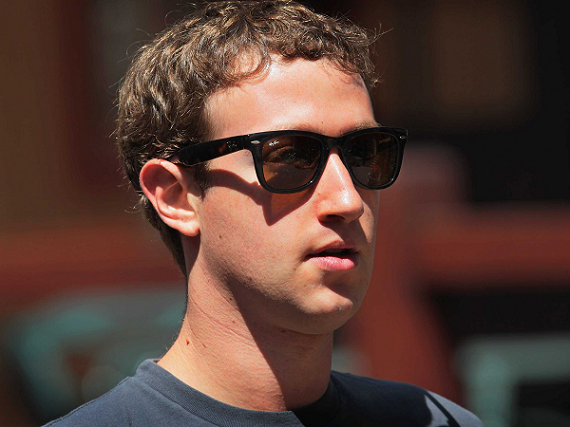 Here is a question for you to ponder: at one point does a person go beyond just being famous, to being something bigger? Almost something akin to a cultural icon.

Is it when they make a movie about your life? Yeah, that's cool but they do make movies about non-famous people too. For instance, I just saw Captain Phillips this weekend, and I wouldn't recognize the real guy if I passed him in the street.

How about when all of a sudden a website pops up that is dedicated to every single thing you say and write, in order to study it and see how it will affect the world at large?

I think we have a winner.  The University of Wisconsin-Milwaukee has created The Zuckerberg Files, a digital archive of "all public utterances of Facebook's founder and CEO, Mark Zuckerberg."

So maniacally chronicled, it's as though Zuckerberg is a living prophet, and the only way to better understand his outlook is to jot down everything he says and put it in a book. Call it "The Book of Zuckerberg."

Kidding aside, the site is actually trying to analyze his every word.

So far, it includes 50 videos of Zuckerberg that can be downloaded, as well as 100 full-text transcripts, and bibliographic data of all publicly-available content including blog posts, letters to shareholders, media interviews, public appearances and product presentations, and quotes in other sources.

Since the site is hosted by a university, that means it has certain copyright standards it must abide by. For that reason, the site gives everyone access to the bibliography and metadata, but requires "a brief description of the research project or purpose for which the materials will be put," in order to access the full site.

While these files are available freely at the source, "I'm creating this archive to collect them in one place for easy access and processing, and also to ensure they are archived for research purposes in case the source ever disappears," Zimmer said.

Obviously, given its affiliation with The University of Wisconsin-Milwaukee, the Zuckberg files has an academic spin. But that doesn'y fully get into why Zuckerberg was specifically chosen as the subject for such an in-depth site.

What it comes down to is Facebook's influence over important matters, such as how much privacy people expect, and are willing to give up, online. By archiving everything that Zuckberg says, it will presumably put him under more scrutiny, and help to gain a better understanding of his philsophy.

"A lot of my research, advocacy, and blogging has been focused on Facebook, the design of the platform, and its privacy practices and implications. Given its origin and history, and the direct control he still maintains even after the IPO, Facebook is largely a reflection of Zuckerberg's ideas and ideals for society. He seems to maintain a broad philosophy that if we're willing to share, we'll be come a better society. That's what I want to understand better by capturing and analyzing his rhetoric: what is Zuckerberg's philosophy of information, and has it changed or evolved over time," said Zimmer.

And Zuckerberg is just one of many people that could potentially be the subject of such an archiving.

"I think a similar project could easily be undertaken to look at how the philosophy of Steve Jobs had an impact at Apple. And it would be interesting to look at Eric Schmidt, Bill Gates, or others to see how their rhetoric might be reflected in the companies they run," he told me. "But I do think Zuckerberg's relationship to Facebook is unique, and that's why its worth exploring his words."

Issues that will no doubt be of great interest include how much responsibilty Facebook should take in protect user privacy, and how much privacy users should reasonably expect when putting their information onto the Internet.

So what does Zimmer ultimately want people to get out of the project? That depends on the individual,

"Different people will approach the archives differently. Some will be researchers looking at Zuckerberg's rhetoric, perhaps focusing on privacy (like me), or even how he talks about Facebook users (are they users? Participants? Customers? etc). Or perhaps try to measure how much he talks about advertising or money," he said.

"Others might try to see how his message has changed over time -- whether he reacts and changes his words based on what's happening with the company or in reaction to controversies. Others might even study his mannerisms to see how effective of a communicator he is (or has become)."

So far what has struck Zimmer is that "Zuckerberg seems to be giving more talks globally, and also speaking on issues like immigration reform and providing global internet access...broadening his focus beyond Facebook itself."

"It also seems he is becoming more comfortable -- or at least more practiced -- in his public interactions," he noted.

In case you are looking for a nice throwback, here is the oldest video on the site, a 2004 interview with a baby-faced Zuck talking about how the site just reached 100,000 people. Oh how far they've come.

Too bad they didn't have an interview with my boss Bambi Francisco, when she interviewed Zuckerberg for CBS MarketWatch in March 2005. That's a classic with Mark Zuckerberg wearing basketball shorts and a shirt that said, "My mom thinks I'm cool."